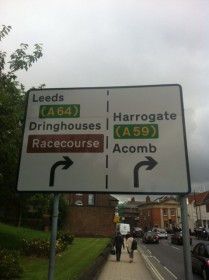 Last week I went up to York for some light horse racing action. The Mose has taken very well to working from home as a self-employed photographer and has thus managed to get herself right royally addicted to Channel 4 Racing. The superhorse of the moment and winner-of-everything Frankel was running and The Mose couldn’t resist the prospect of seeing him go, yep she was completely wouldn’t-bloody-stop-going-on-about-it excited. That racecourse also just so happens to have a brown sign, so I am officially calling this trip research.

The first horse race ever to be held at York was on a specially built horseshoe shaped track (apt) in 1731, since then its gone on to hold some of the most prestigious meets in horse racing, including The Ledger and even Royal Ascot. As you’d expect we gambled too much money and lost most of it but had an ace time anyway. My dad is very proud of his year when he lived the highs and lows of a professional gambler, but now he just enjoys the races and picking winners even though he no longer puts money on them. Me and The Mose put money on his tips though and received a mixed bag of highs and lows too, the way it should be of course. A highlight of the day was The Mose illegally climbing up behind the paddock to view her favourite horsey trotting round before his race. And here she is being illegal… 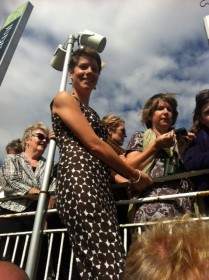 No not a hideous hat, just badly positioned big speakers over Mose's head

In true races style my companions got themselves pretty leathered and we headed into town for tankards of frothy ales (ginger beers for me) after the last race. I of course wasn’t drinking (in my year of abstinence) and predictably ended up taking my very battered boyfriend back to our hostel at 9.30pm for some much needed sleepy night nights while I read my book in my bunk until 10pm. Living on the edge man, living on the edge.

The next day me and my boyfriend (who’d had a solid 10 hours sleep and was thus raring to go at 7.30am) had a little pootle around York. I had to go and visit the National Railway Museum which, despite visiting York many times when my sister was at uni here I wasn’t such a self confessed nerd then so never went, now its a very different story… 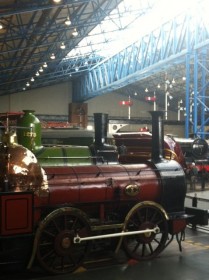 The museum is free (although I’m sure no visitor has ever got past the welcoming museum staff without parting with the recommended £3) and is absolutely massive, so worth every penny of your optional donation. There are transport treats galore in this huge place, from early steam locomotives with their unbelievable engines exposed to a Japanese bullet train, or Shinkansen if you will (which I loved and hung around in for ages). As ever the volunteers doing the demonstrations and manning the restoration and conservation of these huge and gorgeous beasts were the best part of my visit, you can even see them working away in the works gallery (which is where the famous Flying Scotsman was, being painted and tarted up for it’s next run out of the museum in a few months time).

After about 3 hours and not even seeing half the museum properly we  had to drag ourselves away and get back to my hungover sister to pat her and help her beer fear go away. As is my want however on the way back into town I noticed a little sign for a little exhibition called The Monks of Micklegate at The Holy Trinity Church. It was impossible to resist so I herded my companions into the nearest boozer and got to engrossing myself in everything that little church had to offer. The exhibition detailed the long and significant history of the monasteries in York from the 11th Century when “alien” monks of the Benedictine order came over from Normandy and set up home here.

Regular readers of the blog know that I just can’t get enough of monks. The monkish way of life appeals to me greatly. I like the quiet, the going to bed and getting up early, having a sense of purpose in life, not being dependant on an employer, growing one’s own food and of course the hairstyles. I also like history a right lot and finding out about monks in olden times always fascinates me. So I read all the information boards, trying to commit as much of it to memory as possible, then marvelled at the thousand year old stone work that was rescued when the monastery was destroyed in the Dissolution of the Monasteries in the 16th Century. I ambled around quietly on my own loving every minute and generally soaked up the cool and quiet. I then found this video on a fantastic interactive exhibit where you can explore the Micklegate Monastery as it used to be all those years ago – a bit like Sims, but with monks. I just had to video this clip of some monks rocking out in the courtyard, look they’re cutting some Saturday Night Fever shapes! Move over John Travolta, watch those Animated monks of Micklegate move!

York has lots of great places to see and endless things to do, the Jorvik Centre (a whole great attraction dedicated to the Viking invasion) is supposed to be brilliant but again I’ve never actually been. I started to feel a bit disappointed on the train home that I hadn’t, but I learnt long ago that its just not possible to try and fit everything in wherever you go and just enjoying your unique experience, even if it is small and fleeting, is what really matters. Its why I don’t like bucket lists – “Top 100 Things to Do in The UK!” or “10 Things You Must Not Miss!”, well frankly we’re never going to do them all and neither should we try. Your life is all about you and your particular experiences and choices, if we worry about not doing things other people tell us to do all the time it’s easy to overlook the greatness in the things we’ve chosen to do ourselves, or more to the point, been able to fit into our busy lives. 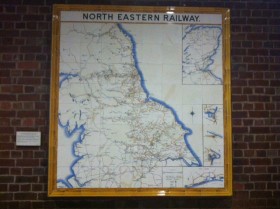 So after my church visit we ran to get our train, on which my boyfriend and sister fell asleep instantly. I did manage to clock a gorgeous tiled map of the the North Eastern Railway circa 1900 though and had a little peek to see who’d made it. I was very pleased to discover it was made by the Craven Dunhill factory where I made my very own Follow The Brown Signs tile! Everywhere is connected guys, it’s all connected, and that’s why I love doing what I do so very very badly.