Books about fishing and when enough just isn’t enough 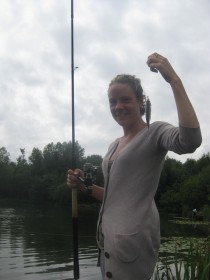 Today I’m researching the history of fishing for my never-ending exhaustive book about the pursuits one can undertake by following brown tourist signs. This leisure fishing (not fishing for commercial or survival purposes) is referred to by people with sticks (“fishing rods”) and maggots (“bait”) as “angling”. Because I’ve embarked on an absolutely enormous project with this whole brown signs malarky I’ve begun to realise that my research reflects virtually every activity of any description that has evolved from the beginning of time – from sleeping to white water rafting and about a million other things in between – and thus when I’m talking to people about seemingly unrelated subjects conversations can often turn to something I’ve discovered through my brown signs research. I’m becoming a total mine of useless but fascinating information, as my friends and family will all bow their long suffering heads to confirm.

And so it was that I was down the pub in my boyfriend’s parents’ neck of the woods (Telford, Shropshire) chatting to a very interesting (and importantly interested) man called Malcolm a few weeks ago about fishing, sorry, angling. Malcolm is a man of many talents and interests including steam trains (which sparked our friendship), gymnastics (he’s a coach at the local club), fishing and writing. He was telling me about a problem he was having with his computer and we got to discussing the document he was trying but failing to open; this document contained the weekly local fishing results. It turns out that Malcolm not only loves his fishing enough to spend as much time doing it as his wife will tolerate but he also writes for the local newspaper as their angling correspondent. I was impressed. When people have interests that they’re totally passionate about I am always fascinated by them. I want to know all about it, why they like what they do and what it is that makes them tick. I may not be very interested in whatever the subject matter is initially, but it doesn’t take very long before I’m absolutely enthralled. I can’t help but become infected by their enthusiasm and usually I’m off the next day researching and/or engaging in whatever it is we’ve been talking about the night before. I got well into fishing on a trip once with The Mose, I wasn’t very good and caught a fish no bigger than my little finger but in this situation I decided that size really doesn’t matter it was the engagement in the situation that mattered.

So after my fishing conversation with Malcolm over my ginger beer in his local (at the evocatively named Cock Hotel) he inspired me to look up the first popular book on angling written by a man called Izaak Walton called The Compleat Angler, first published in 1653. Since then the book has seen over 300 editions and millions of reprints, in fact this book has never been out of print in over 350 years since it was written. Of course I got straight onto the book and saw for myself that it does what I love the very best, an all encompassing array of history, facts, stories and quirky idiosyncrasies about a pursuit that people love. A pretty impressive looking edition is here, if you fancy purchasing one too.

While I was getting excited about my new purchase on Amazon I noticed a book on the “recommended” section of the page called Enough: Breaking Free the World of Excess, and I bought it immediately. Without even reading any reviews I knew that a thought provoking and meaningful book would be dropped through my letter box in the next 3 to 5 working days and I got to thinking about it.

The book basically states that we as human beings have adapted brilliantly over our time walking the planet to search out “more! better! faster! bigger!” throughout our evolution, it’s what made us such a dominating force in the world and not dead as the ill fated proverbial dodo. Our big old brains with their massively developed cerebral cortexes explain why we do it (more on that here), but what this books says is that in a world where we’ve reached a point in our unbelievably privileged western lives that we have way over and above everything we could ever need for survival, this drive to plough ever on, constantly getting, achieving and consuming more, means having enough feels like it still isn’t “enough”. The problem with the good old human brain is that it finds it very difficult to stop doing things it has been programmed and positively reinforced to do for as long as it’s been around and reproduced billions of times over for. And thus, even though we’ve reached a point where we’ve engineered our lives so we want for very little, live relatively easily and surround ourselves with things that positively ensure our survival – despite all this – our brains are still telling us that we need to keep striving and looking for more.

In today’s world we don’t need to use our brains to come up with complex plans to find water, hunt or plant food, keep warm in winter, get on with other humans living near us to make for a happy tribal life and generally make an all round effort to not die. But because we no longer need to do all that strenuous thinking and trying that void can very easily be filled with things that are all around us, put there quite literally to focus on, pay attention to and direct our behaviour towards, in fact in some cases they’re actually forced in our faces – of which the worlds of 24 hour TV, internet, media and advertising are examples. In themselves these things aren’t the problem, they’re a product of where we’ve evolved as a human race, but they do become a problem if they replace imaginative thought and engagement with the world. Instead of caring about deep level things like the earth we live on and our own unique role we play in it, the easier thing for our brain to have other people/things fill the imaginative thinking void for us. It’s all too easy to flop in front of the TV and focus on superfluous things that, in the end, just lead to feelings of dissatisfaction, depression and disengagement from reality, feelings we don’t like but can’t put our fingers on why we have them. The little things that we used to take pleasure in and gained satisfaction from no longer hit the spot, now it’s all about spending more, eating more, having more, watching more, getting more and attaining more just to be happy, but if we can’t take pleasure from the little things isn’t our eternal quest for “better” always going to fall short, no matter what we try?

I totally understood what this book was getting at as soon as I read the title, I think it’ll be a book worth reading so I thought I’d share it. I just think it’s so important to take pleasure in the underestimated little things, to appreciate the world around you, to celebrate it as you see it, to notice the people and environment near you at every given moment in time and to physically engage with it with your own 2 hands (and eyes and feet) as much as you possibly can. Reading lots of information on the internet, investing in iPads, doing everything in super quick time and downloading apps that save yet more time and fill your brain with loads of great things but add to your already ridiculously hectic life are all understandable behaviours (our cerebral cortexes are pre-programmed to make us do this remember), but maybe it’s time these behaviours were examined, reflected on and really thought about to see whether, in the grand scheme of things, they’re really all that important at all…

An interesting thought, no? I look forward to reading the book, but now, if you’ll excuse me I think I’ll head off for a spot of quiet fishing, goodbye 😉