In the ruins of Bayham Old Abbey

Recently English Heritage sent me a big spreadsheet containing all their 400(ish) properties in it for me to upload onto my brown sign map of the UK. In order to prevent a brain meltdown I didn’t even open the file (best to ignore big data sets in case I break them I find) and sent it straight to my web developer Olly, who had the opposite of a brain meltdown (I think he even said “cool” upon receipt) then cracked right on with uploading it onto my website. You can see the exciting finished product here. Apart from it being very satisfying to see all the English Heritage properties showing on the map it’s also good to know that I’ve completely mapped 1 of the 93 types of symbol (see them all here), only 92 categories and several thousand pins to go then… 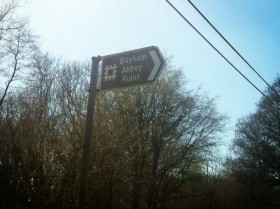 EH (we’re like that now) were also good enough to give me a media pass so I could visit their properties on my trips around the country without bankrupting myself. I spend more on my brown sign pursuits than food and rent would you believe, far more, so to celebrate my new media pass acquisition I got out the English Heritage map, closed my eyes and stuck my finger down around the south of England. At first I kept landing in the channel but after another few goes I got my closed eye in and hit upon a bulls eye; a ruined abbey in the Sussex countryside, the perfect place to run away from London and explore (for free).

Bayham Abbey, like most abbeys and monasteries in the country, fell foul of King Henry VIII during the Dissolution of the Monasteries in the 16th century and was one of the first abbeys to be “dissolved” in 1538. The abbey was originally built in 1207 by 2 failing Premonstratensian orders, or White Cannons as they are also known, of Otham and Brockley who moved in together to try to rekindle their fortunes in a secluded part of rural Sussex. Premonstratensian monks followed the Rule of St Augustin but also added in some of their own statutes which forced them to live an even more frugal and austere existence than most monks, making those White Cannons some of the most stern of the monkish orders. After its dissolution the abbey was leased to a viscount who then lost the estate after Queen Elizabeth I sold off the entire lot without warning. The abbey then passed through various owners until Sir John Pratt bought it in 1714 and it stayed in the family’s ownership until 1961 when it was given to the state. In the 18th Century efforts were made to turn the ruins into a centre piece for Pratt’s garden and the famous landscape architect Humphrey Repton (oft referred to as the successor of Capability Brown) was commissioned to design the grounds in 1785. Subsequently Bayham Old Abbey and garden was the subject of one of Repton’s most complete “Red Books” entitled “The Application of Gardening and Architecture United, in the Formation of a New Place” where he empahasised the romantic overgrown nature of the ruin with its ivy clad walls and crumbling grandeur. His Red Books were so called for their red binding and were complete works of his plans, including watercolours, sketches, research and surveys for the commissioners of his work to enjoy and keep forever. These Red Books were a unique signature of the man’s passion for his work but sadly Repton was less hands on than Capability Brown in his pushing forward the actual completion of works, so many of his visions were left incomplete or not began at all. 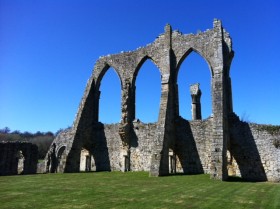 Of course in 2013 all Repton’s beloved ivy has long been cleared away to prevent further deterioration to the abbey walls, leaving a dramatic stark ruin of stone arches and towering walls to sit quietly in its rural setting. Ruins are some of my favourite places to visit and escape the world. Not only do I like learning about the monks who once lived in them, I also love the quiet lonely feeling you get in them. You’re unlikely to be surrounded by many other visitors at a ruin and those you do see aren’t the type to look at you funny when you get the urge to tuck yourself into an 800 year old wall and sit there for the best part of an hour absorbing all its history and solitude (like I did). As much as this abbey is clearly a ruin its also a ruin relatively good nick, with many of its huge walls still standing and ornate sculpted archways still fully intact and awe inspiring to stand under.

After pootling around Bayham Old Abbey in the sunshine, reading about the White Cannons and running my hands over the ancient stones I felt suitably restored and ready to embark on my return back to London. God I love a good visit like Bayham; I really am going to have to go and live out in the middle of nowhere sometime soon, in the words of the late Mr Kurt Cobain ” oh I miss the comfort of feeling lonely…”