Getting lost is woodlands trying to find some art…

After my visit to the Long Player project in Trinity Lighthouse a few weeks ago (audiovisual tour of my experience here: Long Player Project) I was inspired by my research of the composer and artist, Jem Finer, to visit another one of his music/art installations which is (quite literally) buried deep in an ancient woodland-come-arts-extravaganza near Challock in Kent.

His piece is called “A Score for a Hole in the Ground” and was inspired by the tranquil sounds of Japanese singing bowls. The installation uses a series of bowls sunk down deep into the earth that are designed to make noise when they were “played” by nature, namely when rain water falls into them. The sounds they make are then projected 20 feet up by a huge trumpet horn thing (very Telly Tubbies) to the outside world. The piece was developed to have nature as the composer and player and depending on how much rain is falling the bowls ting, pling, bong and tilt, filling and pouring out onto bowls below, making for a really interesting “song” which cannot be predicted and replicated again. Here’s Jem talking about the piece here..

I find art and nature collaborations absolutely fascinating, they’re just the most fantastic way to inspire people to think about our inextricable link to nature that can get so lost in our modern urban way of living if we don’t set aside time to really appreciate and enjoy it. 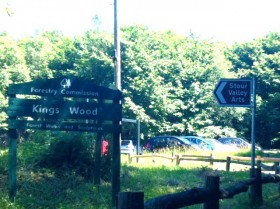 The Stour valley Arts group are the guys responsible for commissioning the arts/sculptures here and have been doing it since 1994, you can imagine my great joy when I clocked they had a brown sign. Rock on. I really hope that sign gets noticed and inspires randoms driving by to turn off the road, see what it’s all about and discover another one of the great surprises along The Brown Sign Way. No matter what they are these brown signed destinations always have something to get interested in, art is designed to provoke thought and opinion and open one’s mind so even if somewhere like here might seem inaccessible (especially when lots of arty language like “somehow engendering our relationship with space and nature” is used) what I love is that the experience of these places is wholly your own and unique to you, the point is to just go an experience it for yourself, it makes you think.

The art works are all scattered around an ancient 1500 acre woodland designated as an Area of Outstanding Natural Beauty which is home to deer, woodpeckers, night jars, adders and whole host of other flora and fauna left to do their thing and live undisturbed here. A map (which I didn’t find online until afterwards and thus didn’t print out or take with me but would highly recommended you do if you pay them a visit) can be found here.

As is always my luck with all these trips of mine I tend to inadvertently choose the most inappropriate days possible and so it was that I chose the only day this summer when not a spot of rain was falling. I decided I’d rather go and see “A Score for a Hole in the Ground” anyway though even when it wasn’t playing than not see it at all, so headed I out of the boiling heat of London hoping at any moment the heavens would open monsoon style (they didn’t) and hit country lanes like these which made my little heart sing… 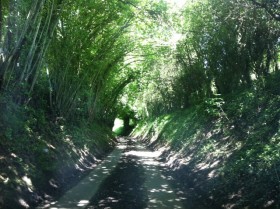 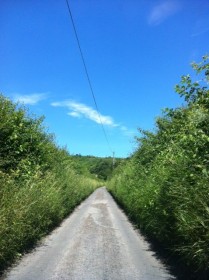 The woodland was quiet and peaceful with only a few other people in the car park taking their dogs for a walk and out to enjoy the sunshine. I always feel like a complete twat when I rock up to these places on my own but despite my feelings of twatishness I powered on through anyway and tried not to notice the looks of incredulity as I strode off into the woods alone after extracting no canine from my car shouting “I’m not mental, I’m here for the art!!!”.

There was a little map erected at the beginning the woodland path which I stood and looked at for some time, trying desperately to etch it onto my memory (which I knew would be a completely pointless endeavour but tried nonetheless). The roughly sketched map told me I needed to pretty much head in a straight line from the car park to my sculpture and after about 10 minutes of trying to grow some photographic memory brain cells I set off with happy determination. Very soon however my optimism dwindled when I hit a T-junction about 10 paces into my straight line walk, options were: turn sharp left or turn sharp right. And so began an aimless veering around that woodland, passing trees I was sure I’d passed 20 minutes earlier, heading down dead ends, walking up hills I was sure were short cuts (they weren’t) and generally flailing around in body and mind feeling ridiculous trying but not succeeding to find a big elusive Telly Tubbies style horn sticking out of the ground in the middle of a nowhere. People have been wrapped in straight jackets and banged up in padded cells for less curious behaviour.

I did stumble upon some other sculptures along the way though, my favourite were these pretty luxurious wildlife homes built onto the trees. Oh the juxtaposition of the natural unspoilt woodland with a few dirty great wildlife council flats stuck up the trees.. I wonder if those meerkats at the neighbourhood watch are complaining. 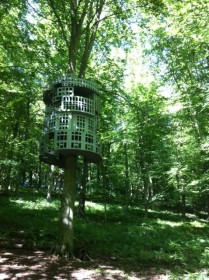 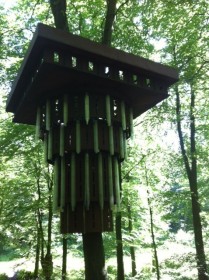 After over an hour of wrong turns and profuse sweating and swearing I sat down under a tree as Buddah did and thought. Unlike Buddah though my conclusion was to give up on the whole ridiculous escapade. I’d asked every dog walker I’d seen for directions to the “big horn” and couldn’t take any more of their funny looks. I was utterly frustrated by the lack of signs to the different sculptures and my enjoyment of the place was hitting an all time low. Maybe it was supposed to be this way and the badly signposted “sculpture walk” was designed specifically for people to amble around and happen on sculptures randomly as they walked, a very interesting concept for them, but then they hadn’t embarked on a wasted 110 mile round trip to be here, had they?

There are people in this world who say they love to get lost. Often in guide books you’ll read advice on exploring an area which goes something like this: “Roam around the streets of the old town, close your map and just go where your senses guide you. Get lost in the myriad of little winding passages and higgeldy piggedly doorways, watch the locals going about their daily business and drink in the atmosphere – that’s the way to really explore this city.” But reading shit like that doesn’t make me close my map and head out in a random direction, it makes me go “WHAT THE HELL?! WHY ON EARTH?!! Who actually does that?!” No-one in their right mind surely? Doing that is my absolute worst nightmare, actually properly getting lost in foreign territory? Not knowing where you are or where you’ll end up? Not having a map to guide you to safety or to the nearest mode of transport to get the hell out of there when the locals going about their daily business start laughing and pointing at you? Hideous I tell you, hideous. My whole life quite literally revolves around signs, I rely on them to survive, brown ones or any coloured ones for that matter. I look for signs everywhere, I need them as a reference for where I am on the planet and my relationship to it, if I don’t have them I’m lost, like properly physically and mentally lost to the world, just drifting around like a waif on the wind with no meaning or reason for being…

Suffice to say then that I wasn’t happy with the lack of signage at this woodland and I was quickly losing my already tenuous grasp on reality. I had no desire to be lost any longer than my previous 1.5 hours tootling around aimlessly and I needed to get back to back to my car (giver of all kinds of love and support), and quick. And so it was, in my most un-Buddah like way, that I sloped off, calling out to my non-existent dog whenever I passed other actual dog walkers and shot out of there as fast as my terrible car would take me (not very fast).

When I got home I looked up “A Score for a Hole in the Ground” on youtube and saw that others had succeeded where I had failed and found it. Here’s a really rather cute video of a man and his son there which shows what it’s like in real life…

I also studied the online map and found to my great dismay that my holy grail had been just 10 or so meters from me at the point where I sat Buddah-like under my tree trying to claw back my grip on reality. If I’d only turned right not left back to the car park I’d have found it. But then by that time I’d consumed all my water and wouldn’t have been able to make the thing play anyway. Such is the way of the world sometimes (or very often with me)… An interesting if a little fruitless expedition to the countryside, as always though, I recommend it.