The Alternative Brown Sign Torch Relay comes to an end 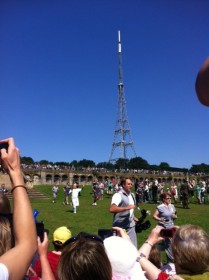 The London Canal Museum – One of my favourite museums and a hidden little joy that sits behind the congestion and noise of King’s Cross. I fell in love with canals and the romance of shire horses pulling boats along quiet tow paths here. The museum also shows the unbelievable engineering that went on over the last 20o hundred years on the British canal networks that gave us the means to export goods and fuel industry throughout the Industrial Revolution. Also there’s a big plastic model of a shire horse on the first floor which makes random loud neighing noises that scare you stupid if you’re not expecting it. Win!

Brunel Museum, Thames Tunnel – This museum is quality and celebrates Brunel’s first ever metro and first ever ocean liner. Apart from being the most famous industrialist of all time, a man who shaped the face of modern Britain arguable more than anyone else, he also has an fantastic name (one which my unborn son is definitely being called) – Isambard Kingdom Brunel, I salute you.