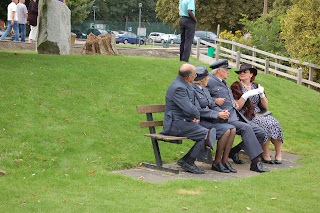 I’ve wanted to visit Bletchley Park in Buckinghamshire for some time. I like all things history, war and intrigue and Bletchley Park, where ingenious code breakers spent sleepless days and nights in make shift huts cracking the infamous German Enigma code, has to be the place to go to get all that. A good friend of mine (who also happens to be my ex-boyfriend) volunteered to come with me, good thing too, how else would I have completed the “know your planes – friend or foe?” game with almost 100% accuracy?
Having suffered in the last few weeks from a serious cash flow problem (read: cash non-existent problem) I haven’t even been brown-signing very much at all, so I was a bit nervous about talking to Bletchley Park’s Retail Manager about my project and the museum. I needn’t have worried though, she was very excited about getting her brown signs noticed, loved the thought of more visitors happening upon them, proceeded to stick stickers all over us and shooed us out to discover the vast slightly randomness that is Bletchley Park for ourselves.
The rather confusing estate consists of a number of buildings and huts which house 15 different organisations, exhibitions and museums, all scattered around the Victorian mansion house. It has a rather underfunded-school feel to it and, as the site has only recently received the money needed to restore and maintain it after years of abandonment, it also has a somewhat overgrown and derelict air to it as well. Not to worry, not everything in life has to be highly polished to get a thumbs up from me, in fact, the more smeary and bedraggled the better sometimes, I say. As is hardly ever my luck with these things, unbelievably we had happened upon the “Churchill and Enigma Reunion Weekend” which meant there were more wartime displays and activities on than normal. I was most excited about the flypast of a Lancaster bomber and the plotting table demonstration, as well as being surrounded by lots of people sauntering around in wartime uniforms, gorgeous suits and ’40s hats. Quality. 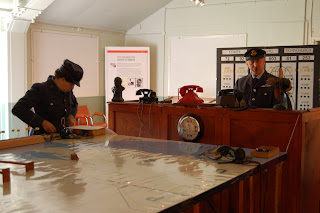 To begin we headed straight for the plotting table hut. How the men and women of the war worked so quickly with the technology they had in those days to counter enemy aircraft and prevent mass bombing from the Luftwaffe fascinates me. Doing it today with all our computer technology, satellites and superfast communication systems would be too easy but then, relying on telephones, sightings and early radar made the task unbelievably hard.
At the back of Hut 12, past the extensive exhibition about Ian Fleming’s role at Bletchley (writer of James Bond if you didn’t know, and of Chitty Chitty Bang Bang, which I certainly didn’t know) was the plotting table, complete with RAF personnel. Despite these personnel deeming the planned 11am plotting demonstration pointless as there weren’t enough people in the room (yep, it was just the 2 of us) they were very friendly and filled us in on the intricacies of plotting planes and launching counter attacks on enemy aircraft. The job was highly skilled and took all your concentration to get the most up to date details on the map which would then be passed on to relevant air bases and command posts as soon as possible. The responsibility and pressure must have been immense. These RAF personnel (and most of the people we met that day in fact) were volunteers working to keep important history like this alive and bring it to people in a really accessible and fun way. Well done Deco in Style, carry on. 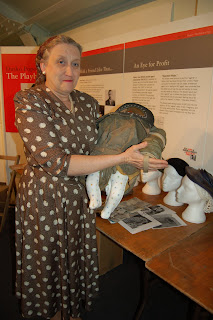 Also in Hut 12 was a varied display of wartime artefacts, including a baby gas mask (modelled here by one of the 1940s ladies and a not very 1940’s plastic baby) and government issued cigarette cases with space for cigs, matches and condoms. Apparently the allowance was 2 a month, a bit mean you might think, well apparently not because these condoms were the yummy reusable kind which could be washed out all ready for your next go, and were very similar to inner tubes. I think I’d have gone without thanks…
Next stop was the mansion house for the tour of Bletchley, an hour and half walk around the grounds with about 60 other people and a very knowledgeable guide. So knowledgeable in fact that even I began to drift off when he went into the very smallest details about Bletchley’s history. Looking back on my notes of the tour I find I have written “why doesn’t that woman just pick up her baby and rock it until it goes to sleep? Can’t she see it’s tired?!” in my notebook, which only goes to indicate my lack of focus on the tour. The best bit had to be the talks on “The Bombe”, the machine designed to reduce time and brain power needed to break the Enigma code by mechanising the process and “Collossus” the first programmable computer. Don’t get me wrong I was very interested in these things but there is no way I could understand them, and believe me I really did try. I think part of the reason I love geniuses is because I am not one, I’m very happy to appreciate their work, but please don’t expect me to relay any of it to you, I’ll be the one smiling and nodding. 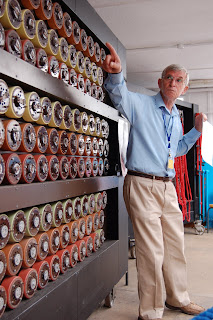 No amount of pointing was going to get me to understand, but I had a lot of respect for our guide for even trying. Sadly there were some people present who were not as happy to live in ignorance of the workings of these hardcore machines, so we sat squirming (me nearly crying at points) while old men fired ridiculously difficult questions at our guide which, of course, needed lengthy drawn out answers. In a nutshell the important points were thus: German Enigma machines  look a bit like a typewriter and were mechanical devices which turned typed letters into codes by way of a complex cog system. The cogs on the machine were set differently every day, making the race to crack the code not a single eureka moment but an endless daily task for code breakers. So complex was the Enigma machine that there was only a 158 million million million in one chance of guessing the correct code. With the mechanisation of the code breaking (The Bombe) the process was made far more efficient than relying on brain power and luck, the war is estimated to have been shortened by 2 years with it’s use at Bletchley. The British picked up over 18,000 German messages a day, any of which might contain vital information about enemy positions and plans of attack so the task to get them deciphered was of the highest importance. Bletchley’s status as Ultra Top Secret is not surprising, as is the silence that those who worked there maintained for so long.
After the tour we were left feeling mildly brain dead, overwhelmed by all the secrecy, intrigue and brain power (mainly exerted by other people), so we went for a sit down, just in time for the Lancaster bomber flypast. It was a very impressive sight this massive plane circling around and looking like it was about to crash as it banked over the treetops. I was so excited that I couldn’t even hold the camera straight to take a good picture, so you’ll have to make do with this… No time for languishing on the lawn though sadly, there was still a lot to get round. The wartime theme is clearly prominent at Bletchley but as well as the brilliant exhibitions on codes, agents, Churchill, wartime vehicles and artefacts there is also an amusing and somewhat hotch potch collection of other organisations who have set up home here, including The National Museum of Computing, The Projected Picture Trust (detailing the history of cinema), The Model Railway and Milton Keynes Amateur Radio Society.
For purely nostalgic reasons I loved the National Museum of Computing; also how can you not love a museum which advertises it’s presence with such a sweet and brilliant sign like this one… 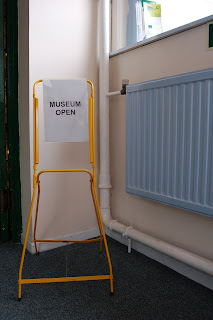 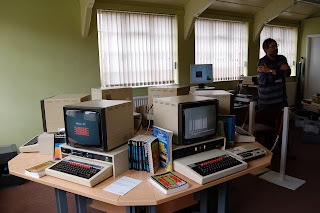 …after passing the very handmade sign you find yourself in this room and immediately shot back to 1984, quite deliberately though you understand and not just because you’re standing in a smelly hut-come-classroom with a chap with an uncanny resemblance to your GCSE geography teacher. Said man is working on setting up the “Classroom of 1984”, filled with all the hi-tech computing technology of it’s day, allowing visitors to play the BBC computer games and navigate around Britain, not by way of Google Maps but with information loaded onto laser discs that local schools all around the country helped put together back in the day. I looked up my home town of Bromley and laughed out loud at very ’80s clad people walking around the local park that I make myself run round every day. Brilliant. The National Computer Museum are asking the public for any old computers, but especially software, which will help contribute to their old skool classroom, so if you have anything up in your attic you haven’t dusted off since 1986 then do let them know here http://www.tnmoc.org/donate-equipment.aspx, you will make those chaps very happy.
The Model Railway was also a good little attraction at Bletchley, with the passion and dedication that only model railway enthusiasts have a vast track system had been laid all around their building, all ploughed by properly timetabled (never late) trains. You can’t help but love a man who talks to himself incessantly about the last train trip down a track, which is exactly what man in the picture below did. Bless. The sign reads “You are welcome to come up to the barrier. Please talk to the operators if you are local (Ayles, Bucks, Northants. etc.) and interested in model railways, particularly narrow gauge”. Needless to say we cross the barrier or talk to the operator…. 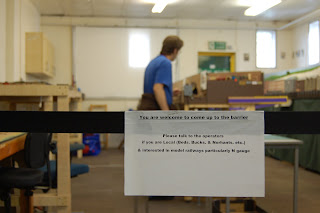 After the model railway we felt a visit to the cinema museum was in order, even if we were really flagging. It was surprisingly well equipped and full of a huge collection of old projectors with great old films being shown regularly. Sadly the smell of the little museum put me off staying that long (bit warm and sweaty in there) but with the massive amount still left untouched at Bletchley and an entrance ticket lasting a whole year I think I will almost certainly be back.
All in all Bletchley provided a seriously packed day, it is full of excellent (if sometimes a little random) exhibitions and museums (the very best kind). Despite the hotch potch feel to the place it was quite refreshing to go to a relatively big attraction which doesn’t have a big brand and honed visitor experience. It’s nice to read hand written text about things in cabinets and get approached my volunteers who want to tell you everything they can about their passions, even if that might be carrier pigeons or BBC computer software. Honestly, you should go.