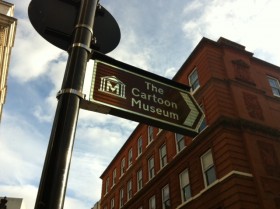 Today I happened to notice this brown sign for The Cartoon Museum, just around the corner from the British Museum. I’d never been before and you know me, once I’ve spotted a brown sign I must follow it, so we paid them a visit.

I love finding out how museums began, I find it so interesting when someone (or usually a small group of like-minded individuals) feel strongly that a subject should be bought to the attention of the general public in a place where it can be properly celebrated and everyone can see it for all its greatness. Whatever subject a museum is dedicated to is has (nearly always) been opened to help educate people and hopefully inspire visitors to think differently about something they may never have thought about properly before. This is why I herald the random following of brown signs as much as humanly possible because these places nearly always end you up having your eyes opened to something interesting and after a visit you take away knowledge that makes you think about the world around you differently (even if only a little bit, it still enriches your life). 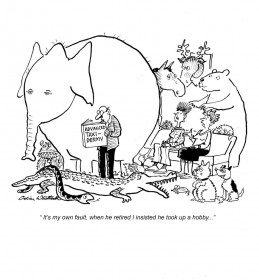 The Cartoon Museum is relatively new and opened in 2006, it is the first and only of its kind in Britain – strange really, considering how popular comic strips in newspapers are and the significant part they’ve played in British satirical culture past and present. This museum celebrates the work of cartoonists through the ages and illustrates (see what I did there?) the value of the humble cartoon – from Hogarth’s early 18th Century etchings, to the role that cartoons played in persuading the Americans to finally join the allies in WWI and the showcasing of major political events through the medium of drawings, and tells us why randoms who notice the brown sign should appreciate our cartoonists and cartoons more. 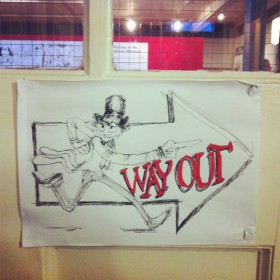 I got chatting to a volunteer at the museum who talked about how significant cartoons are in a society. She was from Poland and said there were no cartoons in Polish newspapers when she was growing up, they are just too risky to publish when governments don’t want potential trouble from its people. An editor of a newspaper has to be pretty brave to publish potentially hard-hitting pieces in such an evocative medium which will be seen by lots of people. There’s one interesting example where a depiction of a striking elecrical engineer of the 1980s was found so offensive by workers at the Evening Standard that they actually stopped the presses and prevented the cartoon, and indeed the whole newspaper being printed until it was removed from the edition. The presence of cartoons in newspapers are a great way to see the levels of freedom of speech and are an important insight into how a society views itself.

This wide range of illustrations and comics in the museum library means it can (and does) change their exhibitions frequently, they also have guest cartoonists doing talks and interactive workshops that help engage visitors with the art of cartoons.

As always there’s much more to this museum than I’ve had time to share with you, but anyway its not my job to relay a long list of things I found out there, its about inspiring you to get out there and discover somewhere like The Cartoon Museum for yourself. Make your own adventures people and get following more brown signs (and tell me all about them!) 🙂