The Brown Sign Torch Relay Day 43: Going to the dogs 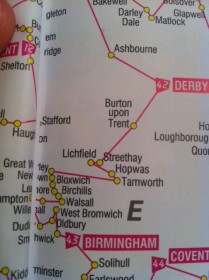 The Olympic torch goes south from Derby making some easterly detours but finally finishing up in Birmingham on day 43 of the Olympic torch relay. And so on our alternative brown sign torch relay we will be doing just the same (except we’ll be taking frequent detours when we see brown signs). I’ve had the pleasure of visiting Birmingham quite a few times; it helps when you have friends around the country if you have an all consuming travel related project like I do and whenever I visit people I always use the trips as opportunities to explore a new area.  Thus I’ve ticked off quite a few brown signed destinations around here, alrooyt yaow.

My pal Liza Minell (or “Lisa” as she’s more commonly known) lives in Harborne just outside Birmingham. I have a lot to thank my friend Lisa for; mainly the constant reminders of essay deadlines, seminars I should be attending, letting me copy her notes from lectures I didn’t go to and waking me up for exams that would’ve been stamped “Failed – AWOL” without her intervention at university. Once she doggedly banged on my door for 10 minutes to get me up before an exam knowing she was going to be late herself but also that I’d slept through my alarm after a hardcore “too little too late” study session until 4am the night before. After opening the door I remember 2 things: 1) having my trainers thrown in my face and 2) running faster than I thought it possible for a human to run in a semi-comatosed state down the street to the exam room. We arrived just in time and I sat the exam (which unbelievably I passed) in my actual pyjamas (I’m not joking) rocking out a barnet that Michael Jackson would have been proud to sport circa 1989.  And thus I put the passing of my entire degree wholly down to her. That girl is ace. 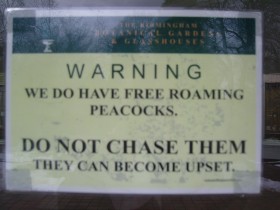 Lize lives near a few brown signed destinations including Edgbaston of historic cricket ground fame (2nd largest in the UK after Lords) and Birmingham Botanical Gardens (and where I took the photo on the left). Harborne is also near the town of Bourneville that the big hearted chocolatier John Cadbury built for his workers and the name that lends itself to Cadbury’s dark chocolate bar, it’s also where the sugar and e-number fuelled theme-park-come-chocolate factory of Cadbury’s World resides. 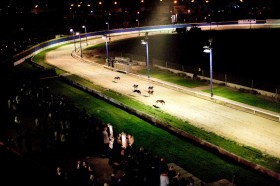 One of my favourite Birmingham (and indeed ever) brown-signed destinations is the greyhound stadium at Perry Barr. I was contacted by a chap at the stadium asking if I wanted to feature them on my blog so I called Lize immediately to blag a night at her house, only to be told she was away for the weekend. Not like her to let me down but as I’d only given her 5 days notice I decided to forgive her. Not one to be easily put off by lack of friend staying facilities I was determined to go anyway and dragged The Mose up with me. We had a brilliant evening hanging out with the dogs, seeing them dart around the floodlit track and talking to some owners. So now I’ll hand over to Perry Barr Greyhound Stadium as my brown-signed destination on day 43 of my alternative brown sign torch relay, the blog of my trip is here if you want to read. Go on you doggies.