The Brown Sign Torch Relay Day 42: Stones would play inside her head… 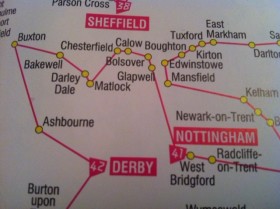 On the 42nd day of the Olympic torch relay we run/walk/jog (depending on how athletic we’re feeling on a Friday morning – not very I’m guessing) along our alternative torch relay from Nottingham to Derby. We make a big M-shape on our journey with the dip in the middle of the M taking us appropriately down to Matlock in the Peak District where the Olympic flame makes it’s way up to The Heights of Abraham (gorge, hilltop woodlands and park with campsite and various other attractions) in Britain’s first ever alpine type cable car. I went to Matlock on my brown signed trip around Britain a few years ago and probably covered the whole Peak District about 11 times I drove around it so much, but I didn’t actually know about this cool way of getting to the summit of the gorge until I left the region and got asked a few days later if I’d followed the brown sign for the cable car. No I hadn’t was the answer – Boo 🙁 I was massively disappointed not to get a go, so when I saw that the Olympic torch would be making it’s way up in it I nearly settled on featuring it on the blog, but I changed my mind. I don’t usually choose destinations that have been made a lot of in the press with lots of photos of torch bearers there, they don’t need their praises sung by me.  Instead I like to find the more obscure brown-signed destinations that are just as cool and important but don’t get half as much attention and are totally the complete joy of randomly following brown tourist signs. 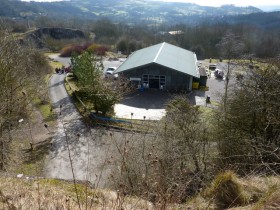 So I did my usual research and found, to my great happiness, a suitably obscure brown-signed destination called The National Stone Centre. This place has been designated a site of Special Scientific Interest (SSI) and is crammed with ancient tropical reefs (shark remains have even been found here!), rocks and minerals and also has a significant industrial heritage with six former quarries, four lime kilns and over one hundred and twenty disused lead mine shafts. Entrance to the Discover Centre is free and through the Story of Stone these guys want to tell us, the visiting public, about the significance of such special places like this in the UK. They can tell you a lot better than me why they’re worth a detour when you spot their brown sign, so this is what they say about themselves:

What I love about places like this is the initial reaction (even mine) of surprise and even a little bit of worry that a visit here might be horrendously boring. But as soon as you get there you’re suddenly shot into a world you haven’t given much thought to before but then start learning interesting things like how our world has changed over millennia, how the landscapes we live in have been shaped through the different ages of our planet and how genius scientists have found ways to explore it. Then suddenly it’s not so boring any more and you just can’t help but get enthralled (well I can’t anyway).
My ear worm of the day is now, of course, Stones but the firm favourite of female contingent of the Hone family (me, The Mose and my mum), Neil Diamond. I thank the Lord for YouTube and the ability for me to embed the song below and make it your ear worm too. Thank you God also for the people who put together the cheesy-verging-on-frightening Powerpoint type presentations that nearly always accompany them, enjoy 🙂
« Older blog
Newer blog »