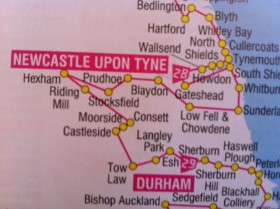 Another very quick shout out today for a brown signed attraction that lay along the Olympic torch relay route from Newcastle to Durham on Saturday. I’m tres behind with my alternative torch relay because apparently when your restaurant might or might not be closing you still have to work doubles on one of the busiest days of the year (Father’s Day) and pretend you haven’t run out of food when you have, look professional, smile at people who are furious at you and try not to run downstairs and kill yourself quietly in the staff room. I didn’t kill myself but I did sacrifice blog writing and for this I am truly sorry. 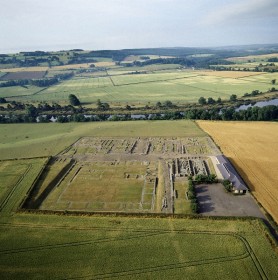 So my brown signed destination for day 29 is the English Heritage managed Corbridge Roman Town in Northumberland, about 4 miles from Hexham. Corbridge, or if you were a Roman “Coriosopitum”, was the most northerly town of the Roman Empire. It was a garrison town and once had an important string of forts close by and was well equipped with all the amenities an average Roman soldier needed to live a happy Roman life. When the Roman Empire fell during with 4th Century the town was abandoned but excavations of the area have brought the old town back to life. Now visitors can walk along the thousand year old cobbled streets and imagine the buildings and traders who made their livings here. The main drag would have been home to a fountain house (similar to a Roman bathhouse), granary, temples and workshops. Hadrian’s Wall was built just north of the town around 200 hundred years after the first fort was established and then it became a place where off duty wall guards could come and let off steam (I don’t know whether they let off steam to be honest, I think I’d want to let off steam if I was in a wall garrison though so I’m imagining lots of steam letting in Corbridge 1000 years ago).

Some archaeologically significant finds have been unearthed at Corbridge, including a “The Corbridge Lion” which is a stone carving of a male lion just about to devour some poor dead animal with it’s tongue hanging out dating from the 2nd or 3rd Century. It was first a funerary decoration for a Roman tomb but was later used as a fountain when someone (I’m guessing a Victorian) drilled holes in it and out of it’s mouth to allow water to run through it. The lion didn’t make it as a fountain though and was found abandoned in a water tank in 1907. It finally rests at the Corbridge Roman Town Museum on display for all to see.

Roman remains that have been excavated even a little bit are brilliant places to go to fuel one’s imagination. It’s hard to think about the Roman soldiers, average people, smells, sounds and buildings that existed in Corbridge 1000 years ago, but its important to try. English Heritage always do a brilliant job of inspiring people to really think about these places that played such important roles in British History and visits to places like this are the kind of days out that stay around in our memories. They really mean something, so follow the brown sign to a site with Roman remains next time you see one, it might not be a lot to look at now but when you get to thinking about what it used to be, well that’s when it starts getting interesting.