Random Brown Sign of the Day – The Darlington Brick Train 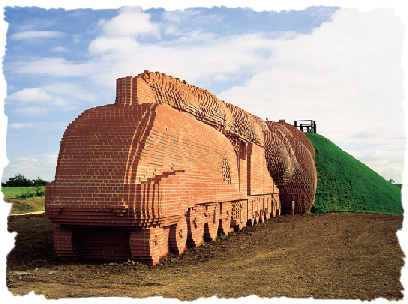 Exactly what it says on the tin: a massive train made from bricks just on the outskirts of Darlington, or more precisely “situated next to Morrisons on Morton Park Industrial Estate” it’s location is rather depressingly described on thisisdarlington.com tourist information website.

Interesting when you learn a little more about it though so here’s a little about what they have to say:

The sculpture was built in 1997, designed by David Mach, to celebrate the rich railway heritage of Darlington.  The adventurous can climb to the platform overlooking the train from above. The sculpture is signposted from surrounding roads (those’ll be the brown tourist signs people!)

A total of 185,000 bricks were used in its construction along with 170 cubic meters of concrete. The train weighs 15,000 tonnes and covers an area of 600sq meters. It is of hollow construction and measures 23ft high by 130ft long. It took a team of 34 brick layers, labourers and apprentices 21 weeks to build.

In addition, there are even 20 special ‘bat’ bricks built in at various places to encourage the nocturnal creatures to use it as their home. Local schools also donated ‘time capsules’ which were put inside the train.
Bat bricks, time capsules, car parks and trains. Brilliance through the medium of brick, I love it. The little brown signs might not grab your attention straight away for this little oddity but given the time to tell you about itself this brick train becomes something amazing and unique. And there’s so many more brown-signed attractions out there just like it, begging you to pay attention to them and turn off the road to discover them.
« Older blog
Newer blog »