A little history of ice skating 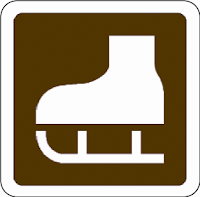 It was the long cold North European winters that inspired the invention of the ice skate. The earliest known example is over 5000 years old and was found at the bottom of a Swiss lake (I assume the chap wearing them rather overestimated their capabilities) and were fashioned from animal bone and leather straps which attached to the skaters shoe. Early records indicate that ice skaters using poles to propel themselves across frozen lakes and rivers “as swiftly as birds” was a common sight in the colder climes across the North Sea. Consequently ice skating was positively old hat on the continent by the time Britons really started getting excited about it in the mid 1600s, when social trends and weather conditions changed the notion that is was just a bizarre activity one hears about foreigners doing in far away lands.
The Royal Family were the ones who really gave ice skating it’s popularity boost and made it the pastime to do and be seen doing. During the civil war when they were exiled to Holland the Royals learned to ice skate, and rather well too it seems. King James II particularly developed quite a penchant for the sport and on his return to Britain when the monarchy was reinstated he held ice skating displays for the British aristocracy. During the cold winters of the 1600s the Thames frequently froze over giving rise to “Great Frost Fairs” where Londoners and Royals alike could engage in ice skating, fuelling it’s appeal; in fact it was through the sport that Queen Victoria got to know her future husband Albert while out on a number of skating trips.
The first ice skating club in the world was founded in Edinburgh in 1743. Applicants to the elite club were required to pass a rather taxing test of skating in a full circle on one foot, then again on the other foot, after which they must jump over one, then two and finally three hats all piled on top of each other. An impressive feat I think you’ll agree, especially as hats were pretty tall in those days!
Ice skating in Britain, although popular, was to remain an exclusively winter activity for another 200 years until significant advances in science and industry made it miraculously possible to permanently freeze water and create an all season, all weather skating surface. 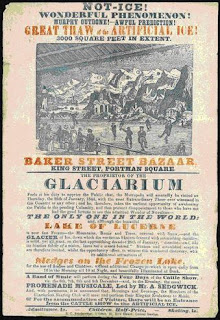 A Mr John Gamgee was the man who first employed his patented freezing techniques (originally invented to preserve meat for export to Australia and New Zealand) on a grand scale when he opened the world’s first “glaciarium” (what a brilliant name, don’t you think? Far more romantic than a “rink”, I might ice skate more often if I could say I was “popping down to Streatham glaciarium”). In a tent just off the King’s Road he opened The London Glaciarium in 1876 which was shaped like Lake Lucerne and had paintings of mountain scenery adorning the walls (presumably in the hope that skater’s would feel suddenly shot straight off to the Swiss Alps as soon as they arrived). Modern day ice rinks still use similar (but considerably more advanced) mechanical freezing methods to Gamgee’s, which over night turned a pastime whollly reliant on the weather into the all year round attraction we know today.
Researching the history of attractions as part of my book has been a really eye opening experience. In today’s society where virtually anything is possible, it is easy to forget how different life was and how much we take what is available to us for granted, and strangely we have all these possibilities yet, because they are no longer novel we seem not to notice them. How I would have loved to have been alive in Victorian times when all these new things were being invented, how brilliantly exciting it would have all been.
I know it’s early August, but purely because I can, I think I fancy a spot of ice skating today, who’s with me?