The abandoned theme park of Camelot 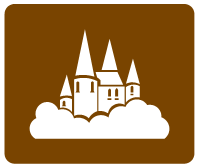 This symbol adorned the brown sign pointing to a theme park called Camelot, in Lancashire. I remember trying to find out what it was a few years ago when my friend Simon at Buchanan Computing sent me a road sign design software package with lots of “locally approved” unique brown sign symbols pre-loaded onto it (he knew I’d really like them you see). Unsurprisingly this symbol caught my attention and so too did it capture @gars_grumbles imagination. She tweeted me yesterday:

@lovebrownsigns flipping through your blog and saw the unique princess castle sign!! Where does it lead?! Eeep

I googled the theme park to send her a link but was intrigued to find it had closed after the summer season of 2012.

Opened in 1983 Camelot was based around the legend of King Arthur with a medieval theme, including rides such as Excalibur, Kingdom in the Clouds and Knightmare. It was also the only place in the UK with a dedicated full time jousting arena. After some researching though press articles showed that it had a chequered past. Latterly it had gone through a period of bad management, lack of investment and plummeting visitor numbers, which I’m sure couldn’t have been helped by a number of serious accidents that occurred at the park. One accident was fatal when a member of staff working on the track was hit by The Gauntlet Roller Coaster in 2001, caused by a lack of proper safety procedures in place. Inevitably it’s reputation would have been tarnished, probably a contributing factor in it’s decline. The site has now been sold for housing development and rumours abound that the money needed to pick the park up simply wasn’t invested because the profit return for selling it on to developers was far more lucrative than running the site as a theme park, which seems so sad to me.

Man-made abandoned places are haunting. There’s something spine-tingling exciting about a place that was once thronging with people and voices but now sits deserted, quiet and decaying. These’s loads of great books and websites on abandoned places, a quick google image search illustrates just how many, as an example there’s a great series called “Dead Amusements” here or have a look at 28 Day Later urban explorers forum. Demand for Chenobyl tours continues to grow and the viral nature of photos of the decaying Detroit shows just how much these places capture our imagination.

It was the photo of the ss Great Britain, scuttled and abandoned in her lonely cove in the Falkland Islands that really sparked my interest in the old ship when I visited recently, despite the fantastic restoration and the ship all her glory greeting me when I arrived. It is the forgotten places that are brought back from near complete demise that I love celebrating on the blog and usually it’s only through the dedication of a small group of people that make it happen, who know that saving a piece of the past is so important in our comprehension of our present and future. Often they’re are a part of our industrial heritage like windmills, canals and railways that have been left behind in the wake of lightning speed technological advances and now seem to look redundant in a modern age. But actually when they’re revived and given a new lease of life and run for enjoyment of others they become more relevant and engaging than ever. 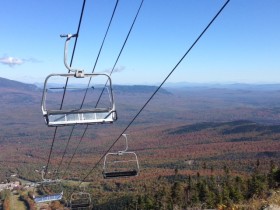 While walking in the mountains in Vermont last year our trail crossed a mothballed chairlift, not open for the summer but simply sitting quietly waiting for the first snowfall of winter when it would start taking skiers up the mountain for the season. The chairs hung from their big steel wire, rocking gently in the wind and probably because I wasn’t expecting the sight, I had to stop and catch my breath when I saw them. As I stood and looked at all the chairs running up and down the mountainside it was almost like, with a heavy creak the lift would start moving again at any minute and I had to pluck up the courage to take a photo of them and walk underneath! Somehow seeing the chairlift in its inert state made me appreciate it all the more and maybe that’s one of the reasons we are drawn to such abandoned places. Creepy cool, I felt like I’d shot straight into a Stephen King novel…

These scary abandoned places give us the urge to jump right in and start exploring them and urban explorers who want to “document the decay” have great photos of their adventures. You can find some photos of the abandoned and soon to be completely destroyed Camelot here and obviously totally illegally these guys videoed their exploration mission (complete with genius Lost Boys sound track, lots of goofing around and whispering)…

Maybe I should start the sideline blog “brown signed destinations now closed”! I wonder if the brown signs have been taken down, anyone know?!