I first started this big old brown sign project of mine to celebrate the fantasticly varied and endlessly fascinating destinations across Britain that can be found simply by following a brown tourist sign, unsurprisingly then my project has immersed me in the vibrant heritage and cultural scene, but I have also often found myself immersed in the seemingly less exciting world of road regulations, traffic sign design and “roadside furniture” management. As everyone knows though I’m a massive nerd, just give me a paragraph to read on any subject, from ants to zorbing and I’ll probably be out buying the seminal work on the matter (preferably in hardback) within minutes. So I have to unashamedly admit that my ears prick up whenever I hear discussion of the halloed “Traffic Signs Regulations and General Directions” or “regs” to those in the know. It is the holy grail of traffic sign regulations published by the Department for Transport which standardises Britain’s road signage. 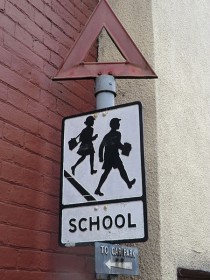 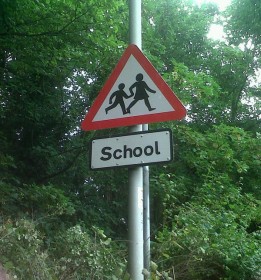 It was first published in 1957 and was revolutionised by the infamous Worboys Commitee Report of 1963 (that followed the Anderson Report on Motorway signing) which sought to rectify problems with willy nilly* signage, develop motorist-friendly road signs and bring in safer signals (*don’t quote me on that term) that no longer confused people. So out with the expensive and oft confusing signs made of cast iron and in with the new wave of warning signs, junction indicators and directional signals that we now all know and take for granted today. The TSRGD has become a revered bible among those working at The Highways Agency and employees of road and traffic departments in local councils everywhere, but also to members of the Society for All British and Irish Road Enthusiasts (or SABRE, not joking, they really do exist).  The “regs” are where all the symbols authorised for use on brown signs are listed, along with a whole world of other signs you’ll have seen on any British road ever, have a look here and get immersed too.

This year the government are having an open consultation on the TSRGD for their newest update to be published in 2015. There are various recommendations including limiting the use of “loading” signs in parking bays, removing the “at any time” signs on double yellow lines and giving more freedom to local councils to decide on the illumination of certain signs at traffic junctions (hard-hitting stuff, I know). Of course what I’m interested in though are the bits to do with brown tourist signs, and to my great joy there are some welcome recommendations concerning the definition and implementation of brown signs in this one, and they go a little something like this:

7.6 In Scotland and Wales, Visit Scotland and the Wales Tourist Board must recognise individual tourist attractions and facilities as qualifying for a brown sign under TSRGD. However, Visit England does not carry out a similar function for tourist attractions in England. This has brought pressure from private enterprises, such as retail parks, on traffic authorities in England to represent their business as tourist destinations on traffic signs. This can lead to unnecessary sign clutter.

7.7 To help with this, we propose to include a new definition of a ‘tourist destination’ in TSRGD, to separate those genuine tourist destinations – i.e. those whose primary function is other than retail – from businesses with a purely commercial interest.

7.8 This will need the help of Visit England in agreeing to recognise genuine tourist functions in this way. We have been in discussion with them, and they have agreed to consult with the tourist industry in parallel to this consultation. ” 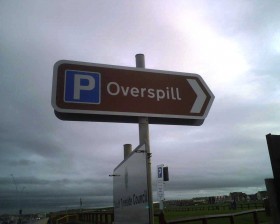 These recommendations are good because they incorporate a multi-disciplinary approach to the allocation of brown tourist signs, which has been pretty loose and ad hoc in the past. I’ve been sent many an example of brown signs pointing the way to shopping centres, supermarkets and a whole host of other questionable “tourist” destinations and it’s good that there will now be formal guidelines that, hopefully, define what a tourist attraction really is. If you want my opinion brown signs should guide people to places that offer inspiration, engagement and the chance to do something fun for fun’s sake, the desire to make money just for private profit should not qualify getting a signpost. 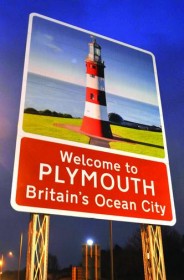 The other exciting news from the TSRGD 2015 consultation is the implementation if these new boundary signs (left). I have to say I was sceptical when I read Jeremy’s Hunts plans for new signs for counties, in a press release in 2012 he said:

“The current signs greeting visitors as they travel around are dull, often boring and do little to entice tourists. We need to update them to something that is both attractive and better at selling what it great about our tourist destinations… The new signs will give a fresher and more welcoming feel to England’s regions. Counties will be able to highlight the things that make them special, whether it’s cultural or heritage attractions, or an activity that is special to the area.”

It worried me a bit that photographs would be used to address these issues because potentially in years to come I had visions of motorists driving by these depressingly dated and faded signs, making the destinations even less inspiring than before. It would be similar to the feeling you get when watching the opening scenes of Bergerac or Inspector Morse, the ’80s number plates and people wearing global hypercolour t-shirts scream “this is gonna be boring!”, even if the episode is actually a good one. Symbols on the other hand, well designed ones I may add, can stand the test of time. I don’t know about you but I could sit admiring the stylised duck or swooping owl of the brown sign symbol indefinitely… OK maybe that’s just me, but you get my point.

To my great joy though the new boundary signs, which have only so far been put up in Devon are actually pretty nice. The feedback has clearly been good and the TSRGD 2015 recommends rolling them out across Britain. Here’s what that good old bible says about them:

7.2 We are introducing greater flexibility to the design of boundary signs, to enable authorities to foster a better sense of place, and the historic and geographic qualities often associated with particular areas.

7.3 To enable this, the new TSRGD includes the ability to sign historic county boundaries. Authorities will also be able to put up boundary signs for designated geographical areas such as National Parks and Areas of Outstanding Natural Beauty.

7.4 In conjunction with the Department for Culture, Media and Sport and signing manufacturers, we developed new designs of boundary signs aimed at promoting a greater sense of local identity. These signs incorporate photographic images and are a new and radical change to the traditional sign design process (see figure 7.1). Following a successful pilot in Plymouth, these signs have attracted a considerable amount of interest from other local authorities and are included in the new TSRGD.”

So that there was your update on the new recommendations for the Traffic Signs Regulations and General Directions 2015 ladies and gents, do get involved in the consultation if you’d like to, you can do so here until the end of June 2014, if you are a tourist destination wanting a brown sign or if you have any views about the new policy it’s really important they hear your voice.