Dr Jenner: Destroyer of the small but deadly pox

Reader, I’ve moved. At the end of February we swapped an expensive chicken coop of a flat and the often terrifying (for an introvert like me at least) streets of South London for a small cottage on a farm in deepest darkest Gloucestershire. It’s deliberately out of the way. My property search involved identifying the biggest areas of white on the road map (where there is nothing) and waiting stubbornly until a rentable property came up therein. Very frustrating for my other half I could tell but when I played the mental health card he soon piped down.  My uncompromising determination to ensure we lived where other people are not paid off at the 11th hour and now I sit quietly looking out onto green fields on which a few sheep graze and a deserted lane where only the occasional tractor does pass. Apart from a light bleat and twittering of birds the silence here is deafening and I dance around ecstatically to the sound of it daily. London you’ve had your knotted-stress-induced pound of flesh from me, I bid you a very big and heartfelt so long…

Exploring my new surroundings has of course mainly come in the form of me randomly following lots of brown tourist signs, I’ve been doing a lot of that lately. Brown-signing helps me place myself and connect with wherever I am in the world by learning its history or discovering something unique and brilliant which makes it different from anywhere else I could be. I’m always so fascinated by this amazing planets constant ability to pull something cool and surprising out of the bag in the unlikeliest of places, and so it was, on my way to the Co-op for a pint of milk and crumpets in the nearby market town of Berkeley, I spotted a brown tourist sign pointing to Dr Jenner’s House and Museum. Hazy science class memories reminded me that Dr Edward Jenner had been the quiet country doctor who became the father of the vaccine, proving (in a rather unethical but fortunately successful way) that by deliberately infecting a local boy with cowpox he became resistant to the virus’ deadlier cousin smallpox, changing the world forever. 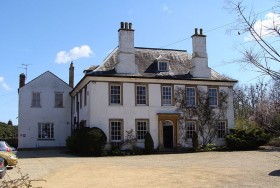 The museum is housed in Dr Jenner’s former home, The Chantry, near Berkeley Castle (where, incidentally, the last court jester of England died when he fell from the minstrel gallery while entertaining the court, slapstick to the extreme). The house pays homage to Dr Jenner and you can also explore the well kept gardens where he did a lot of his experimenting with herbs and plants. His original vinery still exists where a cutting from Hampton Court Palace’s longest vine in the world still grows, producing grapes every summer. At the bottom of his garden Jenner had a unique little thatched hut built where he vaccinated local children and the poor against smallpox by giving them a stab of the cowpox.

Jenner was a determined fellow and despite being rebuffed by the Royal Society when he first presented his ground breaking findings in 1796 he so strongly believed in his new discovery that he went off to self-publish his work anyway, only then was he able to get his work noticed by the medical profession and the rest of the world. He was finally given a subsidy from the government to continue his research in microbiology and his vaccine was eventually accepted as an appropriate preventative treatment for smallpox by the Royal Society in 1840. Europe was quick to catch on and soon the vaccine was being utilised on a global scale. Jenner wrote in his journals about how impressed he was with the missions leaving British shores laden with puss samples of cowpox to begin the elimination of smallpox across the globe, he wrote “I don’t imagine the annals of history furnish an example of philanthropy so noble, so extensive as this”. Napoleon himself minted Jenner his very own medal to thank him for his discovery and soldiers in military campaigns of the time were some of the first to be free of the terrible disease through vaccination. President Thomas Jefferson also wrote to Jenner “yours is the comfortable reflection that mankind can never forget you have lived”. After his death a bronze statue of Jenner was placed in Trafalgar Square to honour him, since then however it was moved to Kensington Gardens as he wasn’t a military man like the others standing proud around Nelson, despite the fact that his discovery led to more saving of human life than any thing else in history.

The incredible value of Jenner’s discovery and subsequent work on the eradication of smallpox cannot be underestimated. Smallpox had been the “scourge on humanity” and most feared disease for thousands of years, the first clinical evidence of the it comes from Chinese records of around 1100 BC and the mummified face of the Egyptian King Ramses V also clearly shows small pox scars. The increased movement of people around the globe, mainly developing trading links, helped spread the disease significantly. Over the centuries the number of people contracting and dying from the disease began to rise. During the 20th Century it is estimated to have caused between 300 and 500 million deaths, around 400,000 a year in Europe (including five reigning monarchs).  It was only in 1979 that the smallpox virus was eventually declared extinct, with no natural occurrences of the disease recorded since and it is still the only infectious disease affecting humans to have been completely eradicated thanks to monumental achievements of the Smallpox Eradication Programme by WHO (the World Health Organisation). 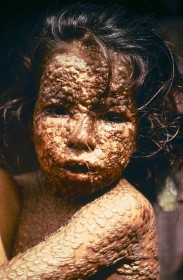 The immunology exhibition put on upstairs in the museum describes in gruesome detail the ugly truth of smallpox, with the help of some pretty vomit inducing pictures of great big pustules proliferating all over some very ill looking people, no need to use your imagination here peeps (sorry for the graphic graphic but doesn’t it show just how horrifying the disease really was?). As a terribly squeamish sort I tried not to collapse on the floor while reading the information boards because I’d become so weak thinking about getting smallpox. It’s just unbelievable to think how catastrophic the disease was to the whole of the human race, it affected people from every corner of the world and one of the things I found most fascinating at the museum were the different reactions that various cultures had to the deadly disease. 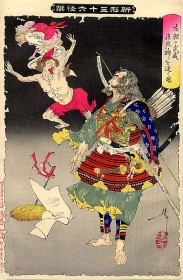 In China the goddess of smallpox, T’ou-Shen Niang-Niang, was popularly thought to have the ability to infect or cure people as she chose and it was believed that attractive children were her preferred victims. As a result children went to bed with grotesque masks covering their faces in the hope she would pass over their beds at night. In India the lucky Hindu goddess of Sores, Ghouls, Pustules and Diseases was Shitala, popularly depicted riding a mule. In a bid to encourage Shitala to spare villages of smallpox villagers would often sculpt Goddess Shitala from clay riding an elephant then leave the offering under a tree or in a clearing just outside the village in the hope that when she passed she’d be pleased by her elevated status on an elephant and not infect the village. In Europe, Africa, Latin America and Japan it was a commonly held belief that the smallpox demon caused the disease (a wood block print of the Japanese smallpox demon is shown above). In all these cultures the demon was believed to be scared of the colour red so victims and their bedrooms were daubed with red paint and fabric. Both Charles V of France and Elizabeth I were draped in red clothes and blankets when they contracted the disease. Some scientific credibility was given to this notion when it was found that red light apparently lessened the severity of scarring from smallpox and the belief persisted as late as the 1930s.

Now the deadly smallpox virus can only be found in 2 scientific laboratories in the world, one in America and one in Russia, both approved WHO approved sites. Despite calls for the smallpox virus to be destroyed forever these countries continue to hold the viruses, they say, to further our understanding of other diseases such as AIDS. The possible accidental or even deliberate release of the virus means it must be kept in secure labs with countless safeguards against any possible leak. Although the possibility is said to be unlikely the potential for smallpox to be used in germ warfare is still a big ongoing debate. Have a read here to find our more and scare yourself absolutely senseless. 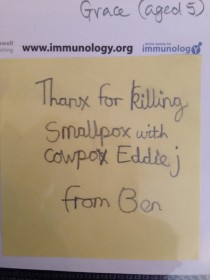 I left Dr Jenner’s House and Museum fully clued up about the unbelievable steps we’ve made as a race since the discovery of the first vaccine, with not just smallpox eradicated as a threat but a whole host of other diseases kept at bay to this day through the wonder of microbiology and knowledge of germs. It doesn’t take too much of a leap of the imagination to appreciate the amazing feat that Dr Jenner kickstarted, it would be similar now to a miracle cure being found for Cancer tomorrow, with a subsequent dramatic decrease in cases in our lifetimes and then not one death from the disease in 4 or 5 generations time. Spectacular.

Ben, I think you speak for us all…