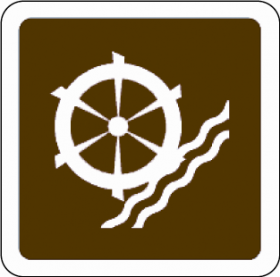 On Thursday last week I had the pleasure of driving my parents down to the docks at Southampton to embark on their yearly cruise. It was a great excuse to go brown signing with The Mose on the way home, so we did what we do best on these trips and kept our eyes peeled for brown signs, giving big whoops of joy when we saw one. We were deciding on a choice when we spotted the brown sign for Eling Tide Mill in Totton. It has a watermill symbol on it and that made me excited, mills are some of my favourite attractions with some of the most interesting people running them, so we parked up and cantered right on in.

Unfortunately The Mose (self-employed professional photographer that she is) hadn’t brought her camera with her. She was under the impression she was along just to see my parents off on their cruise, not to take the official photographs of today’s brown sign pursuits as well, which was clearly a big mistake. “When don’t I get in any car and www.followthebrownsigns.com?” I asked her, “Never is the answer, Mose, NEVER!”. She looked appropriately ashamed of herself so I decided to say no more about it. To make matters worse I’d left my phone at home and thus we had absolutely no means of taking any photos of what turned out to be a brilliant brown signed attraction. Fuming I was, absolutely fuming I tell you.

Trying to quell the massive frustration I was feeling for myself I got talking to John, one of only three employed millers at Eling Tide Mill who was very knowledgeable and enthusiastic about what he did. I’d never even heard of a tide mill before and because I love all things natural and harnessing of the elements it was brilliant to hear about how this particular mill worked.

This mill sits on an estuary on the edge of Southampton Water and is built on a dam across a tidal river. When the tide comes in it pushes open the one-way gates and fills up a millpond where the waterwheel sits. When the tide turns and starts to go out again the sea gates stay closed so the level in the millpond remains at the high tide level. When the tide has dropped to well below the waterwheel axle the sluice gate is raised and water from the millpond strikes the waterwheel, spinning it round which in turn starts turning the grindstone it is hooked up to, allowing milling to begin.

In this area of the world there is a natural phenomenon called “double high water” which means there are 4 high tides each day instead of the normal 2. This happens due to various complex reasons like earth tilt, moon positions and distances between land masses (explained fully here if you’re interested) but basically means that the millers can harness double the normal tidal power by being situated here. It is for this reason that Eling Tide Mill holds the Guinness World Record for the longest period of continuous milling of flour, set in 1984. Impressive.

There has been a mill on this site since before the Norman Conquest as it is mentioned in the Doomsday Book, how long before historians can only guess. What is known is the way this tide mill works hasn’t changed for over 900 years and I find that absolutely astonishing. We’d happened upon the mill at a good time because they were milling. Win! So John took us all around the noisy mill full of dangerously quick moving old cast iron bits of machinery telling us about the mechanics of the mill and his life as a miller. Harnessing the changing ebbs and flows of the tides might give these millers anti-social hours to work with but at least their power source is renewable and not likely to dry up any time soon. I like engineering and technology that works by using the natural world around us, it’s reliable and constant, and not surprisingly the next form of large scale renewable energy sources being looked at by the government at the moment taps into this age-old tidal power technology. Eling Tide Mill is one of only 4 other tide mills in the country (the others are in Essex, Suffolk and, interestingly, Bromley-by-Bow in East London) but is the only surviving tide mill in the world to harness the power of the tide for the production of wholemeal flour. It was abandoned in the 1940s but fully restored again in 1980 and now has a range of informative activities for children and adults alike to learn more about this historic and important mill.

Eling Tide Mill is definitely worth a visit if you’re ever down on Southampton Water or in the New Forest area, and with the rather odd but extremely good value admission prices (£3.05 per adult, £1.80 per child) it’s a cheap and fascinating day out (as long as you keep your hands from wandering into the quick moving bits of machinery, which might sound obvious but for some reason I found ridiculously tempting).