This week I had two days off work… Woooooooooohhhhhhhhh! Handily I got them next to each other so I could actually do something with my time off (washing my clothes and writing a book don’t count as “doing something” with my time off you understand). I’ll take any excuse to go down and visit my good pal Chris in Plymouth and as my parents were also holidaying in Teignmouth I made Devon my destination. So, as with all my post evening shift jaunts, I found myself setting off on a 4.5 hour drive at 11pm on Monday night down to the West Country. Predictably for me my chosen “quick” route (the A303) happened to be closed for night works after Stonehenge (which looks well creepy and cool in the moonlight just FYI). Not knowing the Somerset area that well, it being pitch black and 2am and all, I was more than a little bit miffed when diversion signs petered out after about a mile off the slip road leaving me massively confused and totally clueless about where I was supposed to be heading. Thus I drove around aimlessly for about an hour slowly losing the will to live and contemplating the prospect of sleeping in the car in a field when finally, by some happy miracle, I managed to get back on the 303 after a 30 mile detour, and put my foot on it (I think I even hit 60 miles an hour, not kidding). I made it into bed by a ridiculous 4.30am, and never have I been happier to crawl under a duvet in all of my life.

I won’t lie to you, despite my fun packed brown signing itinerary planned, Tuesday morning was spent wholly in bed, mostly sleeping and ignoring the prospect of getting a parking ticket. Frankly I was too tired to get up by 10am to put money in the meter, let alone drive around Devon visiting brown signed attractions. I was happy to part with the £25 luxury of not having to move from the bed that day, so I was pleasantly surprised when I finally peeked at my car through the blinds at 11.45 to find the windscreen ticketless. This is because Plymouth is NOT like London in any way people. What I absolutely love about that place is the way life is done with calm, ease and stresslessness. When you’re walking around Plymouth you can’t deny the feeling of carefree living, there are no argy bargy rush hours or pissed off people on the streets, instead everyone ambles over The Hoe with their dogs holding hands (the people, not the dogs), just taking life at the right pace with the sea air in their nostrils not worrying about parking fines, and I’m a big fan of that.

So Tuesday was a bit of a brown sign write off, instead I took up the invitation of lunch with my parents and devoured some of the biggest and most amazing seafood dishes I’ve ever seen in Nautilus in Teignmouth (I hadn’t eaten for some time by then) and went back to meet Chris from work to do some more laziness. Felt a bit bad for my lack of brown sign pursuits but laziness has to be done sometimes for the sake of one’s metal health if nothing else, let’s be honest. 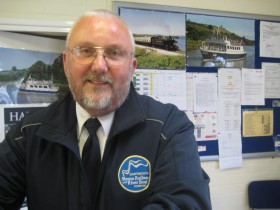 Wednesday though was a different matter, with my batteries fully recharged the prospect of doing some Devon exploring was exciting. I’d been told about a nice boat trip from Totnes to Dartmouth so I roped my parents into coming with me and met them in Totnes at the boat hut. No surprises though that by the time we arrived the only boat heading for Dartmouth that day had left. Woops, bad bad planning from me as ever. This man, Jim, though came to the rescue, he was an extremely helpful and knowledgeable man. He recommended we did a bit of a trip around the area, using a combination of transport mediums, including a bus, steam train, ferry and pleasure boat run by The Dartmouth Railway company. Regular readers will know that I bloody love steam trains but am less keen on boats (mainly because I tend to puke all over them), but as we’d be sailing up an estuary I crossed my fingers for calm waters, booked our multiple modes of transport and jumped right on a lovely clattery old bus to Paignton, here we are… 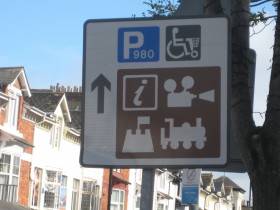 After a quick lunch in a tacky pub on the seafront (by following the brown sign to the beach) we picked our way back through more tack, in the form of cheap clothes shops, souvenir stands and mini golf courses and followed this sign to the station for the steam train leg of the journey. Steam trains always bring a bit of a lump to my throat, there’s just something so defiant and strong and impressive about them, and when they’re there standing steaming at the station platform, gleaming and fully restored by those most dedicated of volunteers, then chugging off pulling carriages of excited passengers and tooting their whistles on a sunny day it makes me very very happy. This track was one of the many at risk of being closed and abandoned during the late ’60s by British Railways who were ruthlessly deciding which lines were the most profitable to keep on and which routes would be closed due to lower margins. Thankfully this railway was taken on by a local enthusiast group who kept the line running and the much needed services going to this rural area. It was at this time that so many of our railways were culled,  making way for cars and roads to rule instead (which is a shame, cars and roads just aren’t romantic whichever way you look at them, but trains and train tracks really are – just think of The Railway Children for heaven’s sake. Romance really should win, but somehow it never does – story of my life, but the less we talk about that the better, moving on…). Here are some pictures of us on the train enjoying the gorgeous clickerty clack and the chugging noises of the steam engine running along the 150 year old train line built by Brunel himself along The English Riveria. I even risked hanging my uninsured phone out the window to take a video which apparently I’m not allowed to upload because it’s too big, sorry… 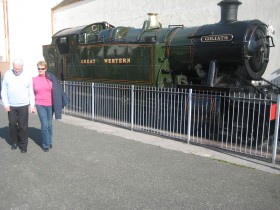 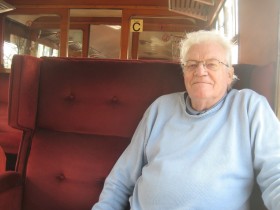 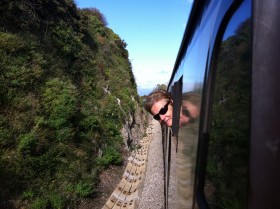 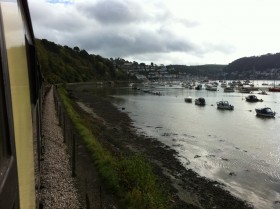 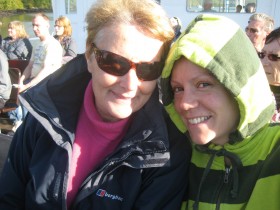 After the steam train trip we were dropped off at the ferry terminal to get across from Kingswear to Dartmouth and boarded another rather bigger cruiser vessel back up to Totnes. I sat outside on deck with my mum (my dad stayed well inside) who was poised with her hand ready to start rubbing my back as soon as we set off on open water, while I prepared myself for the usual hurling position; bent double over the side of the boat emitting deep, uncontrollable guttural groans that resemble the underground stirrings before a volcanic eruption, that (if the smell hadn’t already) would make even the most hardened un-seasick sailor wretch. Fortunately for the other passengers around me the waters were calm and I got to actually enjoy the boat trip. The commentary, which I thought would be embarrassingly bad and unfunny, was actually really informative and heart-felt. Various wildlife was pointed out (including buzzards, yay! And a seal which I missed, boo!) and unique local knowledge about the estuary was imparted. I love hearing about all the little but important things like flora and fauna, geography and business that characterise an area and shape the people who live there. The once busy and thriving fishing villages and boat building yards along The Dart no longer exist and income has shifted in recent years from dwindling trade in traditional industries to tourism and visitor cash. It sounds depressing but really with the ever more efficient advances in science and technology it can only mean that hard labour by people just can’t compete on costs. The fact that the place still thrives by adapting to a different market though is important, and the boom in visitor numbers on the steam train and cruises is easy to understand, there really is something magical about South Devon.

I absolutely loved my brown sign day getting around and exploring an area in far more exciting modes of transport than my crap car. Belting around all over the country gets tiring and its easy to forget that going at a slower pace and enjoying the journey is a very significant part of the adventure. Not having to navigate and negotiate millions of roads all day and really enjoy what was around me was novel and I felt about a billion times better for it. I heart the Dart Estuary, and all the brown signs that get you there (of course).