The Maharajah’s Well is, to say the least, a rather unexpected sight in a small village in the Chilterns. Its influences are clearly Indian, with its gilded dome and elephant sitting astride the well housing. Edward Anderdon Reade, the local squire at Ipsden, had worked with the Maharajah of Benares in India in the mid nineteenth century and had sunk a well in 1831 to aid the community in Azimgurgh. Reade left the area in 1860 but when the Maharajah decided on an endowment in England he recalled Mr Reade’s generosity in 1831 and also his stories of water deprivation in his home area of Ipsden. The Maharajah commissioned the well at Stoke Row and it was sunk in 1863. The originally intended site for the well was Nuffield Common. All work was completed by the Wallingford firm of R. J. and H. Wilder. 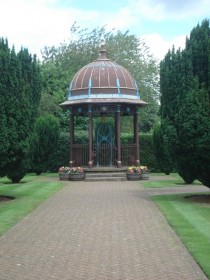