So the day to leave my student digs arrived. I took the chance to wash all my clothes and hung them out all over the banisters to dry like I used to many years ago in my own student house, then packed the damp smoke infused items back into my wardrobe/suitcase and into the boot. Unbelievably my car wasn’t broken into, despite being in an area that looked liked this… 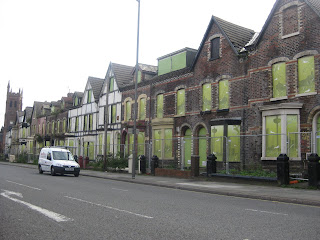 I was heading for Sale near Manchester and decided to take the non-motorway route, as it’s clearly going to be more scenic and I was more likely to see more brown signs on the smaller roads. Sadly though, because I can’t read a road map and drive at the same time, and because I seem to have absolutely no sense of direction or spatial awareness, I put on the sat nav and it took me straight onto the motorway. Brilliant. Thus getting out of Liverpool was quick and painless but unfortunately didn’t allow for a huge amount of random brown signs spotting. When I finally did get off the motorway though I was ecstatic to see this sign… 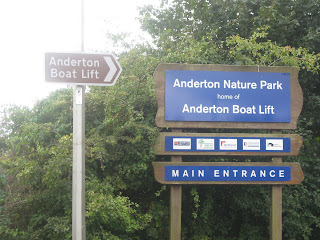 I had no idea what the hell a boat lift was, well I knew it was probably a contraption to lift boats (duh), but as ever, I wanted to know all the whos, whys, whens and wheres, so I went right on in. 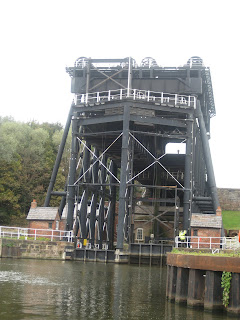 It turned out that this boat lift was built during the industrial revolution to get boats from the river Weaver up to the Trent and Mersey Canal above. The system was an ingenious one and the first of it’s kind, using hydraulic power to transport boats up and down to increase the distribution potential in the local salt mining industry and opened up various other trade routes which had been thwarted by a lack of access before. Engineers working on this boat lift are now world famous and include Rolls (of Rolls Royce) and Citroen (of Citroen, obviously). What I love is the determination and drive of the people who broke through boundaries and drove the industrial revolution, I have so much respect for the forward thinking genius ideas which were all poo pooed at the time but made impressive feats like this possible and are now all so taken for granted. 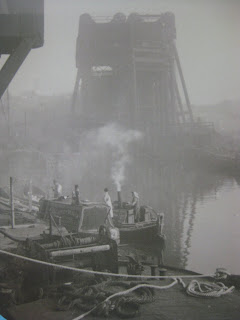 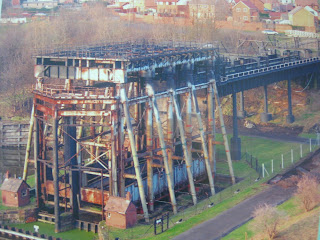 These very different pictures of the Anderton Boat Lift were taken first in it’s hay day during the industrial revolution in the late 1880s, and then one hundred years later during the 1980s when it was closed for 18 years due to corrosion caused by the salty waste from the salt mining factories upriver when it was declared structurally unsound, unfit for use and abandoned. I love stuff that’s a bit eery and weird (like the chunked up U-boat in Liverpool) and this picture of the abandoned boat lift makes me feel all scared and creeped out, so I really like it. It wasn’t enough to just look at the pictures or from the viewing platform though so I booked myself straight on a boat that takes down in the lift.
The trip turned out to be all a bit embarrassing. Usually on my random attraction visits there are only a few other geeks like me visiting these places and I don’t feel out of place on my own doing what I do, it helps that I make these trips in the middle of the day and during the week when most other normal people are at work so I don’t feel too much like an idiot while away from questioning eyes, but this particular attraction was apparently very popular and there were a lot of other people on it. Eeek, totally my worst thing. To make matters worse I was clearly the youngest visitor by about 38 years. Maybe it was for this reason that the skipper of the boat we were all going to be transported down the lift in directed his full commentary about the boat lift to me, and only me, throughout. Some of the old visitors even turned around and looked at me while he was talking it was so obvious. Being suspended 50 feet in the air between waterways in a canal boat made for a difficult if not impossible escape so I just had to deal with it and try to stop going red. 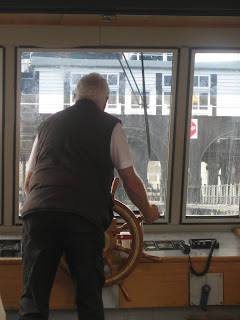 I would have liked to have spent more time at the brilliant visitor centre doing some interactive exhibits about how canal locks worked and seeing the way the hydraulic mechanism hoisted boats up and down between waterways. It also charts the really inspiring story of how the lift was saved from demolition by local enthusiast and engineering historians who could see that the loss of the Anderton Boat Lift meant this fascinating and ground breaking symbol of our world-leading industrial heritage would be accessibly only through photographs and strories, which over time would become lost and forgotten. As it was though I did as much skim reading as I could and grabbed armfuls of leaflets on the way out because when I’d parked an hour before in the attraction car park I hadn’t got any change for the car park and didn’t have any time before my boat trip to get any. As my luck with parking is pretty poor (getting massively extortionate parking tickets, contravening highway codes and being towed away outside pubs not infrequently) my priority was to speedily get my car out of that car park. Unbelievably I hadn’t got a ticket so I sped off as quick as I could in case a car park attendant was just about to lynch me, he wasn’t, I doubt they even had one. I did of course park up on a narrow bridge, making cars behind me wait, while I took pictures of the pretty canal as I left though. Renegade, I like living crazy. 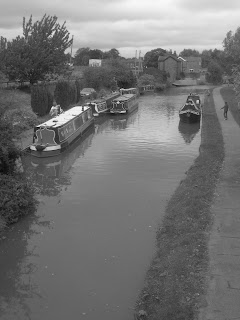 After the boat lift (which despite having a brown sign didn’t have a generic symbol, which is kind of the whole point of why I am touring around and seeing them) I decided I had to tick another symbol off the list. I tried Tatton Park, but on Mondays (like in China apparently) a lot of attractions are closed, another blind alley I ventured down was the Tabley House museum, no idea what it is because they wouldn’t let me in. More fool them.
Expecting that another museum or historic house would be my next stop I was relieved and ecstatic when I saw this sign… 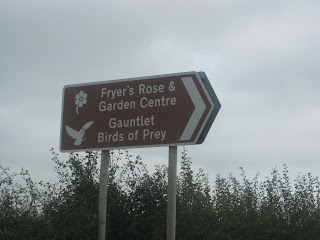 I love seeing these brown signs 1) because I love the brilliant owl swooping symbol and 2) because I love actual birds of prey. I really like their cunning natures, mainly, and the fact that they’re scary of course. I got there before the last flying display of the day, which is not usually my luck, so I had a look round and got squawked at by various birds. 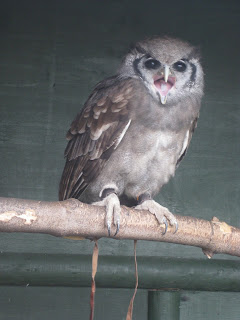 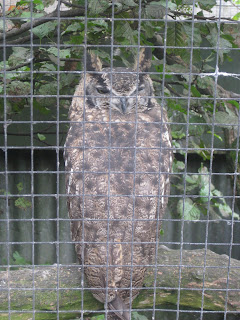 I had half an hour to kill so to try and steer away from my usual lunch diet of apples and gherkins I went to the garden centre next door where table service was provided to me and all the old diners around me (it was weird, I didn’t leave a tip).
The flying display was brilliant and to be honest I was expecting it to be pretty crap. Some places just fly the birds without much commentary or explanation about the birds but the guy who owns this centre loves his birds of prey. When he was setting up the centre he lived onsite in a caravan and hunted with Harris hawks and falcons for his dinner of rabbits and game. What a dude. 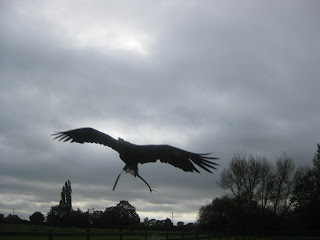 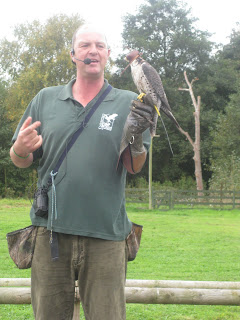 I was impressed that there was a white tailed sea eagle there (left) which was half the reason my sister and I went up to Scotland recently to spot them. We definitely saw massive birds of prey up there but their numbers are still so low that I can’t be sure that we did actually see one, so it was nice to see this gigantic bird flying around and nearly taking everyone’s faces off when it flew low over the crowd (well, the 4 of us). 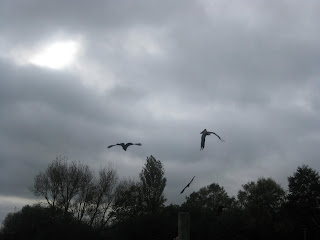 These are red kites, which are also a favourite of mine, there was a big reintroduction scheme in the late 1990s and Oxfordshire (where I used to live) is one of the places they thrived. Thus I spent many a happy (if dangerous) hour watching the circling red kites from the M40 on my way to and from London, oh those were good times…
So I left the bird of prey centre and headed for Sale where I met up with Eleri my travelling saleswoman and beater of loneliness. We are currently sitting in a rather strange hotel waiting for a funeral party to vacate the bar downstairs so we can go and have a drink, but to be honest it’s starting to sound quite fun down there, so maybe we won’t wait for them to go and join them. Unashamed funeral crashers we are.
Off to the Peaks tomorrow, where there are lots of caves and other such fun things. I’m also going to be staying in a single sex dorm in a hostel in the middle of nowhere until Thursday, which is sure to be interesting.
Wish me luck with the widower…
« Older blog
Newer blog »