Gosh, I never knew that!

The first ever ice skating club was founded in Edinburgh in 1743. Applicants to the elite club were required to demonstrate their ice skating prowess in a series of tests, one of which was to skate in a full circle on one foot, then again on the other foot, after which they must jump over one, then two and finally three hats all piled up on top of each other. What an ingenious test, and not easy either, especially considering hats were taller in those days!

A little bit of history

The long, cold winters of northern Europe inspired the invention of the ice skate, the earliest example is over 5000 years old and was found at the bottom of a Swiss lake (assumedly the chap wearing them rather overestimated their capabilities) and were fashioned from animal bone and leather straps. Early records indicate that ice skaters using poles to propel themselves across frozen lakes and rivers “as swiftly as birds” were a common sight in the colder climes across the North Sea. Consequently ice skating was positively old hat on the continent by the time Britons started getting excited about it in the mid 1600s when social trends and weather conditions moved the idea of ice skating from a bizarre activity done by foreigners to something positively hip. 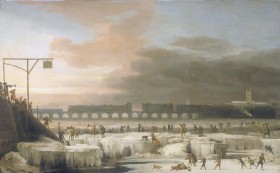 During the civil war (1642 – 1651) the Royal Family were exiled to Holland where they learned to ice skate. The future king, James II, developed quite a penchant for the sport and when the monarchy was reinstated he held numerous ice skating displays for the British aristocracy. Coincidentally at the same time the world was going through a “Little Ice Age” and the winters from 1600 to 1800 were so cold that the Thames frequently froze over. “Great Frost Fairs” were held on the frozen waters and ice skating was a big part of the festivities, so Londoners and Royals alike took the opportunity to skate, fuelling it’s appeal; in fact Queen Victoria got to know future husband Albert while out on ice skating trips.

Ice skating in Britain, although popular, remained an exclusively winter activity for another 200 years, until significant advances in science and industry made it possible to permanently freeze water and create an all season, all weather skating surface.  John Gamgee first employed his patented freezing techniques (originally invented to preserve meat for export to the British colonies of Australia and New Zealand) on a grand scale when he opened the world’s first “glaciariums” (a lot more romantic a name than “rink” I think, I might ice skate more often if I could say I was “popping down to the glaciarium”). In a tent just off the King’s Road in London he opened The London Glaciarium in 1876, shaped like Lake Lucerne with paintings of mountain scenery adorning the walls where Victorians could skate around to heart’s content, even in summer. Modern day ice rinks still use similar (but considerably more advanced) mechanical freezing methods to Gamgee’s, which overnight shot ice skating from a relatively rare, novel sport which was completely reliant on harsh winters into the all year round, easily accessible and popular sport we know today.

Here’s a great British Pathe clip from the 1940s on how to ice skate and look good on the ice, love it

What the experts say

“Across the UK, there are more than 135 clubs and rinks encouraging grassroots participation and supporting elite GB skaters. From Learn to Skate sessions to staging World level competitions, our British rinks are truly great. But that’s not where their important role starts and finishes. Ice rinks bring families together and offer a great place to spend quality time together, which is so important in today’s society. Many rinks offer family rates, special sessions or birthday parties specifically for families. Rinks also encourage exercise. For people of all ages, skating is a brilliant aerobic or anaerobic activity depending on the intensity and length of time you skate. Skating and ice dancing are low impact, helping to increase flexibility and endurance. Practising moves on ice helps build balance, power, extension, agility, and allows you to concentrate on improving certain skills. Group lessons provide social interaction in a fun atmosphere. As you progress through stages, rink sessions teach goal setting, patience, as well as discipline in working to achieve particular skills. In the winter months, ice rinks provide a place to keep active and embrace the cold weather! While in the warmer summer time, they are a haven to chill out and keep cool!” Keith Horton, Chief Executive, National Ice Skating Association (NISA), Nottingham

Organisations, official bodies and great links to places where you can find out more

NISA – The National Ice Skating Association’s official website, keep up to date on competitions, events and general all round ice skating information.