Mike Tyson takes us out with his mighty icy gloved blows…

My weekend should have been spent working. I have 3 big things coming up on Monday: an interview on BBC Radio Lincolnshire at 8.20am, a job interview at 11.10am and a big meeting about the legal/professional side of a huge complex project I’ve taken on to try and buy a huge old historic pub in Bromley (not just with my own money you understand it’ll be a collaborative thing) at 12pm. The problem is though that when I have a full day ahead of me without any meetings of proper commitments I have to attend I start thinking about all the places I haven’t been and the destinations I’ve wanted to visit for ages but haven’t quite got to yet. I basically see a work day as a play day (and therein lies my problem in life methinks, crashing on…). 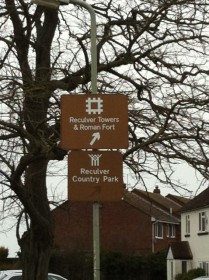 Of course I called my sister, The Mose, and hauled her from her similarly ignorable work as a photographer, jumped in my car and headed for Kent. Jo wanted to take some rugged seaside shots and I was more than happy to drive her to the sea, so we drove along the north coast of Kent for a bit until we saw this brown sign for Reculver (now that is an old school brown sign if I ever I saw one, one from the original 1980s pilot maybe? I’ll do some research…). 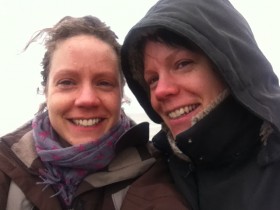 The Mose proposed the motion that we sit in the car and look at the old fort ruin of Reculver on the horizon and read about its history on my iPhone, “but where’s the fun in that?!” I bellowed… some people. She wept quietly while I kicked her as hard as I could out of the passenger seat but instead of heading for the ruin she ran in the opposite direction and straight into the inviting looking Reculver Visitor Centre instead.

That girl doesn’t necessarily embrace the way of a true brown-signer but she certainly knows a warm looking building when she sees one, so I bowed to her probably saner judgement and followed her in. We were warmly greeted by Colin and Eleanor from the Kent Wildlife Trust who run this modern fully sustainable building and looked around, exhibits included exploration into the seaside environment and a fantastic photo exhibition around Reculver. After a big renovation this building now has a strong focus on renewable energy and is heated by a log burning stove and solar panels, it is clad in chesnut for insulation and recycles rainwater for use throughout the building too. Its opening in 2009 marked the end of the construction of the Kentish Flats wind farm, which is easily visible 5 miles offshore. I’m a big fan of renewable energy and especially windmills so I loved the aspect window which looked right out on the 30 turbines out at sea. Creepy creepy cool. 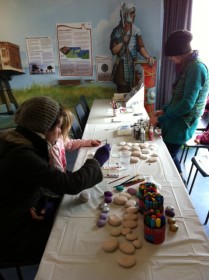 As well as the windmills the thing that really got me excited was a long table covered in paints, pens, brushes and pebbles. This pebble painting exercise was not just to provide something fun and creative for visitors to engage in it was also a big art project. All the painted pebbles will be making up a big piece of modern art which will go on display in the summer outside the visitor centre (when of course I will be going back to see our contributions in all their glories). I absolutely love this kind of thing so I got stuck in. A great effort of mine I think you’ll agree? 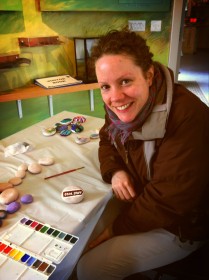 The artist running the activity made all her art from locally sourced beachcombed material and had a whole array of great projects going on, from massive crisp packeted turtles to driftwood boats, it was recycling for the creation of art which added a very evocative element to her work. She loved running projects that encouraged people to get creative and wanted everyone to contribute their own unique pebble to her art piece. Having things like this going on at visitor centres really helps engage people with where they are, it makes you think about your surroundings and inspires you to think beyond the here and now. 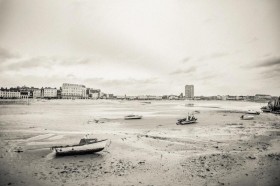 When we finished our pebbles we said our goodbyes and ran back to the car trying to avoid Tyson’s icy gloves. Our next destination was Margate, for no particular reason other than there would definitely be fish and chips there. The Mose took the photos she’s been hankering for and we shared our fish in chips in the car, it was virtually impossible to open the doors without having them ripped off in the gale anyway so The Mose got her way this time. 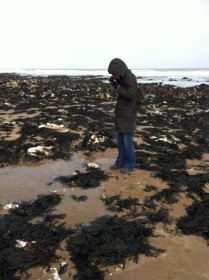 After Margate we drove along the coast to the gorgeous little cove of Dumpton Gap, near Broadstairs where we used to go as children with my grand parents. I kicked The Mose out of the car once more and we forced ourselves down to the shore, battling the icy wind to walk along the crumbling rock faces and trying to avoid the roaring tide while tripping into rock pools and getting tangled in seaweed because we could hardly see for our incessant streaming tears. I let Jo take this photo then finally had to admit defeat to the weather.

Despite the face splitting bitterness, how can one not be pleased with a day spent watching windmills, painting a pebble, eating fish, laughing with your sister and inhaling sea air deep into your city-fume-clogged lungs? Ahhh the seaside, can’t wait to see you again in the summer…