Fishing villages and a little museum in Dublin

Last weekend I muscled in on my best friend’s weekend away in Dublin. She was attending the Christening of a child I’d never met and I was, well, chomping at the bit to do some Irish brown-signing and frankly happy with any excuse to go away, even if it did mean jumping on other people’s bandwagons and attending lively Irish christenings of children I’m not even a little bit connected with.

I’d learnt that Dublin was slowly phasing out its brown tourist signs when I called the Dublin Tourist Office while researching the city for my brown sign Olympic torch relay, but there are still some across the city, so I wouldn’t be disappointed I was told. I was most excited about visiting the Chester Beatty Library which was my “featured brown sign of the day” a few months ago.

So my best friend and I caught a very early flight from Stansted, after an initial spanner being thrown in the proverbial works by me when I realised I hadn’t remembered to print out my boarding pass. If you’re flying Ryanair this error results in a fine roughly 8 times the cost of your flight so we turned around and I had to battle with printers and slow connections at 5am while my best pal stood visibly writhing with anxiety and cursing me loudly under her breath. Luckily for me though my best friend is also highly neurotic when it comes to time planning and had insisted we leave well over an hour before I would have done to get our 8am flight (probably to account for inevitable disasters that follow me everywhere I go), and in the end we made our flight, even in time for an obligatory airport lounge coffee too. Bonus.

The first brown signed destination of the weekend wasn’t actually in the city, it was the lovely little fishing village north of Dublin called Howth. 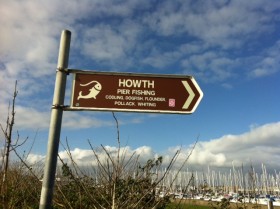 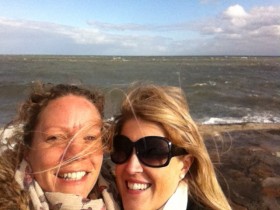 The words to best describe our morning there would be “windswept”, “rugged” and “bracing”. We walked up to the little lighthouse and up and down the seashore until we could take sea spray on our faces and feel our feet no more – both great excuses for an enormous fish pie in a traditional Irish pub we found… Dublin is absolutely packed full of museums, galleries and things to do, so of course I fitted as much of it in to my weekend as possible. I visited the fantastic Chester Beatty Library which I knew I’d love before I’d even walked in the door and revelled in all the engaging elements to each exhibition that I so herald on the blog, this “creative corner” was just of one of them. The collection that the “King of Copper” Sir Chester Beatty built up over his lifetime is absolutely astonishing. He was a rich and well travelled man and that for him meant filling his pockets with expensive, sometimes even priceless, souvenirs everywhere he went. The vast majority of the collection was from in Asia and included early religious manuscripts, emperors garments, doors, jewellery, painting galore and millions of other artefacts that caught this savy collectors eye.

After Chester Beatty we explored the city on foot and happened upon what turned out to be an absolute joy of a museum. It wasn’t in the guidebooks because its new kid on the block, just 1 year old, called the Little Museum of Dublin. I got talking to the guys on the desk and loved their attitude and passion for the place immediately. The museum is actually a house which has been covered completely, literally wall to wall, in everything Dublin from posters, photos, letters, jewellery, statues, bicycles, old pub signs, clocks, maps and furniture. All the pieces were donated by Dubliners and the desire to share their history with the world proved very strong with them, the museum still gets a huge number of people coming in and adding to their collection. 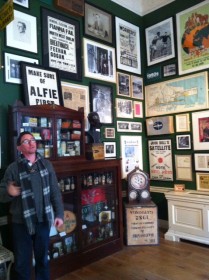 My tour guide of the day was Kieran who hopped upstairs as soon as there were 3 visitors pootling about who he could do an impromptu tour for. He used to be a stand up comedian which added an unsurprisingly witty element to his talk. He took us around both rooms picking pieces and talking about them and their significance in the history of Dublin. A whole host of different things had been collected, including the makeshift lectern that John F Kennedy used to address the Irish Parliament less than a month before he was assassinated – a borrowed music stand form a little music shop.

The exhibits to talk about were endless and by the end of the tour you felt like you were a little bit of Dublin yourself, making it’s history with your presence. It was brilliant, and new so if you’re off to Dublin any time soon I highly recommend you pop in 🙂