At the ferry terminal yesterday, after a too-enormous-for-any-normal-person-to-consume-without-having-an-immediate-5-minute-wee-afterwards latte, I was on my way back from the toilet and noticed the best seller shelf in W H Smiths. I popped in to have a mooch and delay my return to the half dried coffee spills and yesterday’s discarded blueberry muffin that characterised our seating area.

At number 6 was a book called “Crap Days Out”. I’d never heard of it before but its clearly doing well enough to get to the heady heights of the top ten in the literary count down. Books like this make me uneasy though if I’m honest, I know it’s all a little bit hammed up having titles with “crap” in them and they do grab attention, but it always makes me sad to revel in the negative of things, especially in a subject that is very close to my heart. 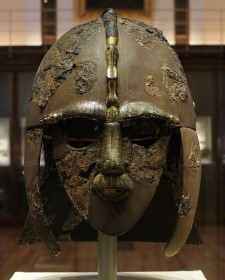 The book basically does exactly what you’d expect it to do, it lists attractions and things to see and do around Britain then deems them crap. The End. I didn’t read it all obviously (even people who buy it don’t read it all surely? What’s the point?) but an example that stood out to me was Sutton Hoo, in one sentence it was summed up thus: “All the stuff that was found here is 200 miles away in the British Museum”. After reading that I went from having a shrugging indifference to the book to downright annoyance. The findings at Sutton Hoo were extraordinary and rank among the greatest archaeological discoveries of all time. The unbelievably well preserved long boat of an Anglo-Saxon king which sailed from Scandinavia over 1000 years ago to these fair isles and later served as a burial chamber full of his treasures is something I think is amazing and fascinating, not “crap” in any way. The iconic helmet of said king (left) is the something we can all be proud to say was found on British soil, no?

It is true of course that all the “stuff” found here was moved to the British Museum (where they also have boring but important things that archaeological finds need to survive like security, preservation experts and historians etc.), but what the author seems to totally disregard are all the great things that can be found there. This National Trust owned site is one of the most interactive and interesting I’ve ever been to, an important element of a visit here is having the imagination to appreciate this place and really think about the findings and their meaning in our great British history, but then I’m guessing the author hasn’t even been here, or if he has he felt it necessary to ignore it all so he could include it in his “crap” book.

I don’t like lambasting other people, especially people who write books because it’s hard, but for me, books like this totally feed this enormous apathy for being part of all the great things that are going on all over Britain, run by dedicated and interesting people who want to share what they do with us, to enrich our lives and inspire interest and engagement. It also makes me sad that it’s easier to sell books that say everything is shit than the ones that celebrate the amazing coolness that is everywhere all around us.

OK, enough on Crap Days Out now, even writing about it is boring. Moral of the story: Don’t bother with it, or indeed any other literature that purports to tell you best places to go and not to go – don’t listen to anyone else’s opinion for heaven’s sake, get out there and do the discovering all for yourself – follow the brown signs and make your own adventure 🙂