The Brown Sign Torch Relay Day 12: You just keep on pushing my ball over the borderline 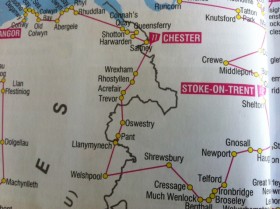 The Olympic torch is being carried back into Wales from Chester today as it heads to Stoke-on-Trent taking a very long way round. A closer look at the map shows me that it doesn’t cross the border just once though, as far as I can work out it crosses back and forth 4 times today and you won’t be surprised to hear that I find this exciting. When I was travelling I was intrigued by the borders between countries, it’s one of the reasons I travelled overland the whole time so that I got to physically walk over to another country rather than fly over and arrive in an airport that could be anywhere, without seeing the change in terrain, people, language and culture for myself. When 2 landlocked countries have a border I like to go and hang there for a bit, they’re what guidebooks describe as “melting pot” towns and I really like seeing how the dynamics of that actually work in real life (except maybe when you hang on the border between Thailand and Malaysia and get shot at… but that’s a whole other story).

One of the places where the torch passes over from England to Wales is at Llanymynech so I zoomed right in on that border town and banged it into straight into Wikipedia to investigate further. This town does have an interesting border related history as well as a rich industrial past which includes canals, mines, quarrying and railways (all of which I love), it’s not surprising really, we are right near the birthplace of the industrial revolution, Ironbridge, afterall. The border runs pretty much straight through the high street at Llanymynech and used to pass through The Lion pub (now sadly closed down) which had 2 bars technically in England and 1 bar technically in Wales. During the time when Welsh counties were classed as either “wet” or “dry” depending on whether the council made it legal to serve alcohol on Sundays, you could only get legally served on the English side of the pub but not the Welsh one on a Sunday until 1969 when Montgomeryshire was declared “wet”.

Apart from the industrial heritage related attractions in Llanymynech (which include a huge creepy 19th century lime kiln you can actually walk around in) one area on the map stood out, and that was a splodge of green just above the town. On further investigation the green splodge turns out to be Llanymynech Golf Course and to my great delight the English/Welsh border cuts right through it, see?! 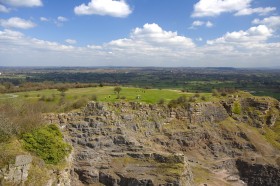 This golf course holds the accolade of being the only golf course in Europe with dual nationality where “on the 4th hole you tee off in Wales and putt out in England. The 5th and 6th hole remain in England before you are cordially welcomed back into Wales on the 7th tee”. But not only is the golf course appealing for it’s mixed race heritage, it also sits atop a Roman hill fort, giving your golf playing experience an even quirkier, if slightly more vertiginous, edge. And if any of that isn’t enough for you then get this, only Ian bloody Woosnam learnt to play golf here, cool huh?! Now that, my friends, is a claim to fame. I’m excited, now hand me a pink V-neck and a bat… I’m going golfing.