Brown signing in the Philippines

So this is me a few weeks ago standing under a brown sign in Vigan, Philippines, after worrying (actually worrying) that my travels this year wouldn’t take me by any brown signed attractions.

One of my big things about brown signs is that they don’t just exist in Britain and Europe but are also scattered around the world sitting quietly, bearing their directions to so many different and cool places, just waiting for everyone to notice and follow them. I always talk about how I love the huge diversity of places with brown signs but when you bring in the global element to brown signing things get pretty bloody interesting my friends…

Vigan was listed by UNESCO as a world heritage site in 1999 due to it’s rich 500 year old trading history and it’s surprisingly well preserved European colonial buildings. The town gained significance during the 16th Century when Spanish colonisers made Vigan their capital on the northern most island Luzon. The city is situated just off the coast of the South China Sea on a natural river delta which allowed sea faring ships to weigh anchor offshore and smaller vessels to run cargo between the ships and land. The city soon became a melting pot of people, languages and cultures where trade between Asia and Europe boomed.

The new inhabitants of Vigan built houses that evolved from from the traditional wood and bamboo Philippine dwellings with a twist of European influence and stuffed them full of all new mod cons of the time (ceiling mounted room fans pulled by a servant for example) and were built in wood and brick. The result were elegant, majestic houses with window shutters inlaid with mother of pearl, thick hard wood floors throughout and ornate staircases leading up into spacious curtain-billowing rooms. I loved the architecture here, and not just because it was old (I can’t help but love old stuff, even if it looks crap I’ll still love it if there’s a “circa 1837” underneath it). There’s something so inviting and intriguing about these houses and the people who lived in them, people who moved half way around the world to do business in this exotic trading post on one of the far flung islands of the Philippines. Here are some of my pictures of the houses… 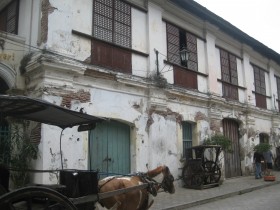 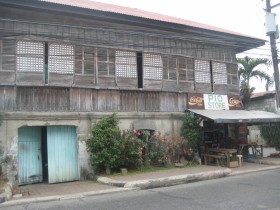 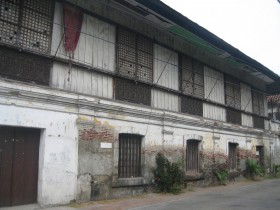 The best way to get around in Vigan is to hop on one of the plentiful horse and carriages plying the streets which trot you around the sites and dodge speeding tricycles with aplomb. The carriages nowadays just take tourists around the city but they used to be the only taxi service before smoke belching jeepneys and trics took over. Of course I grabbed the opportunity to jump into one of these ancient old carriages straight away, hoping to get a unique and pleasant experience of Vigan. Unfortunately though, just as we’d sat back and settled ourselves for the trip we heard a big clattering of hooves and carnage unfolding behind us. Looking back we saw a collapsed horse on the cobblestones which I was totally convinced was dead. My travelling companion Chris tried to placate me while I hid from the hideousness with my face planted firmly in his armpit and reported the horse was being helped up and seemed to be “right as rain” again in seconds (he was definitely lying to make me feel better I know it). Horse and carriage might be the only way to travel in Vigan but it’s probably a good idea to keep the horses fed and watered to ensure it stays that way guys, just a suggestion.

The brown sign in my photo points to a few of the many churches found all over the country. Unlike it’s neighbours the Philippines is a predominately Catholic country, so instead of the typical South East Asian scenes of temples and monks dotting around, I came back with pictures of gorgeous thick walled churches made from coral and stone (built in the “earthquake” architectural design with the bell tower set away from the church in case of collapse during an earthquake) and gregarious colourful shrines dedicated to the Virgin Mary. Despite my eagerness to visit the churches on the brown sign sadly I was ill attired for the occasion (note my short shorts) so found myself looking in longingly from a distance instead (I donned some longer trousers and visited plenty more though so not to worry).

Have you spotted any brown signs in any far off destinations? Or even been surprised by one you found right on your doorstep? Either way you can add them all to the massively growing map of brown signed attractions here and help play a part in my brown sign project 😉 Big thanks to all those who are nominating and helping add more destinations all the time.