On bikinis and windmills

In a week I will be jetting off (on a terribly-badly-reviewed-and-cheap-for-a-reason-yes-we’re-all-almost-certainly-going-to-die airline) to Singapore and The Philippines. The trip is something I’ve been thinking about for a long time. After years of working on my brown signs project I decided when my website was finally working and ticking over nicely I’d have a break for a month or so doing something I love but haven’t had the chance to do for ages, basically a big pat on the back through the medium of travel.

So this morning, after preparing for the trip in various ways (mainly by shopping online for bikinis and hot pants) and thinking about what the trip ahead had in store for me, I thought I’d check my follow the brown signs email in case I needed to do anything on the project before I left. To my joy I found an email waiting for me from Michael Hardy, the Honorary Secretary of the Lacey Green Windmill Restoration Society, asking if his Windmill qualifies for submission to my website. It turns out the windmill does have brown signs but (like many mills across the country) as it is only open to visitors on certain days of the year (25 days to be precise) the signs (ingeniously) fold up when the windmill is closed. I emailed him straight back and said he definitely qualifies and looked forward to receiving his nomination.

Of course I did a search for Lacey Green Windmill straight away (regular readers know how much I bloody love windmills) but only managed to get halfway down the home page before I started welling up (regular readers also know how emotional not only windmills but also passionate people make me. More often than you might think this project of mine makes me burst out crying while I sit here on my own in my dining room, reading about fascinating and dedicated people who do brilliant things, while emailing The Mose (and now my poor boyfriend) links to everything that makes me weep. I am a loon, I know). 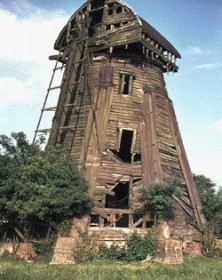 The first of the tear jerkers was this evocative image of the windmill in 1970 when this 300 year old gorgeous and important piece of history found itself in such a terrible state of disrepair it looks almost too dilapidated to save. The picture tells the same story as so many other redundant pieces of our industrial past all across Britain that were just abandoned when people simply didn’t know what else to do with them. It’s not surprising really; after the industrial revolution when the huge potential of steam power was being realised the owners of these mills were faced with the dilemma of maintaining large and costly buildings which no longer provided the most effective production and manufacturing methods which were quickly being surpassed by cheaper, faster and more efficient ways of milling, making them no longer economical to run (and hey, what’s the point in it if it’s not a money maker, eh?!).

There’s just something so eerie and compelling about a picture like this. I half want to run up to that decaying old windmill and put my arms around it and half want to run away and cower behind a tree, peeping out at it occasionally when I can muster the courage to look at it. Luckily for us there was one man who wholeheartedly wanted to run up and hug it, and he was called Christopher Wallis (cue second bout of lower lip wobble). This man was not just saddened by the state the windmill had been allowed to get in, he also knew that if the windmill wasn’t saved a piece of important local history would be completely forgotten and totally unappreciated by the generations to come. The best way to educate and inspire people is to give them hands on, real experiences of things, and there’s nothing quite like standing in a windmill while the sails are turning majestically outside which is making the millstones grind and showering actual flour into a hopper in front of you. It’s the only way (without a hell of a lot of imagination) to really understand a way of life we no longer have but quite literally paved the way for the lives we lead today.

Determined to save the windmill, Mr Wallis set about the mammoth task of restoring the mill and in 1971, with the help of as many volunteers as he could rope in, he began the awesome project of bringing the windmill back to it’s former glory. The building had sunk and twisted over all those years and the restoration had to be done delicately and with huge planning. The amazing pictures of the stages of restoration are here and it really shows what a painstaking and difficult job it was, Mr Wallis even devised a way to right the windmill using a series of pulleys so that much of the original structure still remains. 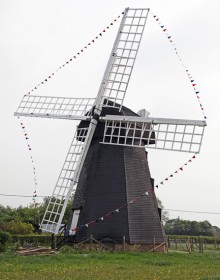 And here’s a picture of the windmill “dressed” for the royal wedding last year. Isn’t it spectacular? I think so. Thanks to the thousands and thousands of hours of work put in to save the windmill now everyone can appreciate something that is beautiful, important and even more amazing for it’s life story. It makes me proud to see this mill standing tall and continuing to play it’s part in our rich British heritage, even if that isn’t milling flour anymore. It’s role has changed but it is just as meaningful, and as with very surviving windmill in Britain, there are a small number of insightful individuals behind it who battled hard to save these pieces of our past. It’s always easy to go with the easy option and ignore a decaying old building and not put the thought, time, effort or money in to save them, but they are all treasures and they all tell their own unique stories… and don’t I absolutely love hearing them.