On glamping, heartache and doing the hard bits

After quite a lot of research around camping and caravanning sites recently as part of my brown sign discovery of Britain I started reading more and more about “glamping” (or “glamourous camping” where “glampers” get things like hot running water and solid structures to sleep in but still have a holiday in a field), so I decided to write a blog on the subject. But it was a blog I was not going to finish; for 2 reasons: 1) I hadn’t completed it by the time I had to leave for work and 2) I wasn’t really feeling it enough to keep going when I got back. When I re-read the piece I realised (to my horror) that what I’d written sounded terribly like some travel supplement columnist doing the thing I hate the most, basically dissing stuff that other people do and implying the way the writer does things should be the way everyone does them. My post made me sound like I was knocking glamping, which I really didn’t mean to do. I’m always a big fan of people getting out there, doing fun things and experiencing the world – I don’t care whether they camp, glamp or whatever, but the point I wanted to make was that, for me, the very things that attract a lot of people to glamping, i.e. camping without the hard bits, is the very thing that puts me off it. I think the difficult bits are exactly the things that make experiences so darn good. My piece clearly wasn’t getting my point across so I thought I’d probably just abandon the draft, until that is I had a conversation about my thoughts on glamping down the pub with my very favourite ex-boyfriend.

Chris and I started going out at uni and were together for a really long time. We travelled around the world, lived in loads of different places and did our lives very tightly together for nearly 10 years, sadly though we broke up 3 and half years ago. Without boring you dear reader with the tales of heartache and hideous hideous pain let’s just say it’s been an emotional rocky road but we’re now at a happy stage where we can go out for a drink and I can ask whether he has a girlfriend without wanting to kill myself when I hear the answer.

So we were reminiscing about things we’d done and places we’d been and got to talking about China. We spent nearly a year travelling around Asia completely overland, getting the train from London through Europe to Russia on into Mongolia and China, then scooted around South East Asia and Japan getting an assortment of buses, trains, boats, rickshaws, motorbikes and wagons pulled by water buffalo. We were in China and Tibet for 4 months and those countries are not easy places to travel in. Just a few of the difficulties included getting 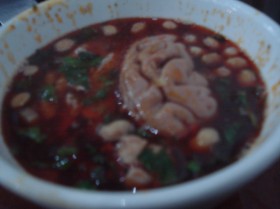 dog and brains for dinner (not joking, see photo for evidence) and a mullet at the hairdressers because they’ve never even seen, let alone cut, a barnet of curly hair before (and I’m NOT attaching a photo of that let me tell you). The trains are packed out, they take ages to get anywhere because China is so massive and at 6am every morning the Chinese national anthem gets blasted into your cabin. Going to the toilet in a public loo usually involves squatting over a trough of sewage opposite a woman a meter away who unblinkingly stares at you as you wee, while you try not to get overcome by the stench and hold back back the virtually uncontrollable urge to both vomit and cry (sounds like I’m exaggerating but believe me people, I am not). It took a lot of getting used to and many of these things never got easier (the toilet smell for starters) and I just about struggled through some of those times, feeling homesick, tired and jaded, often asking myself why on earth I was doing it, but as with all of these things in life obviously I wouldn’t change my travelling experiences for all the world.

So in the pub when Chris and I were talking about the hardness of China we were also laughing (alot) and found ourselves recalling the really significant meaningful times that made the trip so brilliant. The thing about doing hard stuff, and more importantly keeping going when all you really want to do is give up, is that it totally makes you appreciate when times are good and makes you properly feel life’s little pleasures. If you don’t go through the downs then the ups just aren’t really ups are they? They’re just a flat boring constant; it’s no wonder so many of us in the western world are prone to feeling dissatisfied and unfulfilled when we live every day with such opportunity and high standards of living. It’s got to a point now where all our luxuries are just satisfactory, not brilliant or amazing, but just satisfactory. Things we take for granted like hot showers, drinking water from the tap, clean sheets and non-embarrassing haircuts are no real shakes unless you’ve lived without them, and then when you experience them again your joy is immeasurable, and that happy happy feeling is something I’m a very big fan of. My point about glamping was not that it’s wrong in any way, but more that it’s really important, and so easy to forget, that the unfortunate side-effect of avoiding life’s hard bits all the time also massively reduces our appreciation of the small but unbelievably significant good bits.

Just as a footnote, psychologists have said that “ear worms” (those songs that get stuck going round and round in your head) are often your subconscious thoughts and feelings coming out in a song that sums them up. My ear worm, appropriately, is a 1990s belter, James’ Sit Down… “Oh, if I hadn’t seen such riches I could live with being poor…” Enjoy 🙂