My week of marriages and death

This week has been full of weddings and funerals for me, quite literally FULL. I’ve attended 3 weddings and 1 funeral in 3 different countries in the space of 7 days. I feel (but hopefully don’t look very much like) Hugh Grant. These life and death celebrations have taken me far and wide and (you know me) of course I’ve been screeching to dangerous halts in the road to take pictures of the brown signs I see.

So last Saturday it all started in Herefordshire in the intriguingly named little village of Much Marcle for my friend Lisa’s wedding. Much Marcle was mentioned in the Doomsday Book and is full of history and aching with quaintness, but to be honest I didn’t get to see much of it because I was mainly playing croquet and watching my friends get married (sometimes you have to stop being obsessed with brown signs to do normal things, I’m told). The day after though on the way back to London for work (God I really need to give that shit up) I happened upon this sign.

As Herefordshire is well known for it’s cider and perry (like cider but made with pears) I was hoping I’d see one of these cider farm brown signs 1) because they’re not very common and 2) the actual cider-cup-with-apple symbol only started appearing on signs in 2004, so it’s one of the new additions to the Brown Sign Game. I didn’t have time to visit Oliver’s Cider but am reliably informed by their website that they produce award winning cider and perry “crafted in small batches using fresh (mostly hand picked) unsprayed fruit with minimal intervention, distinctively presented, respecting the great heritage and traditions of the past but with an eye to innovating for the future”. I’m a big fan. 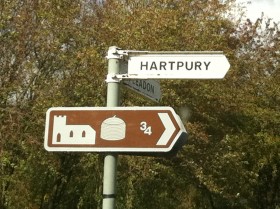 The next brown sign was a unique one (WOOO WOOOOHHHHH!) and looked like a large bee hive, the text said “bee shelter“. Of course I was immediately interested and had to turn off the road and discover it. It turned out to be a free standing ornate stone structure built in the 1850s to house bees and straw for the bees to live in and was a the predecessor to the modern bee hive. These old time bee shelters are technically called “bee boles” and used to be common all over Britain, especially in country house estates, especially before the widely 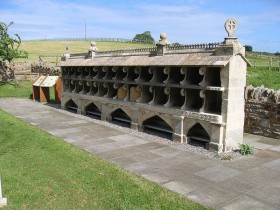 available commodity we take so much for granted, sugar. Now of course, as with so many redundant pieces of our agricultural and industrial heritage, most have been abandoned or destroyed. This bee bole though was “rediscovered” in the 1950s quietly sitting in the local police station garden by the International Bee Research Association and was immediately listed. Finally, after much movement and restoration the bee shelter rests in peace in the Hartpury churchyard for visitors to enjoy and appreciate. Pretty impressive huh? I think so. 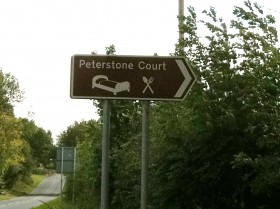 This brown sign is pointing the way to Peterstone Court near Brecon, Wales, the venue for the wake after my great aunt Mitzi’s funeral. This lady was a character, and I’m not just saying that because she’s dead. Throughout her life she lived absolutely as she wanted, she took no prisoners and suffered fools badly. She was kind because it was part of her, not because she made herself be. She spoke her mind, said it how it was and expected you to do the same, she wasn’t offended easily and cared little for beating around the bush, and I have a lot of respect for all of the above. On receiving a bunch of flowers from my mum after returning home from hospital one evening she called to thank her, not for the flowers but for the thought and effort my mum had made. She said “Thank you so much darling for thinking of me, when I read the card I was touched, but where on earth did you get the flowers from? They were truly hideous so I put them straight in the bin”. RIP Mrs Mitzi Brandt. 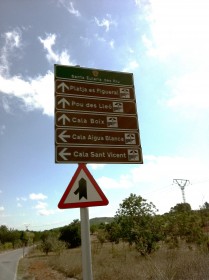 The next sign along the way is not your “normal” brown sign as you can see, and that’s because it’s Spanish! Yay! The next stop on my list of weddings and funerals was the sun drenched party island of the Mediterranean, Ibiza, for my friend Laura’s wedding. After a lot of late finishes at work and early starts to make all these events I was very happy to have some time away. It wasn’t however very relaxing because on free days I didn’t lie around reading in the sun like most people. Instead I cajoled (read: bullied) my friends into hiring a car (which made us look like we’d been shot straight into an episode of the In-Betweeners) and cained it around the island going brown-signing. We visited brilliant churches, lighthouses and beaches, all by following the brown signs, none of which we would have even thought of seeing in these often secluded little places had they not been helpfully brown-signed off the road for us. 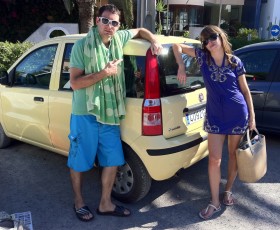 We acted like idiots throwing each other into the sea and generally enjoyed the brown-signing experience. I also have 2 more brown-signing converts in Anna and Nick. Well done guys, loving your dedication.

My plan was to visit at least one brown signed attraction in Cambridge, my last stop on my week of marriages and death, where I was helping my sister shoot a wedding. However, while sitting in a coffee shop just down the road from the Debating Society (the actual wedding venue, and amazing it was too) pretending to do a bit of Cambridge research, I saw a tweet from Andrew of Saturday morning BBC 6 Music breakfast show fame asking for geek nominations for their regular slot “Geek of the Week”. Too geeky an opportunity to miss I emailed in and found myself half an hour later having a good old chat about my project and the website to Josie and Andrew on air. The link to iPlayer where you can listen again is here, just skip to 1 hour and 21 minutes in and there I am, proudly wearing the title of Geek of the Week. Damn I’m cool. Thus there are no brown signing photos of Cambridge, although there are a lot of the lovely couple Caragh and Mike (and they’re big brown-signing fans too, you rock on guys).