Bad bikes and the oldest operating aquarium in the world

This week I had the honour of writing a piece about my new website (www.followthebrownsigns.com) for The British and Irish Association for Zoos and Aquariums (BIAZA) newsletter. I hope the piece will get more attractions signing up to the site (for free) and help get as many zoos and aquariums on the brown sign map as possible. It motivated me to do a little research into the subject and when I read that Brighton Sealife Centre is in fact the oldest operating aquarium in the world I decided it needed a visit. So The Mose and I donned our flip flops and headed for the seafront, a mere 63 miles away.

I happen to know the exact distance because in 2006, on the hottest day of the year, with a significant hangover and on a bike manufactured in around 1989, I cycled all the way from London to Brighton. None of my mates wanted to sign up with me to the charity bike ride when I started making noises about wanting to do it. My boyfriend thought I’d chicken out when it transpired that I’d have to do it alone, but never one to have other people’s decisions dictate my life, I stuck to my guns and applied. A few months later therefore I found myself climbing gingerly onto my borrowed bike at the start line on Clapham Common at 7.30am on a June Sunday morning, watched by similarly hungover friends, with just a Snickers bar and a bottle of Buxton strapped to my bike wondering why in God’s name I continually feel the need to do these ridiculous things. Needless to say the ride didn’t go well, I hadn’t trained (obviously) and it was so hot I just couldn’t drink enough (thank the Lord for the people who lined the route with cups of water which I could desperately grab and half pour down my parched throat, half down my face – they saved me from certain death by dehydration I’m sure of it). 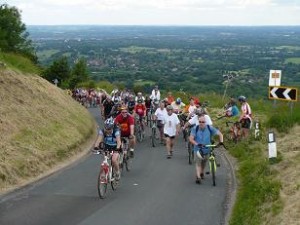 At the end of the route there’s a notoriously steep hill called Ditchling Beacon, it climbs up and up and around for what seems like a lifetime until suddenly you’re at the top on the South Downs with gorgeous views all around and the joy of knowing there’s a pretty much downhill freewheel to the finish. It was here, after about 60 miles of pain and numerous calls to my boyfriend (mostly begging him to drive to where I was so I could throw my best friend’s brother’s old bike in a hedge, jump in the car, speed off home, have a bath and pretend none of this hideousness ever happened) that I heard a voice that made me weep. I was struggling up the hill (pushing my bike, obviously) wondering when it was all going to end when I heard someone shouting through a megaphone. That lovely lady was calling words of much needed encouragement to us poor souls but what was brilliant about her was that she just did not stop. Whenever a new bedraggled cyclist came struggling into view she would cheer massively and I’ll always remember her words that got me to the top “come on guys, if you can hear my voice you’re nearly there! We have tea and cakes up here, if you can hear me you’ve nearly done it, you’re so close!” And I don’t even like cake, it was the encouragement and belief in her voice and her determination that we would all get up there that inspired me to keep going. Even now whenever I go and watch sporting events I’m always the one shouting encouragement at the top of my lungs to randoms because I know just how bloody much it helps when you’re about to kill yourself with the pain. God I love that Arkala (as she turned out to be), I still think about that woman *punches chest*. Right, that was my story about Brighton, now to the most recent visit as part of my Brown Sign Way…

The aquarium at Brighton was opened in 1872 when Victorian day trippers were thronging to seaside resorts all over the country lapping up the new wave of entertainment and leisure pursuits available to them. The building was designed by Eugenius Birch (who also designed the sadly abandoned and now flame ravaged West Pier) and was built into the cliff face. The aquarium was the first recreational aquarium in the world and attracted much interest and attention, among the crowd pullers where a large octopus, 2 sea lions and a Norway lobster, all pretty standard for an aquarium these days but imagine the Victorians’ delight at seeing all these new animals from the deep, they absolutely loved stuff like this (stuff that we now totally take for granted and can see pretty much whenever we like). Concerts and plays were shown there for years and even the infamous Music Hall legend Arthur Lloyd played many times. But no sooner had it’s popularity boomed than the aquarium’s bubble burst and it suffered severe financial difficulties by the turn of the century. During the second world war the aquarium was closed and commandeered for use by the RAF, and upon reopening the owners desperately tried to rekindle public interest by putting on daily chimpanzee tea parties (eeek) in the 1950s. Later it morphed into a nightclub and even a motor museum.  By the ’70s it’s fortunes had changed when it became an extremely popular Dolphinarium (which I actually visited as a child I’m told) but major public disapproval of the dolphins’ living  and training conditions by animal rights activists and the public in general (culminating in big demonstrations outside) forced the Dolphinarium to close in 1990.

The Dolphinarium fascinated me, and as there’s only a little bit of information about it at the aquarium (understandably) I did a bit of digging myself.  There were 5 dolphins kept at the height of it’s popularity, they performed tricks and put on shows to thousands of visitors daily (pictures of the old Dolphiniarium can be found here). At the time of closure 2 dolphins remained, “Missy” and “Silver”, who were eventually released into the Caribbean seas as part of the controversial “Into The Blue” project in 1991. Despite efforts to track and monitor the dolphins only Silver was seen again, only once and in a malnourished and ill state. After this time neither were seen again, and public opinion at the time claiming they’d died almost straight away being ill equipped to deal with conditions in the wild due to their prolonged time spent in captivity.

After such a past dogged by misfortune the current owners Merlin, who own around 30 Sealife Centres around the world, did not have a small task to restore it’s reputation when they took on the struggling aquarium. The good news is though they seem to have done it. I’m always a little sceptical about visiting zoos, aquariums and parks that keep captive animals, but nearly always feel a million times better when I see and talk to the people who run and work at these places. The conservation work and research that goes on behind the scenes is enormous, and surely furthering our knowledge of sea creatures and our oceans in general, which in turn helps educate visitors must help limit future damage to our fragile environment, and surely this can only be a good thing. 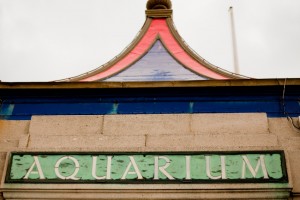 The 1920s pagoda entrance remains and one of the great things about this aquarium was the gorgeous Victorian architecture (which I absolutely loved). The aquarium holds the usual mix of sealife creatures with good information about each one. We pootled through, taking our time, until of course we were told there would be a talk about the sea turtles (which I didn’t even know they had) in 10 minutes, thus we sprinted straight to the main attraction, an impressive constructed reef where sharks and turtles as well as many different types of fish swim about. I’ve never actually seen a turtle, despite my efforts whenever I’ve been anywhere exotic so when I actually saw these massive creatures close up I was excited. Alan, the man who did the talk, did a good job of battling through the ever present background music (that was giving The Mose a near coronary every time it came to it’s crescendo) and talked about the plight of these massive gorgeous creatures. Only last week a turtle was found washed up on a beach in Australia with over 200 pieces of plastic inside it’s body, the result of human doing alone. 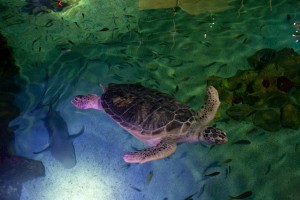 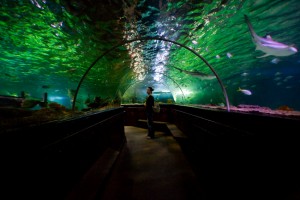 Me under the sea

The glass walkway underneath the massive tank is truly impressive (even though I thought it might be a bit of a let down) and was filled with appropriately open-mouthed children firing their parents millions of questions as the sharks and turtles silently glided around above us. Anywhere that makes kids get excited and say “wow!” all the time, well I’m a big fan, and this place certainly did that.

On the way out we returned to the touch pools we’d bypassed on our sprint to get to the turtle talk. Alan was again on hand to answer questions and encourage children to touch the starfish, sea anemones, crabs and various other animals in there and generally give a hands-on experience of sea creatures, and aren’t these experiences simply the best way to learn and inspire? I think so. Just look at Alan, he was brilliant. 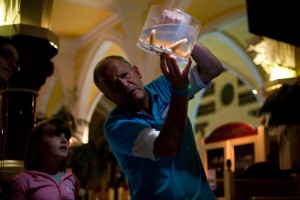 Our trip to the aquarium was great, it was informative and inspiring, with the exhibits and (crucially) the people that get visitorsinterested and engaged in the story of our oceans and our impact on them.  The stories behind places like Brighton Sealife Centre are always worth the effort to discover, finding out how it changed and adapted throughout it’s 150 year history not only adds a important element to the visit, it’s also a fascinating reflection on changing British society.