Stormy times in a whole world of barometers…. 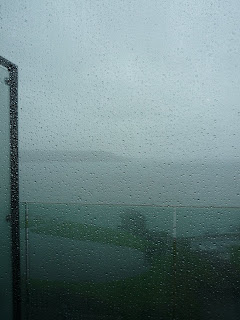 This was the view from Chris’ balcony window at 7.30am on Wednesday morning. After the blindingly gorgeous weather we’d had the day before this sight was mildly disappointing. Sometimes though having your options limited ends you up discovering random places you probably wouldn’t have gone to before and today turned out to be just one of those days.

Chris told me about a brown sign he used to pass on his way to work that he’d always been intrigued by which points to (and this is no joke) Barometer World. I’m the biggest fan of the quirky and off-beat, however even I was a little apprehensive about the potential of this nicheset of niche attractions. But it was indoors, somewhere new and there’s a man with sideburns on the website, so I was sold.
Barometer World is just through the little village of Merton near Okehampton on the north side of Dartmoor. Moors fascinate me, they creep me out bad and I can’t help imagining myself suddenly lost, alone and wandering the windswept eerie landscape Jane Eyre style, perhaps encountering a rabid werewolf or running into a serial killer hell bent on axing me to death or something just as ridiculous, and weirdly I have a massive pull to things that freak me out, so I donned my bonnet and set off for Dartmoor.

Once we got up onto the moor the weather was appropriately dank and foggy. Chris wanted to show me the sprawling and ominous Dartmoor Prison but we could hardly see our own hands in front of our faces, let alone the road and other road users, so I didn’t get to appreciate it’s scariness as much as I could have done. The point was this brown sign though and I was obviously bouncing off the walls with excitement when I saw it…

Barometer World turned out to be one of the strangest brown sign experiences I’ve ever had. First impressions were good and it looked just like the kind of place I love the best, deserted and a little quirky, as epitomised by the very specific visitor instructions around… 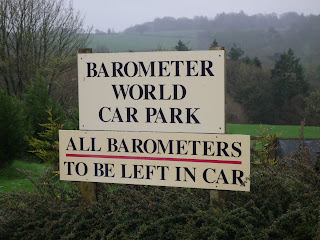 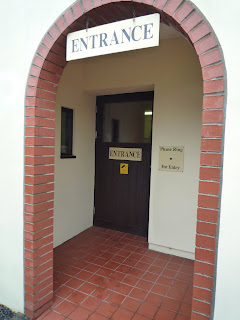 We did everything we were told (left our barometers in the car and rang the bell for entry) and were ushered in by the smallest woman in the world, who was clearly shocked and even a little bit upset when I introduced myself and explained my book/website concept. She said Mr Collins would need to talk to us and promptly roped off access to the area marked “Exhibition – No photography” leaving us to enjoy the cuckoo clock collection and fine assortment of barometers (made by the aforementioned Mr Collins himself) in the Barometer World shop. 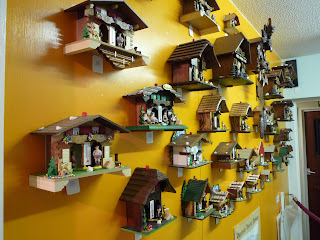 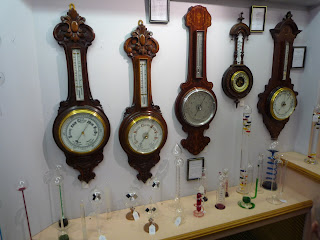 “Weather stick. Droops for rain. Points for dry”. Primitive but accurate.
My favourite was the evocatively named “tempest prognosticator” (which sadly I couldn’t take a picture of because photography was NOT permitted) and is basically a leach in a jar of water. Depending on the weather the leach takes on different forms and there’s a great little pictorial display of every type of leach position and what that means the weather will be. In stormy weather leaches (for some reason) rise to the top of their jars and try to get out. The museum leach was in an almost question mark shape so we kind of worked out that the weather was changeable, which it was, so I was impressed. Mr Collins has recreated (in amazing detail) a huge Victorian tempest prognosticator which was first exhibited in 1851 at The Great Exhibition in London. Designed in the style of Indian temple architecture, it is a complex and glorious gold plated extravaganza to predict storms using leeches, so when the weather is stormy the leaches all try to get out of their jars and ring bells attached to top of each jar, it’s the most bizarre but exciting example of weather forecasting and was clearly recreated and built with a lot of love.
Other pieces of interesting information were on the display boards (yep, those very expensive ones) and detailed many of the natural ways of forecasting the weather in the olden days, this one was my favourite: “If the ash flowers before the oak we shall have a soak, if the oak flowers before the ash we shall have splash”. I wonder whether anyone has done any scientific studies to see if this is true… I shall find out. 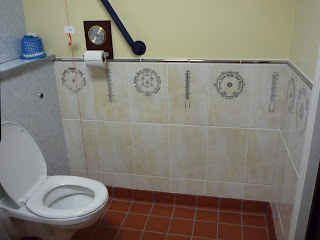 After the exhibition we said goodbye to the smallest woman in the world but not Mr Collins who was in his office (apparently emailing me, bizarrely) and left after visiting the heavily barometer themed toilet, complete with bird song activated when you opened the door and went for a proper Devon cream tea, which lifted our spirits no end, as you can see… 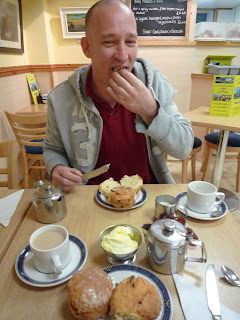 If nothing else Barometer World taught us a lot about the history of weather forecasting and why its important. We talked afterwards about the things we take for granted but don’t appreciate fully how they came to be, so it was an interesting visit despite the initial attitude from Mr Collins. All in all this informative and well thought out little museum (that doesn’t technically qualify for a brown sign) is full of excellent information and barometers (nearly all of which have been beautifully hand crafted) and it’s definitely worth a visit. Barometer World is also a brilliant example of how eye opening a visit to a little known place like this can be, even when you have concerns that it might be a bit boring and left field initially these places nearly always teach you things you didn’t know and help us understand the work undertaken by people who blazed trails just so we can lead the privileged lives we do now by investigating how our world works.
« Older blog
Newer blog »