How to win at greyhound racing – go for a Swift Gin

The joys of The Brown Sign Way not only come in the sheer quantity of brown-signed attractions across Britain but also in their variety. There are 93 different types of attraction and facility that get their own symbol on brown signs, for example:

Of course there are attractions that don’t fit into any of the 93 categories and these either get their own unique symbol (like Jodrell Bank Observatory and the Millennium Dome) or don’t have a symbol and simply have text on their sign. There are a few niche categories, like heavy horse and brass rubbing centres that get their own symbol and as much as you might think there aren’t really enough of them to warrant having their own symbol I like the idea that they’re important and British enough to be included as an officially recognised British attraction category.

An attraction that doesn’t have it’s own symbol but really should (and what a brilliant symbol it would be) are greyhound stadiums, so when Perry Barr dog track in Birmingham signed themselves up to my website it inspired me to research the history of greyhound racing in Britain.

The first ever officially recorded greyhound races were held at Manchester’s Belle Vue Stadium after an American enthusiast brought over the sport (which emerged from coursing) in 1926. By 1927 there were over 40 dog tracks across the UK and dog racing proved very popular, especially with the urban working classes. It enjoyed it’s peak in popularity just after WWII but as with many sports and leisure activities at the time visitor numbers began to wane in the 1960s.

My closest dog track, Catford Greyhound Stadium, sadly closed down in the late ’90s and I used to frequent it with my first ever boyfriend. My dad would give us tips (he’s very proud of his short lived stint as a professional gambler and still avidly watches the horse racing and knows everything there is to know about greyhounds) and I used to love watching all the gorgeously sleek and graceful dogs darting after a plastic hare at 40 miles an hour. Now I can only see it from the train up to London and it’s not exactly how I want to remember it, now it’s just abandoned and getting more and more overgrown every year. There are still 25 licensed dog tracks around Britain and I was heartened to find that greyhound racing is still alive and well and that now all tracks hadn’t followed the same fate as Catford. As luck would have it the day after signing up a very nice chap from Perry Barr got in touch and asked me to write about them as part of my adventures along The Brown Sign Way. As if I needed any more convincing he was throwing in dinner at their Skyline restaurant for me and my plus one, I was sold and quickly booked the next Friday off work.

My plus one was The Mose who I’d convinced to sack off a proper paying photography job to come with me at short notice and take some brilliant photos of the night. I booked us into the friendliest hostel in the world (Hatter’s Hostel) online and cained it up the M40 to Birmingham. 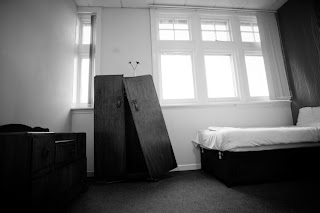 I don’t mind staying in hostels, they’re cheap and as long as they’re clean and the people are nice that’s all I care about. The Mose on the other hand cares less for slumming it and took a few photos of the room to illustrate what she has to put up with when travelling with me. Poor Mose. 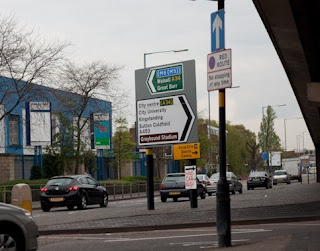 This is the sign for the stadium (one of millions of brown signs I spotted around Birmingham, rock on Brummies, I think you must be holding some sort of brown sign record here). We got to the track as soon as it opened so Mose could take some pictures and I could sit and calm down before racing began (I was getting a little bit too excited and my anxiety levels were through the roof). We were looked after by Kathy Burke (not the funny/unfunny one off the telly, depending on your humour) and I ordered a steak and shandy immediately, Jo went for a pie and a proper pint.

The atmosphere at the stadium had an absolutely amazing buzz of excitement, enhanced by the stirring bugle piping out “The Fanfare of The Common Man” (video below) before every race when it was time to introduce the dogs.

We studied the form and placed our bets with the betting woman who comes handily around to your table so you don’t even need to get up to take part. I was most proud of my £8 win on Swift Gin, I did only back him on his name alone, which you’re really not supposed to do, but I did anyway. 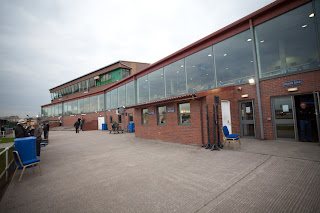 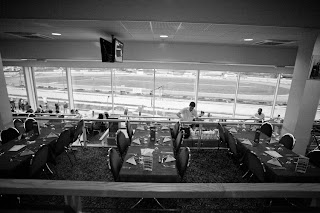 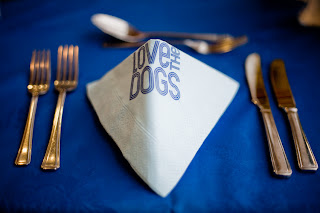 I especially loved watching the dads and sons at the trackside. The boys intently studied the form in their booklets and were consulting their dads on the possible winners, jumping up and down as the dogs were paraded and choosing their favourites. When the dogs sprinted past them at the winning post the boys went mental, they were happy happy little chappies, and it was brilliant to see them really engaged and enjoying themselves…. 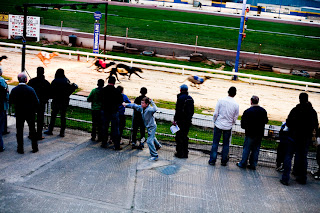 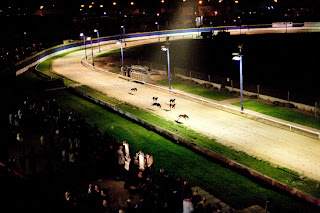 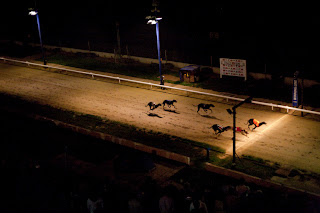 This is Swift Gin going over the line. “Come on my son!” I bellowed and punched the air (just to fit in). 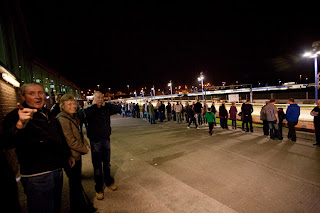 The guy pictured above was telling me all about his greyhound “Droopas Titas” just before he ran. He was absolutely ecstatic when the dog won and took us over to meet him. Here I am tentatively hanging near him with his owners and trainer, there were a fair few pats for that doggy that night let me tell you. What a beauty… 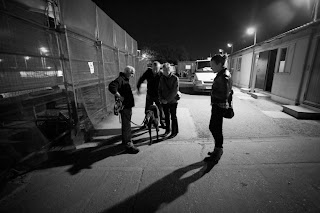 I was inspired by my dog racing adventure to look up a dog track near me but was sad to see that there’s now only 1 left in London in Wimbledon. After my visit to Perry Barr I think I’ll have to pay them a visit because I’d love to do that night again, lay a few more bets, have a few beers and talk to the owners of some lovely greyhounds about their gorgeous racing pets. It was an evening that you really got involved in and had to think about if you wanted to get the most out of it (Jo was better at studying the form than I was), the people were friendly and inclusive and I love that.

Incidentally greyhounds make good pets, and you’re reminded of this all around the stadium by the cute/hilarious posters featuring pictures of retired racing greyhounds in the hope of encouraging you to buy one. I have included a few below (my favourite’s the one on the trampoline)… 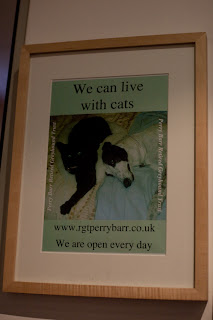 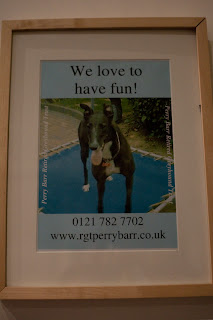 So, it’s not all about museums along The Brown Sign Way and I’m very glad I got the opportunity to go up and visit Perry Barr on my adventures, so next time you see a brown sign for a greyhound stadium why not follow it and win/lose a few quid on the dogs, I promise you won’t regret the detour.