At 1am on Monday morning I was in my old pal Chris’ sitting room in Plymouth after a non-stop 4.5 hour belt down the motorway straight from work. We’d spontaneously decided I’d visit and go brown-signing around the South-West after The Minack Theatre signed up to www.thebrownsignway.com. I was hell-bent on paying them a visit after reading what they had to say about themselves: “The Minack is the UK’s only cliffside open-air theatre, created by Rowena Cade in the 1930s, we’re now hosting an 18 week summer season of plays and musicals and open all year to visitors who just wish to explore this incredible venue”. A cliffside open air theatre on the tempestuous Cornwall coast, wowzers now that sounds cool. After a little more research I discovered their live webcam (permanently open in browser) which quite frankly cemented my hell-bentedness on visiting even more. I gave Chris a week’s notice to get some time off work and so it was that I came to be sitting on his sofa at 1am. We haven’t seen each other for about 8 years but I have Chris to thank for doing all my brown sign graphics early on when I finally decided to properly do my project full time. Ever since he’s been massively supportive of me and really encouraging of my pursuits along The Brown Sign Way, so the prospect of spending the next few days with him was something I was really looking forward to. 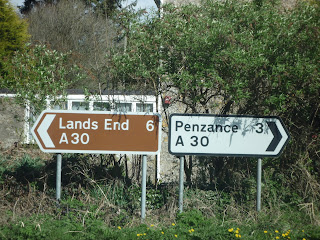 We set off for The Minack nice and early the next day to allow for some random brown sign action along the way, and those Cornish brown signs didn’t disappoint either.

I was excited about seeing the sign for Lands End because I’ve never been there before despite numerous trips to Cornwall. I’ve also thought a lot about doing a massive Land’s End to John O’Groats brown-signing trip so I was happy to find my starting point had the appropriate signage. I think it’s romantic to be somewhere where the land quite literally ends and to imagine yourself marked on the map, standing on the rugged toe of England as it juts out into the vast expanse of sea beyond, I like the thought of me being there on the very tip of Britain’s toenail. 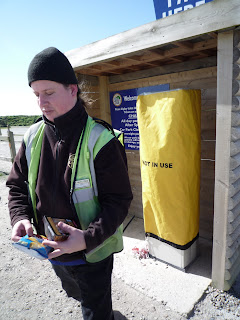 Before you get to do the view appreciation and imagining yourself on a map though you must pay for parking. It’s £3, a bit steep for a short visit but ho hum. On approach to the machine we encountered this man putting the “not in use” cover over it. “Errr, does that cover mean we don’t have to pay?” I said (ecstatic, obviously), “Well you should really, but I’m going on my break now, so don’t worry” he said. Chris told him about my pursuits along The Brown Sign Way which was met with a “Oh, right”, “Do you want to be on my blog?” I said “Errr, whatever” he said. So in honour of his enormous enthusiasm here he is.

We ambled around the craggy wave battered landscape of Lands End, took photos, got an earache and had my photo taken (squinting in the blinding sun) by the iconic sign. 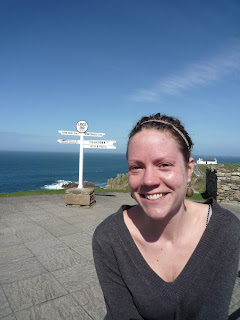 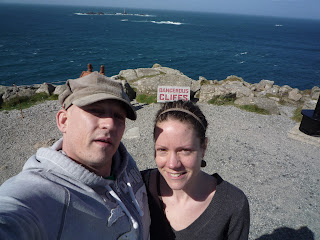 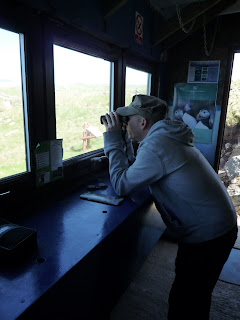 I spotted a little sign for an RSPB shack-cum-discovery centre so we went in and chatted to the lovely twitcher about what to see on the rocks below. We saw shags and gulls but no puffins, seals or sharks, which can often be seen if your timing is right, our timing of course was wrong. She was a very knowledgeable twitcher and talked about the times of year you can expect to see different birds and what they’re doing right about now, for example the shags are in their mating season at the moment (you’d be forgiven for thinking they were always in mating season) and have their nice colourful plumage on show to impress all the lady shags. She also told us about the big bully of gulls, the great black-backed gull, which is a real opportunist and basically eats anything, even other birds. I asked why it wasn’t classed as a bird of prey but I don’t think she knew how to answer, instead she made up a whole new species of bird just for me and referred to it as a “gull of prey” from then on. This is the view from the little hide, amazing. 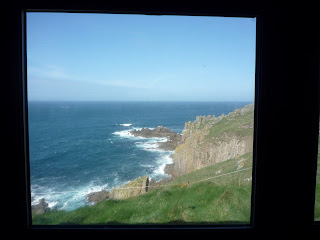 Lands End was exactly what it should be; rough, windswept, atmospheric and gorgeous, it was a new experience and now I can say I’ve been to the most westerly point in the British Isles. No time to hang around though, our next stop was The Minack Theatre, the whole point of the trip, so we stopped in the middle of the road to take a picture of the sign then followed it up the ridiculously steep winding hill to pay a visit (thank God we were in Chris’ car and not worrying about mine breaking in half trying to get up there). 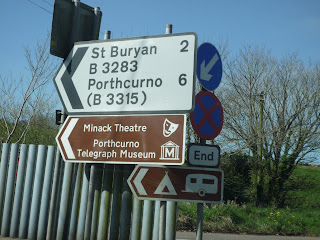 Once there we were surprised to see so many cars in the car park and joined the queue for entry. We were met by Phil Jackson the theatre manager, who took us to out to see the most amazing view over the bay with the open air theatre nestling into the rocks below, all planted up with exotic flowers and amazingly green grass providing the padding for the audience’s bums. It was impressive, but even more impressive when Phil told us about its history. 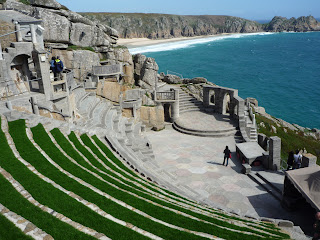 The Minack Theatre started life in the garden of a lady who loved putting on plays, she offered it as the stage for a local amateur production of The Tempest in 1932 and it proved such a unique and exciting venue that popularity only increased and more and more plays started to be put on there. Over the years Rowena Cade built the theatre as it is today with her own bare hands, lugging sand from the beach below to make cement and even hauling 15ft long chunks of driftwood up to make the actors’ changing rooms. The theatre wasn’t just a job for this lady, she absolutely lived and breathed it, constantly changing things and building new additions all the time; including the Juliet balcony (left of the stage) when she was 81 years old and etching every single title and date of every play staged here into the seats. The theatre never made any money in Rowena’s lifetime and despite numerous attempts to get financial support and assistance from various organisations they all failed, so she doggedly carried on doing it all herself and making up the short fall from her own pocket. This was something she not only dedicated all her time and money to but most importantly she actually physically did it all herself with her own 2 hands to make it work. Now that’s dedication. She was a character, clearly. 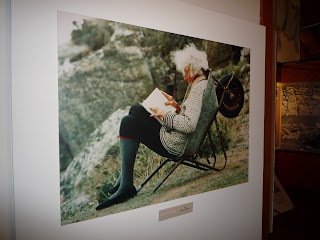 Phil has been at the theatre for 20 years and worked with Rowena in his early days there, it may be because of this that he’s passionate about keeping the theatre the way it was intended, making it accessible to actors and visitors alike but not letting it become ruined by it’s own success. There’s an impressive and varied line up of plays, storytelling, choirs, musicals and concerts going on throughout the summer and 120,000 visitors a year come and pootle around the theatre to admire the view and marvel at this brilliant feat of human endeavour. But because this place is so darn amazing the demand to visit and play at Minack is ridiculously high. Professional theatre companies are banging their doors down to put on plays here and day visitor numbers have sky rocketed, but Phil takes all this in his stride. Because of it’s inaccessible location no coaches are allowed in the car park and so hoards of tourists don’t descend on the place in their multitude of coachloads, the professional theatre companies do get a look in but the majority are amateur players, they are the guys the theatre was quite literally built for afterall. I was happy to see the potential of making a lot of money from the theatre being shunned and keeping the core values of an extraordinary lady alive was what mattered. Here are some more pictures of this unique and amazing place… 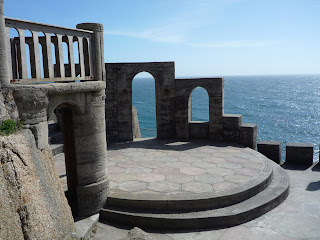 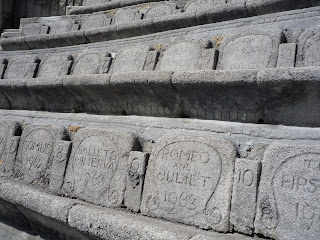 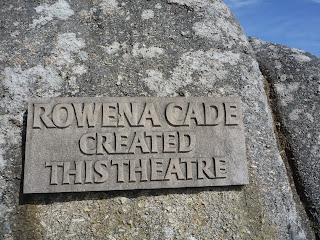 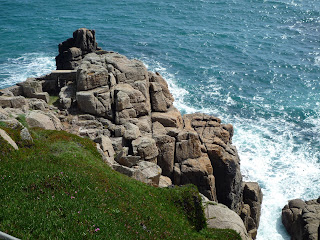 We walked all over the theatre and sat everywhere we could, I tried to be a modern day Juliet on the balcony but in my leather jacket and jeans I wasn’t quite pulling it off, then we headed up to the webcam and I phoned my family so they could look at us on the computer. I did a little dance and lots of waving like a goon, then we rounded off our visit with a pasty in the tea room overlooking the bay.

Needless to say this place rocked and we loved it. Phil and his staff are keeping the spirit of Rowena Cade alive and totally aren’t about chasing visitor numbers or cashing in on something so unique and potentially easy to make a lot of money out of. Instead the focus is on amateur dramatics and providing visitors with an amazingly good value for money experience in this jaw-droppingly dramatic setting. I was more than just a little bit impressed, excellent work The Minack Theatre Trust.