Day 2 of Matt and Amanda go brown-signing: Visit to a reptile zoo at the deceptively named Beaver Water World 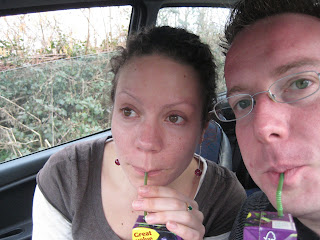 Matt and I decided that another brown sign trip was in order after the mildly disappointing day we’d spent wasting petrol driving around South West London/Surrey, being turned away from Hampton Court Palace and getting stuck in traffic jams that made us go a bit mental. As an ode to our “Henry VIII says no” day we took this picture of us eating our packed lunch in the car, kindly bought by Matt from the petrol station consisting of Ribena, donuts, Revels and Wine Gums (both big bags) which we ate all in one go and regretted straight away.

In order to choose the destination of the day Matt went onto Google maps and located a random spot. I asked him to try and randomly select somewhere in the south east because 1) I have no money to buy more than £10 of petrol 2) I was working at 5 and 3) My car is very likely to explode on the motorway, so his initial selection of High Wycombe in Oxfordshire was vetoed. After re-selection he told me we were going to Pilgrims Way near Biggin Hill and which we’d navigate to via The Brown Sign Way. Much to my joy I noticed a “Beaver Water World” in Tatsfield marked on the map, which I hoped beyond all hope had a brown sign because I don’t think I’ve ever seen a beaver before and I’m a big fan of doing new things (even if that does just mean looking at a beaver). 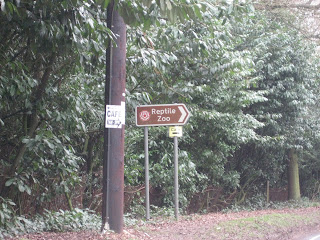 So we drove into Tatsfield keeping our eyes peeled for the brown sign to Beaver Water World, confusingly though we happened up this sign instead. We followed it and found that this Reptile Zoo sign was bizarrely pointing the beaver world we were looking for. Confused but relieved we ate our packed lunch in the car park and nauseasly headed in.

To get to the entrance you have to walk through an aquatic shop (more confusion) which was frankly the busiest aquatic shop I’ve ever seen, full of wayward children bouncing around the tanks clearly absolutely ecstatic to be there. I’d tried calling ahead but no-on answered so I approached the young man with a lizard on his shoulder at the till and began my spiel about my brown signs book/blog/website/ridiculous life. He got the manager over who was a lovely lady, but instead of talking to me about the centre she talked mainly about the difficulty she’d had with the council replacing a damaged brown sign. I tried to steer away from the brown sign thing and focus more on the place it was pointing to but she was clearly in a strop and she needed to get it off her chest, so I let her. Finally though she stuck yellow stickers on us and we went in following the similarly yellow stickered party of 7 year olds in front of us. 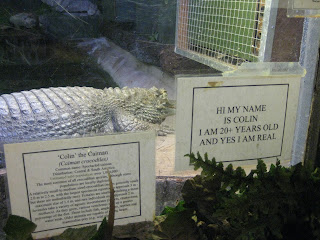 Beaver Water World began morphing from an aquatics shop into a reptile centre in 1980 when a python was rescued by a local pest control officer and was found a tank to live in there. He soon grew out of his tank and a mate was found for him. It was decided that a large snake room should be built at the back of the shop so they had somewhere nice to live and could be shown to visitors. From there the collection grew and slowly they began acquiring other abandoned animals that needed homes, and not just reptiles either. Now the “zoo” (can I call it a zoo?) houses a vast variety animals including tortoises, crocodiles, marmosets, insects, owls, rabbits, lemurs, and (phew) beavers. The reptile room at the back of the shop is huge and full of lizards and other scary things, including Colin The Crocodile pictured – love the sign) and also this massive tortoise which was out trotting around happily with us visitors and trying to eat plastic leaves… 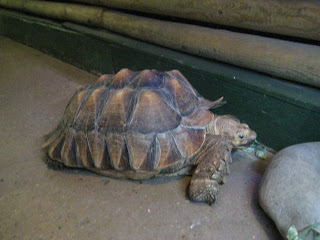 Here are some more pictures of what the reptile room had to offer, after a while I got a little bit freaked out by the reptiles doing their prolonged stints of stillness then sudden mental scampering around their tanks so we went outside to see what the rest of the zoo was like. 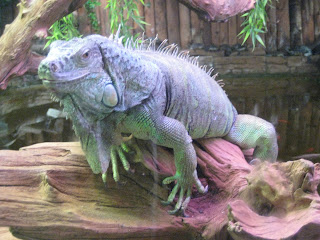 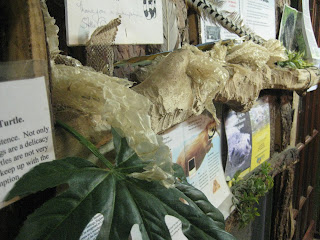 Outside were aviaries housing an assortment of animals, including birds of prey which I loved obviously, and some animals you wouldn’t normally expect to see in an aviary, but they all seemed to get along fine nonetheless… 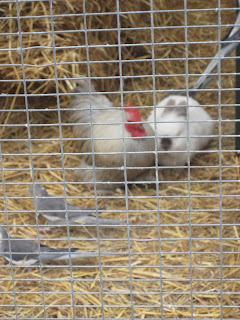 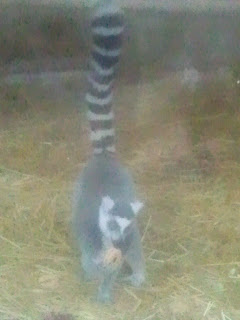 I liked the lemurs the best though, with their little inquisitive faces and constant jumping around the enclosure having a great time. This one here is having a little Jammy Dodger moment look.

The lemurs reminded me of a brilliant few days I spent in China when we rocked up to a random nature reserve in the middle of nowhere called Longhu Mountain Natural Reserve. I’d seen it marked on the map and it looked intriguing, so instead of doing any research and planning we jumped on a train to the nearest station then hitched a lift on a wagon pulled by a water buffalo and arrived at the gates. Quel surprise it turned out they weren’t exactly set up for random backpackers like us rocking up and had about 5 words of English between them. But in their lovely Chinese way they allowed us to stay in the dorms usually reserved for visiting academics, fed us noodles and took us out at twilight to see lemurs traversing limestone cliffs to their caves where they spent the night.  The nature reserve was set up and run by the same man who was key in the conservation and protection of pandas in the 1980s and single-handedly bullied the government into changing the law to try and stop them becoming exinct. He’s a man who’s passionate about preserving natural habitats and stopping the mass destruction of large swathes of land to make way for economic progress in the form of factories, mines and quarries in China and this reserve was set up to protect rare black-faced lemurs in the area from that threat.

Our guide was very enthusiastic about the lemurs and wanted us to see as much as we could, he gesticulated a lot and spoke in loud slow Mandarin (as we all do to stupid foreigners) to try and impart as much of his knowledge as possible. They weren’t very easy to see so he brought a big monocular and we took turns watching them jumping along the rock face. I was trying to take photos which were terrible because we were so far away so our guide took my camera from me, put the lens through the eye piece of the monocular and took this photo, which I love… 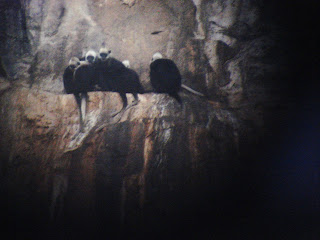 So seeing the lemurs at Beaver Water World bought back some happy memories.

I’d been mainly looking forward to seeing the beavers though, so we headed to their pool, characterised by loads of sticks and dams, obviously. Here’s the brilliant information board telling you all about them, and well worn signs like these are my very favourite… 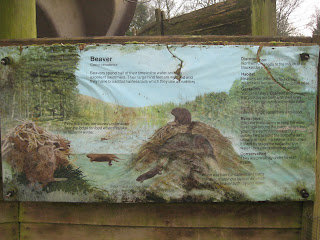 After standing around for some time at the pool though it was clear that the beavers weren’t coming out to play. Apparently they make dams and do their thing at night so the best time to see them is the late afternoon when they finally get up, and what a surprise it wasn’t late afternoon, so I left without my cherry popped, still a beaver watching virgin.

Beaver Water World gets 10 out of 10 for effort, it’s one of those simple but excellent attractions that doesn’t try to be something it’s not, so no well manicured paths or perfectly built enclosures with snazzy information boards but instead everything is presented in meaningful and fun ways, using the age old medium of paper pinned to posts, a perfect information sharing medium. Children can run around exploring and everything works around everything else (like the rabbits in the aviaries for example) and I love that. This place only became an attraction because the owners of the aquatic centre wanted to show people a rescued snake, then when their collection grew it was because they cared about abandoned animals and wanted to share them with visitors, so it became a zoo. The thing I like most about doing what I do is getting to see the good work that people do for something they feel so strongly about, and Beaver Water World is a classic example. Shame about the lack of beaver watching but to be honest it didn’t matter, I loved it all the same.