The next brown sign trip started with a pretty much uninterrupted drive up to Robin Hood’s Bay, just south of Whitby in the North York Moors. By “pretty much” uninterrupted I mean it did include a quick stop at an OK Diner on the A1. OK Diners are the most amazing motorway services ever and leave me dumbfounded as to why they haven’t made their way down south to replace the horrendous Little Chefs I am so used to avoiding. These restaurants have totally pulled off the 1950s-themed diner experience, with rock n roll playing and the kitsch Americana adorning every surface. I simply cannot drive past one. I have to go in and order myself a massive burger with a thick shake and feel a bit unwell for the rest of my journey. They are brilliant. 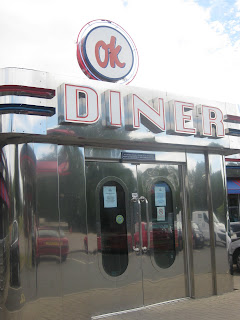 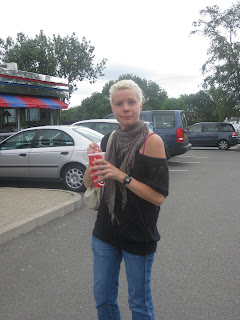 Unbelievably I managed to get up to Robin Hood’s Bay on half a tank of petrol, how that’s possible I really don’t know but I did and got to our very sloping but amazingly picturesque campsite by 5pm, and apparently just as the wind started to properly blow. Putting up the tent proved difficult, and it didn’t help that we’d already broken a tent pole on a practice run in the garden. Even with the help of a few friendly campers the erection of our tent was nothing short of farcical. We made a botch job of it, hoped it wouldn’t rain and boiled some pasta for dinner. The views were gorgeous though and we happily sat until bedtime (9pm) soaking up our surroundings. 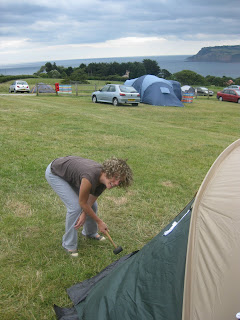 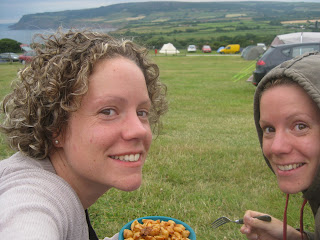 Sadly the campsite (which had more tents than caravans, excellent) didn’t technically have a official brown tourist sign, but they did have a home made one, and I have a lot of respect for their ingenuity, here it is… 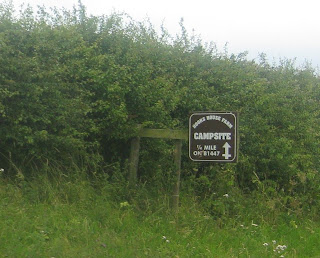 Not the exact same colour or font for a proper brown tourist sign but a great effort none the less, and for £7 per adult per night with hot showers you don’t need to feed 50ps, friendly staff and the best views I’ve ever had the pleasure of unzipping my tent to, it is ridiculously good value for money (Hooks House Farm www.hookshousefarm.co.uk).

The next day then a proper brown sign effort had to start, so the first stop was National Trust owned land in the form of a rather small and eerie village called Ravenscar, also known as “the town that never was”. Mystery and intrigue, deal me in, two of my very favourite things. The coastal land here was bought in the 1890s with the view to developing it into a Victorian holiday resort, good enough to rival Scarborough. Streets were mapped and dug out, space for houses, shops and hotels were allocated, plots of land were sold at auction and a brick works was even opened in anticipation of the large scale building to be done. However the interest in Ravenscar was not nearly as high as the developers had hoped and in the late 1890s the estate company went bankrupt. What is left is a rather windswept and bleak place, with a few houses and a tea room for the walkers of the coastal paths. You can stroll down roads leading nowhere and climb overgrown steps to the abandoned railway station though. This is the view looking up the line standing on the platform. 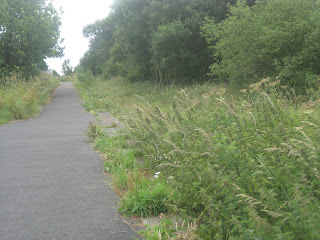 It was quite strange to imagine steam engines full of people chugging through this now quiet and deserted place, I imagine it was also quite scary to be a passenger in one of those trains back then too; as the highest point on the Scarborough to Whitby Railway the ride up to Ravenscar sounded terrifying. The climb was a ridiculously steep 1 in 39 incline from Robin Hood’s Bay which meant that trains often didn’t manage the ascent first time, in this event they took long run ups to try and make the summit. What I love about this is the Victorians’ dogged determination to power through any problems posed by their new found leaps forward in science and engineering. Just imagine the scenes as trains slowly ground to a halt half way up the hill, while day trippers holding onto their hats hung out of windows laughing gaily as the carriages began their perilous descent back down the track, only to prepare for another (probably just as unsuccessful) attempt (interestingly I too was taking long run ups all over the moor for the entirety of the trip and I know just how hair-raising the very real possibility of not making it up the next hill is).
After taking in the bleakness of Ravenscar (and feeling a bit bad about not setting off on a hike like everyone else parked in the car park) we headed for Scarborough. Being a spa town built on the back of the assumption that natural waters from its springs magically cured everyone of any ailment, I hoped there would be a brown sign with a little fountain on it pointing the way to Scarborough’s spring. I was only to be disappointed. We had a nice walk along the beach and Jo took pictures of children on £2 a go donkey rides trying to not look like a paedophile but we didn’t see any fountains or springs. I decided to ask a local in case I was just being stupid and missing something and was informed that a fountain did exist as part of the spa complex but now is mostly covered by a dirty great roundabout. At a little opening in the sea wall however there are some steps down to a fountain which commemorates the existence of a spring originally used by the townspeople. We headed down these very slippery steps to pay homage. I felt a bit sad for the little thing, sitting there all alone, still trickling out the iron rich waters that are no longer hailed to work the miracles they once were. Instead a sign has been nailed pointedly above it which reads “NOT drinking water”. Here it is… 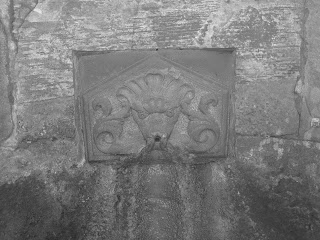 Also along the seafront was this sign, probably the biggest “no dogs” sign ever to exist in the whole world. It was about 7 feet high, I mean it… 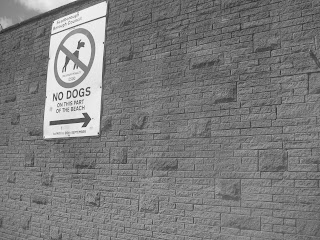 Just to prove Scarborough did count as a brown signed attraction here’s a picture of me and The Mose on the beach (which to be fair I didn’t check had brown signs with sandcastles pointing to it, but I’m telling myself it did, so it counts). 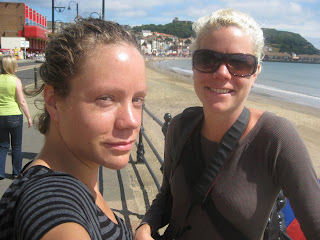 We then headed out of town and into the forest, Dalby Forest to be precise and you can imagine my sheer elation when I saw this sign… 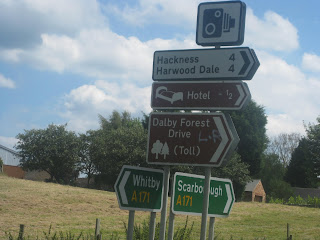 I veered off the road sharpish and started the drive. These signs mean you are entering an area managed by the Forestry Commission, which are effectively sustainable woodlands that timber merchants have rights to cut down and sell but are also open to the public and offer some brilliant activities too. I love the Forestry Commission and have been massively impressed by the events they organise throughout the year. I had already arranged badger watching up the road for that evening (which I was wetting myself about) so I was very happy to do even more Forestry Commission related things wherever possible. The drive was peaceful and pretty, with ample opportunities to stop and explore the woodland (again though Jo and I avoided partaking in any walking).
After being rudely jerked out onto the busy main road after the scenic drive we decided it really was time to enjoy the countryside on foot and stop belting it around the moors in a desperate attempt to see everything they had to offer in a day. So we dropped off the car and grabbed some provisions from our sorry excuse for a tent and started our afternoon walk down to the beach of the evocatively named Boggle Hole. We found ourselves on our second disused railway track of the day, climbing steep roads and crossing fords. The tide was out at Boggle Hole, exposing rock pools galore and a very overpowering sea smell for your nostrils (just like at another quirky named beach near Broadstairs, Dumpton Gap, where I used to go rock pooling as child, ahhh happy days…). We prodded about and Jo pretended she was a beach comber for a bit, but only a part time beach comber who only really wanted to get to the pub, so we picked our way around to Robin Hood’s Bay, headed for The Dolphin on another steep hill and ordered 2 of your finest pints of Deuchars please barman. Quality afternoon. 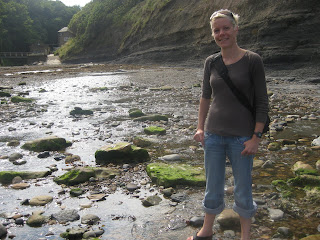 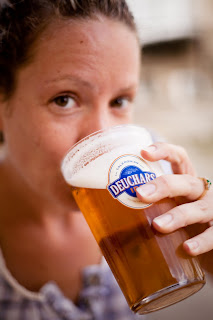 The time came to quickly woof down some boiled potatoes and cold pork pies (YUMMY) and set off for Cropton Forest for a spot of badger watching. We arrived after getting terribly lost and being distracted by a brown sign for a Roman road (and taking it, obviously). It was cool though, even if it did land us with a bad first impression, here it is. 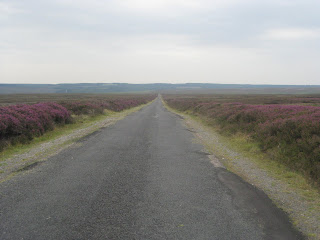 When we got to the meeting point we chatted with the Forrester about Roman roads and the big bums of badgers and all headed off for the hide, tucked away just above one the many setts in the forest. As we approached, a badger was sitting on a tree stump as if awaiting our arrival, we all stampeded in only to see his big bum disappearing off just as we all got comfortable. Gareth the forester is extremely knowledgeable and he really loves everything badger. This is a man who totally lives and breathes the forest, and he’s only been to London twice and hated it, and I have a lot of respect for that.
Soon enough the lady badger (or sow if you will) came out and entertained us by hiding behind trees and finally nibbling on the peanuts that had been left out for her. Here are some pictures of the old girl… 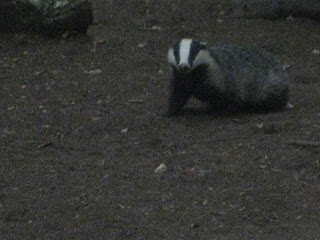 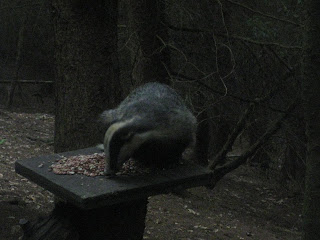 This sett has been around for over 90 years, obviously with various changes in occupancy. The current 3 inhabitants advanced a hostile attack on the previous family around 5 years ago when and the alpha male challenged for the leadership. When he won the contest he proceeded to kill all the cubs and run the sows out of the set. Charming. He lived alone here for years after this, probably feeling a little bit lonely and maybe regretting his rather bloodthirsty behaviour, until a female finally came along to join him and then another, rather skittish and nervous chap joined in to make up their current little ménage-a-trois.
Gareth talked about the badgers and the forest in general, telling us all about the night jars, goshawks, jays and owls that were all happy forest dwellers, as well as intriguing badger behaviours, like their insistence on using ancient scent paths to make their way across country, even if that means crossing dual carriageways to follow them, which explains the high proportion of dead badgers on the sides of roads in certain areas (for example the aply names Badger’s Mount in Kent).
The badgers didn’t disappoint and we saw all three for quite prolonged periods, snuffling around, eating and making their sett nice and cosy by pulling pine needles in for bedding. But I’ll be honest, at around 10.30 Jo and I were almost falling asleep and were pretty happy to see the skittish chap badger finally leaving the feeding table. We said our goodbyes and made our way through a carpet of frogs on the road, which I have to confess, many of which were left squashed in our wake. I did try to avoid them, but it was totally beyond me to miss them all. RIP flattened froggies.
We went back to our sloping ground and bedded down for the night, happy with the thought of sausages cooked on a precariously balanced camping stove in the morning, oh the joys of camping.