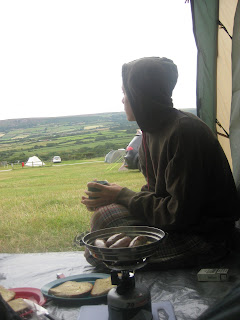 The nights sleep, despite significant tiredness when we hit the sack, was not such a good one, in fact, let’s be honest, it can probably be ranked as one of the worst ever. Predictably I hadn’t checked the weather forecast before we left and assumed that being in mid July meant likelihood of good weather. Unfortunately I was proved wrong (as always) at around 1 am when the heavens opened and we were rained on hard for the next 6 solid hours. I had nightmares of the tent, and ourselves, being swept away by something very much resembling a tidal wave and had visions of me unzipping my sleeping compartment to the sight of drenched food, bags and cooking equipment in the morning. When the rain did finally stop (well, slowed to an all engulfing heavy mist) and I checked for soakage I was shocked to find that our tent building was clearly not as bad as we’d thought and everything was dry. We cooked sausages to celebrate (in the non fire retardant tent of course), but I’ll be honest we were both feeling a little jaded and weren’t looking forward to the fishing I had been so excited about before I left.

The sausages (of course) helped, so we pulled ourselves together and had showers (amazing that a shower when camping is the most invigorating shower you could ever hope to experience, even if it’s a bit of a dribble and you’re scared to take your flip flops off in case you catch a verruca. The jump from tired, achy and a little bit depressed to raring to go and happy is something I have always been so unbelievably grateful for on every camping holiday I’ve ever been on). We got into the car and made our way to a fishing lake which had been recommended to me by one of my new found twitter followers (www.fishkeep.net) called Wykeham Lake just on the edge of the North York Moors. We rocked up to the car park and saw the peaceful scene of men with their rods all sitting around a very picturesque lake with lilly pads and dragonflies flitting around and birdsong filling the air. I felt very much like a clueless woman approaching the little fishing lodge and therefore open to much mirth among all those fishermen. We talked to the manager of the lakes, Mick, and I explained my tour of Britain via The Brown Sign Way. He made the usual sceptical face I see a lot on my travels when I explain my mission but he was soon enthusiastic and he said he would kit us out with everything we needed, giving us rods, bait, hooks and things which all needed in depth explanation. Luckily a young fisherman by the name of Jake, who was probably a bit amused by twins wanting to go fishing on a rainy day because one of them was obsessed by brown tourist signs, took us under his wing and (thank God) stayed with us all day showing us the ropes and teaching us how it all worked. 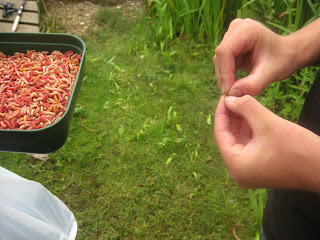 There are 5 lakes altogether at Wykeham, all of them disused gravel quarries. We were shown to the carp lake where there was an “abundance of little fish” in the hope that we would catch something if we fished here. First job before any catching began though was to spear through maggots and get them onto your hook. It really wasn’t very pleasant, especially when you put a hook through one and it spurts blood and juice all over your hand and under your finger nails, mmmmm.
No sooner had I maggotted my hook and cast my line (after a few practice attempts where I nearly took a few other fishermens’ eyes out) I saw my little float being pulled down under the water, telling me a fish had bitten. I started reeling him in and finally he appeared out of the water. I surprised myself at how ecstatic I was to have caught my first fish. Our young teacher was very encouraging and recorded the moment. After the initial joy of the first catch I returned the little chap to back to the lake and started getting right into the fishing malarky. Soon Jo and I were pulling them out of the water like pros. Here are some more pictures of our achievements. 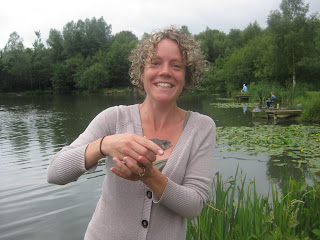 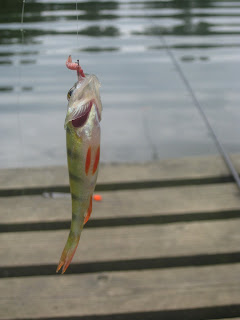 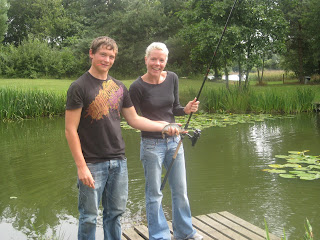 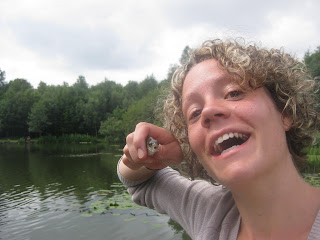 At one point Jo was left alone (she had disproportionately more help and attention from the young fisherman FYI) and managed to hook herself a carp. I didn’t actually see this but worked it out from her tranquillity shattering eeeks and “MANDA!! HELP!! I’VE GOT AN ABSOLUTELY BLOODY MASSIVE ONE ON HERE!!” screams. I finished taking this picture of me and my latest catch and went over the help. Sadly Jo’s reeling was not as good as her hooking and the carp extracted himself from her line after about 30 seconds, she does still maintain that she caught this big fish though. After that little excitement we carried on catching our small but still satisfying fish and sat on our camping chairs soaking up the the sun which had finally decided to make an appearance.
It is easy to see why men escape to lakes like this one to have some quiet man time catching fish, sitting in such beautiful surroundings and doing something the human race has done for as long as we’ve had the intelligence to work out fish can be fooled into swallowing maggots on lines. What I liked most there was the dads and granddads fishing with their sons and grandsons, teaching them the skills to catch their own fish by applauding and encouraging their efforts and taking photos (like we did) of even their smallest catches. I would have loved to have taken some of what we’d caught back to the tent and barbecue it for dinner, to complete the logical cycle of fishing if you like, so next time I’m heading for the trout lake so I can do just that. The guys there were brilliant and unbelievably patient and encouraging, another bonus was the free hot drinks in the lodge, what a quality attraction. I really loved the fishing experience, it was a day characterised by long periods of quiet and tranquillity punctuated by short bursts of activity and elation. We came away feeling really proud to have learnt a new skill and best of all I got to engage in something I like doing best, actually doing something with my own 2 hands and seeing the fruits of my labour (even if that did mean just quickly taking a picture and then throwing my fish back in the lake).
It had been a good but long day and we thought it would be only appropriate to go and eat some fish in the seaside town of Whitby for dinner. So we drove up just as the day trippers were leaving and walked around the little harbour, admired the multicoloured cottages, avoided the high street and ordered a pint in the pub overlooking rowing races on the water, it was really rather civilised.
The plan hadn’t ever been to go out. But after the taste of some strong ale and fish and chips in your belly you get that pull to stay out and enjoy it a little bit more I find. So we strolled back to the car, via another pub (I only had an apple juice I promise) and drove over to Scarborough to meet my boss who was up there doing all the brilliant production of the summer shows at Scarborough’s brand new open air theatre. Let’s just say we didn’t stay sober for long and the result the next morning can probably be best articulated through an image… This is Jo having “packed up” the tent in a shockingly bad state of mental and physical health. What a great way to be just before a 5 hour drive back to London, no? 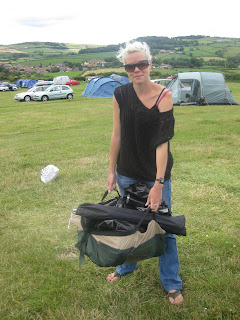 We set off for home, having absolutely loved everything we had done in and around the North York Moors. My car was sounding more terrible than normal however and I’m almost sure I’ve caused some sort of horrendous exhaust damage because the noise when climbing the steep hills around there was worryingly bad. Never trust your Sat Nav or your sister when it comes to navigating around the moors. The Sat Nav takes you technically the quickest but usually the most dangerous route and your sister looks at the map, sees some white spaces with wiggly roads and directs you to them because she thinks it’ll be scenic, neither sadly take into account the state of your knackered car. It was certainly scenic but I have never been so scared in all my life that my sister and I were slowly and noisily heading towards our untimely deaths (and there have bee a few of these instances now) as we started climbing a road with a large “33% gradient” sign on it. Having just descended a road of 23% there was no way out so we sat rigid and virtually horizontal in our seats praying the car would make the summit without the engine falling out or the exhaust sheering off. How it managed the ascent God alone knows, but I do know I’m not doing it again, well, maybe in a massive Land Rover but certainly not in my sorry excuse for a car.
The only thing to do in these hungover and frightening situations is to find yourself your nearest OK Diner, so of course we got ourselves onto the A1 and ahhhh, sigh of relief, here we are in said diner, feeling just a little bit better. 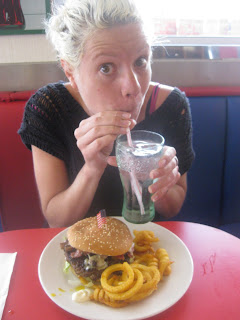 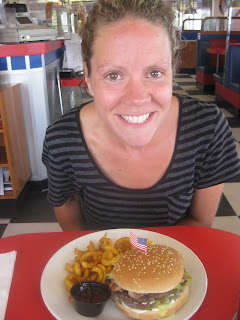 I have to confess to ignoring a brown sign for a Doll Museum just near here, awful I know. But I’ll be honest, the pull of the food was just too much and the state of tiredness and hangover were dragging me like the force of a supersonic magnet to my bed. I will be back to rectify my mistake though doll museum, I promise.
So back to all things South East London once more, and to do some work to get some money for the next trip! In the meantime I am planning a whole new exciting website to track everything brown tourist sign related with fun things like interactive maps and the long term plan to get as many brown signed attractions listed as possible, so everyone will be able to see the whole array of cool, fun, amazing, quirky, beautiful, interesting and thought provoking places there are, all signed by those brilliant little brown signs I love so much.
Until the next brown signed attraction catches my eye then you all, ta ta…