An emotional windmill and Nature vs. Industry (Nature 1 Industry 0)

Recently I have been thinking (a lot) about why I like brown tourist signs so much, and why I want to write a book about them. My good friend Rob Archer, Occupational Psychologist extraordinare, asked me some very simple but enlightening questions about what I feel when I go off visiting brown signed tourist attractions.
Firstly I said I was excited at the prospect of discovering something new, meeting the people who run the places and that I feel good when I experience something fun and different. But when he asked what actual physical sensation I get when I thought about brown signing, I realised that I felt something like a nag, a small pain or knot, a little bit like worry, in the pit of my stomach.

After much teasing to get the truth out of me, and when I was brutally honest, I had to admit that I felt sad, a bit scared and a lot lonely when I do the random things that I do. And it was a hard thing to have to say. Although I always knew this feeling was there, it was just under the surface and I could ignore it or override it when I wanted to (all the time), but making the decision to embrace that feeling, use it and talk about it was a strange thing. I guess it’s like the feeling you get after not visiting an elderly relative for some time, the kind you call occasionally and receive a cheque from on your birthday but isn’t factored into weekend plans. Then one day you realise you’re repressing them, massively, so you go and visit, feel unexpectedly overjoyed that you did (maybe have a little weep when you get back in the car) and decide to go more often.
Long story short, I decided it was time to face my fears, to sit and feel them, welcome them in if you like, and I knew just where I needed to go to do it. Many years ago I happened upon a windmill in Pitstone Green, Buckinghamshire with my twin sister and ex-boyfriend Chris when I was living in Oxford, we rocked up just as the sun was setting on a freezing winters day. The windmill stands majestic in the middle of a field and as you approach, when it starts to loom up before you, it’s awe inspiring power and beauty is just amazing. The first time I went I remember fighting the overwhelming urge to burst out crying. For some reason the windmill was terribly sad and the creepiness of it totally stood for what drives me on to discover new places and do the things I do. There is something so fascinating about the deep root of what an attraction is about, and (for me) the lonelier and scarier it is the better.
Ok, that’s the big introduction to today’s visit over, so this is how it went. Firstly my car is not legal to drive, it failed the MOT and I can’t afford to get the garage to do the work, thus I have a stack of various car parts that I bought blind from a breaker’s yard up north sitting in the hallway waiting for me to fit them, until this time however the car remains driveway bound. After a little gentle persuasion I convinced my mother to let me borrow her car (an error it turned out, but that’s a whole other story). So with the niggle in my tummy and the sharpness behind my eyes I set off for Buckinghamshire, all you really need to know is that the traffic was bad and I didn’t have any money for the Dartford Tunnel, both predictable and therefore even more intensely annoying, but I did get there in the end. 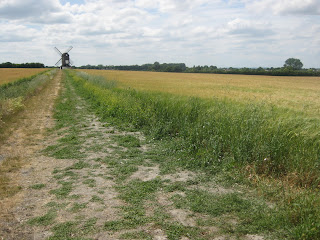 I happened upon the windmill in much the same way as I had years ago and found myself really quite nervous about getting out of the car to go and see it again. It turns out that Pitstone Windmill is actually the oldest windmill in Britain and dates back to 1627, so the brilliant wrought iron National Trust sign told me. It stayed a working windmill until 1902 when The Great Storm damaged it irreparably, ending it’s working life. The windmill was abandoned and it was only in the late ’60s that a fund was raised to buy materials to restore it, undertaken by local volunteers. This is the windmill from a distance, spooky feeling running through your veins? Mine too.  There was no-one about, just the way I like it, so I wandered the path through the field and stood underneath my windmill, taking in all it’s massive scariness. I even dared myself to touch the sail which totally freaked me out but I decided it was all part of the process and did a little jump to make it. I took pictures of it, walked around it, took it in from every angle, then finally sat underneath it. Here are some more pictures… 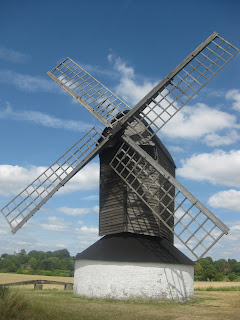 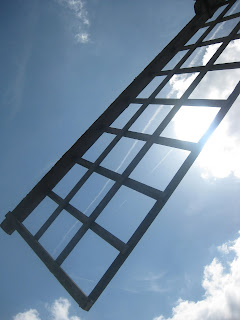 The thing that struck me most was the noise it made when the wind blew. Pitstone Windmill is a post mill so it was designed to be moved around it’s base depending on wind direction meaning the sails can get the best angle for optimum force. Now the mill is locked in place so it can’t move, but when gusts blew around it it creaked and groaned, as though it wanted to be set free, so it’s sails could start turning once more. I imagined what it would be like to watch it slowly come to life as I stood in front of it, and that gave me the willies let me tell you.
I have always been in awe of the things that stand for the human battle to tame and harness the elements; big ships, hot air balloons, lighthouses, dams and mines, stuff like that. So I sat for a long time taking it all in underneath the windmill’s sails. I realised that my feelings towards the places I go and my relationship to them lies at the very heart of my desire to discover them. I felt somehow safe and happy in my loneliness there, and despite the vertiginous feeling that places like this give me I still feel a massive pull towards them. They stand for something great and important, more so even when they are redundant, no longer doing the job they were designed to do. I quite literally feltthis windmill’s history and story as I sat under it, from the sounds it made in the wind to the sight of it’s huge sails close up. It was really quite an amazing experience. I will never repress that old relative ever again. 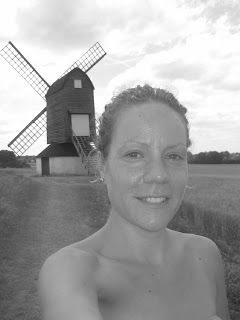 I was hot and sweaty and I promise you I wasn’t naked, but here’s me leaving. Bye bye windmill, it was emotional. Sigh.
I wanted to head to the RAF Museum on my way home because 1) it is Battle of Britain Day today and 2) the world record for most amount of airfix Spitfires made in one day was set there recently, and that is so geeky it’s cool in my books. But as I was heading out of Tring I saw this little sign… 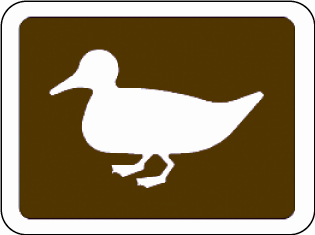 I got excited, so I followed the brown sign, ignored the plaque in the car park saying “donate and display” (I didn’t have enough money for the Dartford Tunnel let alone a car park, so I hoped there wouldn’t be any over officious car park attendants) and headed in. The duck had directed me to College Lake, a disused chalk quarry reclaimed by the good people at the The Wildlife Trusts and now a haven for a whole host of flora and fauna, including a few of my favourite, birds of prey. The visitor centre is a brand new eco building which recycles it’s water, has grass roof insulation and is built from reclaimed site materials. It opened in May when it qualified for brown tourist sign status (hurrah!) and what a jolly good thing too, this place was simply gorgeous.
I met the manager in the cafe who talked fervently about the school programmes, events and projects that are all going on, every detail carefully thought out. Bird hides have been placed around the lake where visitors can see kingfishers, woodpeckers, hobbies, lapwings and wading birds, to name just a few. The tracks once used by the big vehicles and machines that once dug this place out of the countryside are now the paths you can walk around and admire the view. The feeling at College Lake is one of being very much close to nature, even the car park is screened from view by trees and hedgerows. It’s quite a strange thing to be somewhere so wild and fallow which is actually a man-made place designed for the sole purpose of making concrete. A lorry driver who worked on the site campaigned for years so that the site could be designated a nature reserve and in 2000 Castle Cement leased it to The Wildlife Trusts. The projects and events encourage visitors to experience nature first hand and learn about the countryside and it’s importance. The manager told me about a popular American theory which states that as buildings and industry take over the countryside people are beginning to suffer “Nature Deficit Disorder”. I totally get that, and talked a lot about the Museum of Rural Life and the work they are doing to try and get important countryside issues raised and into people’s thinking, getting that important link back between land and people.
I managed to finish my locally sourced cheese and chutney sandwich throughout the length of our chat (about half an hour) without talking with my mouth full and taking small embarrassed bites, it was a tough thing to do. I was then left to wander around the lake and it was beautiful, here are some pictures (I especially like the dad’s day out one – well done men). 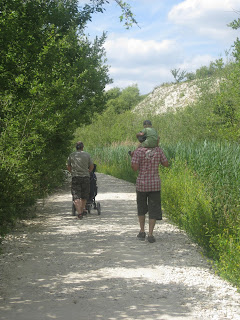 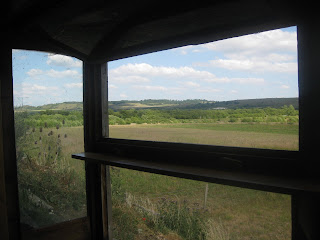 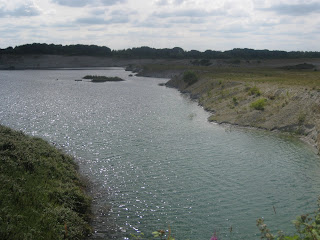 There were brilliant information boards next to the paths which explained the history of the lake and what it would have been like in prehistoric times, a massive mammoth tusk was even found during quarrying, a replica of which is displayed under glass in the entrance lobby of the visitors centre. This was my favourite picture on a board… 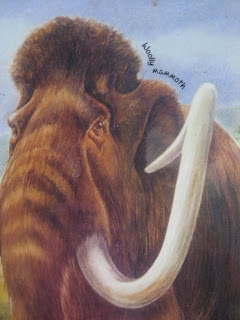 Of course I took this path… 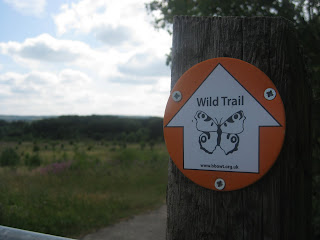 And I was both impressed and excited when I saw this plaque on the rock below stating that Bill Oddie opened the nature reserve in 2000. You wouldn’t ever expect Bill Oddie and Castle Cement to be associated for any reason would you? Well in a happy juxtaposition you see them united here… Quality. 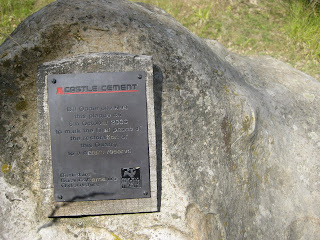 My visit was absolutely lovely and totally unexpected. The lake and its surroundings is a thriving wilderness and you can just feel it exuding it’s happiness that nature has finally totally taken over a place which was once dominated by the mess and noise of machinery and industry. Wild flowers grow high and untouched, birds are beginning to come to the lake regularly with their seasons and the water is the crystal clear. Idyllic. It really is a little oasis of calm quiet and begs you to sit and feel nature all around you. As a brilliant bonus to top it all off the visit was completely free because it is managed by The Wildlife Trusts – another great reason to get down to your nearest reserve ASAP!
After my walk I ambled back to the car feeling tranquil, I tried hard to keep this feeling with me, but sadly it didn’t last long when I had to head back into the sweaty smog of London, have steaming rows with cab drivers and sit in traffic jams for as far as the eye could see.
Time to poach that nature reserve manager’s job methinks…