A little farm and a not so little vineyard 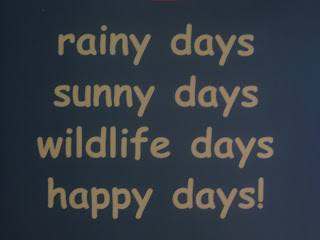 Today I decided it was time to discover a vineyard via The Brown Sign Way. A lot of attraction types are being ticked off the list now so I think it’s time to be a little more focussed in my approach to my brown signing (I’ll still go to all the random places I happen upon too though, don’t worry). My sister and I got into my just MOTed and legal (if still smelly when braking and rattly when accelerating) car and headed for a vineyard brown sign near Dorking. Xfm were playing some belters so Jo and I Florence and The Machined our way to Surrey. Maybe it was the enthusiasm of our singing or perhaps the car was suddenly faster for finally having a mechanic under it’s bonnet, whatever the reason we arrived (very unlike us) an hour early for the winery tour. As with any time I ever have to kill I kept my eyes peeled for a brown sign, luckily I spotted one in the shape of Bocketts Farm, I followed it.

Bocketts Farm is just outside Leatherhead, its easy to find, just follow the stench. When we arrived we were greeted by this placard. The more beaten up and ragged the signs, the more I love them, so this one was just perfecto… 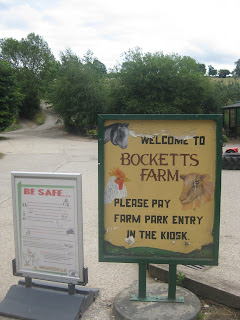 Old signs make me feel all cosy, no sparkling marketing and fake smiles here, just honest people wanting to share their passion with you, no frills, the kind of attractions I like best. This sign screams “we’ve been welcoming visitors here for ages we don’t need to attract you with anything fancy, just come right on in, you’ll love it!”, and I have a lot of respect for that.

The farm was full of school groups and family days out, which I was happy to see. My last visit to a farm park was just after the E-coli outbreak at a rare breeds farm last year, and staff at that little Kent farm said that visitor numbers had dramatically decreased since, leaving the future of many farms like theirs uncertain. Here the washing facilities, numerous signs about safety when touching animals and the abundance of alcohol gels made it clear they weren’t taking any risks.
Straight away Jo gravitated towards the goats, but to be honest I think that was an error. Having just taken up her photography full time I think she clearly hasn’t quite learnt that you don’t work with children or animals, unless you’re prepared to be massively frustrated and screaming after about 10 minutes. She shouted “goat”, “goaty”, “goaty goaty goaty”, “goatington”, “goatarama”, “goataroony” and variations on that theme for a while to get the poor thing’s attention. It was a while before she realised it really didn’t care about having it’s photo taken and was checking her out soley as food potential. When it discovered she had none it left her well alone. This is a picture of her getting frustrated… 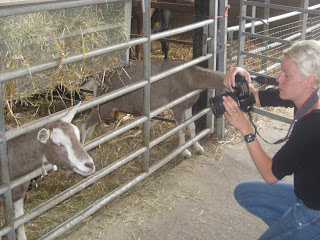 However her efforts weren’t completely wasted, nice goaty goaty goaty. I think it quite liked her after all the attention she way paying him, look he’s winking. 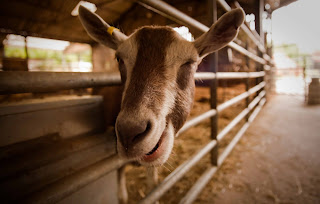 We muscled in on a hands-on school group session about milking but as I was clearly not from the local primary I didn’t get a go on any udders, boo. We walked around the smelly sheds, listened to the animals and children making as much noise as was possible to make then headed outside for some respite. This board (and boards like them at any attraction) made me very excited. 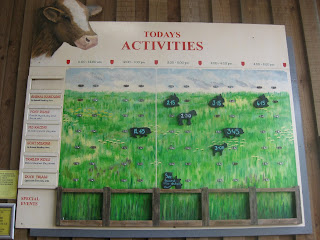 Unfortunately we had to miss the pig racing at 12.30. How I would have loved to see that, I don’t know whether it’s even legal is it? There was a lot of farmyward activities on, those farm hands are a bunch of very dedicated people clearly.

The farm has recently planted up a big kitchen garden which aims to educate children about where our food comes from (something I am passionate about) so I was very impressed to see it completely full of kids, smelling the herbs, pulling up the potatoes, eating the rhubarb (someone’s going to have an upset stomach tonight) and generally enjoying the kitchen garden experience. This is the big lavender patch with a bee hive in the middle. 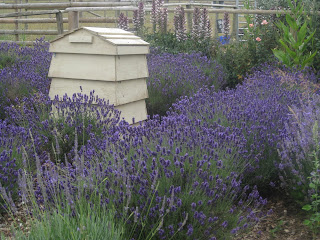 It was literally covered with bees, only a good thing really considering the current plight of the humble bee, not so good sadly for people like me who make loud involuntary noises when flying insects come near them. I moved away from the lavender to take some pictures of a donkey, only to find myself standing on a red ants nest, ad getting bitten at least 8 times too. I started to go off the farm. 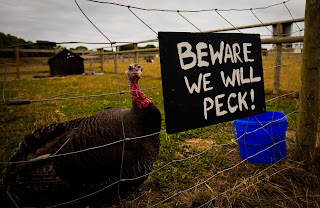 A toast to Hans anyway… 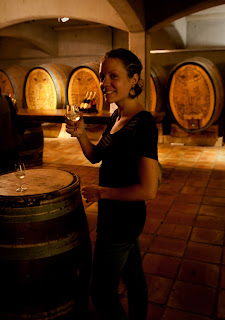 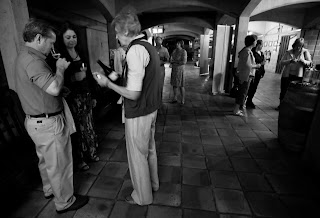 After the brilliant tasting with the very-generous-on-the-helpings Mona. We were off for the land train trip through the vineyards up to the top of the hill of the estate. The views were amazing. 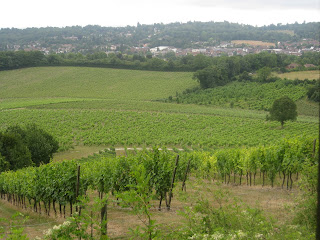 Despite it being mid July it was freezing though. As a seasoned brown signer however I came prepared. The picture you see above is the only one I pulled my arm out of the snuggled up state you see us in below, we stayed like this for 2 hours. 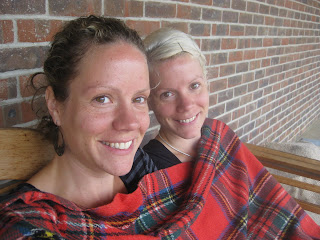 The vines were beautiful and the scenery was gorgeous, but to be honest I felt a little bit as though the deep rooted passion for wine had been somewhat overtaken by the need for visitors and the money brought in by sitting them on carriages and pulling them along in a Land Rover. I really do love all things touristy, but when Mona told us that this place was only built with visitors in mind (with conference suites, marriage licences, tours, fully loaded gift shops and the like) it made me feel that we were in more of a theme park about wine than a working vineyard one can also visit. For the second time that day I was left feeling that the attraction had be carved up into 2 distinct realms, and it was visitors and tourism that took priority. 80% of the wine Denbies produce is sold in the restaurant and gift shop, indicating it’s even more about getting people through the door. I felt that Denbies produced its wine to sell to its visitors, that the Land train rides were just another element to a visitors’ experience, but there seemed to be no passion or meaning behind these things. Mona had passion, thank God, and that came shining through, as did her disdain for the visitors who didn’t come for the wine experience, just the restaurant deals.
That said the visit was good and informative, the facilities were excellent and the staff (Mona – ace) were brilliant. Also, just as a quick aside (something I didn’t learn here FYI), if you want to support our vineyards then buying a “British” wine won’t do it. “British” wines are made from imported foreign grapes which are only processed and bottled here. If you want to buy truly British wine choose a bottle that has an English or Welsh label (there will be Scottish wine too in the coming years too I am told, excellent).
More brown sign adventures to come, I need to go fishing badly, I’ll let you know how I get on, for now though chin chin, up your kilt and cheers.