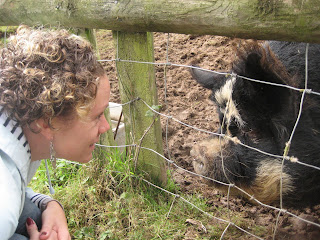 So the second leg of my trip began on Monday, after a small delay to the tune of mother-gets-pneumonia. The family holiday down in Torquay turned into a sisterly 4 day break. My mum insisted we come down without her and she was feeling a lot better when we left, so please don’t shout at me for going, thank you.

We (I) drove down without any stops, despite Jo’s ever louder shouts during the last hour because she needed a wee so bad she insisted her bladder was going to burst if we didn’t stop, but I wanted to press on, so I hoped it wouldn’t and carried on driving while ignoring the shouting.

We got up after going to sleep at around 9.30pm (when you spend so much time with someone you start running out of conversation and not bothering to pretend you want to hang with them when you don’t), so this is us bright and fresh yesterday morning… 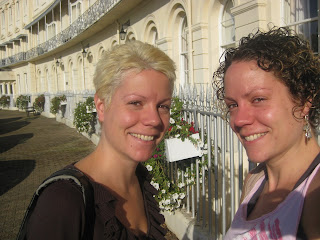 When you’re in Torquay and have a look at the map to decide where you’ll go, the first place anyone with an immature sense of humour heads for is Cockington, so to Cockington we went. A little thatched village which dates back to Saxon times, Cockington has a little school, mill and manor house turned craft centre. Apparently we chose a school visit day to visit and droves of school children with clipboards were interviewing visitors about the reasons for their visit. Unfortunately there wasn’t a box for “it had a hilarious name and I wanted my picture taken underneath the village sign”, there was much stifling of guffaws. Our hysteria got a bit ridiculous so after visiting the craft centre and forge we thought it was probably time to leave. It was very beautiful there and the little cottages were so cute. Despite the village not having a specific brown sign symbol it did have brown signs pointing the way to places all over the village, so Cockington counts. 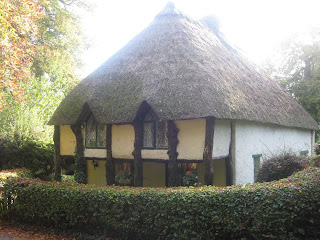 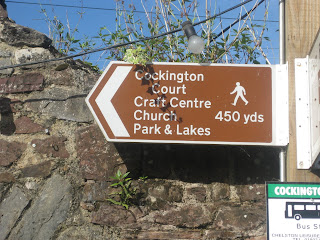 I wanted to go to Dartmoor mainly because I’ve never been there before, it’s also all a bit bleak and scary, and there was also a plethora of red writing all over it in my AA tourist map of Great Britain, so I hoped brown signs would be abundant. I haven’t done an English rose brown sign symbol yet (denoting an English tourist attraction) so when I saw this sign we clearly had to go in. 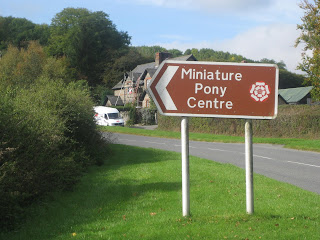 Obviously there were a lot of miniature ponies, but there were also donkeys, horses, guinea pigs, rabbits, ducks, chickens, pigs and the like. As with most of these farmyard attractions though there was a lot for children to do, but not so much for adults without children to do. I did want to rub off the “to” on this sign to make the pony rides accessible to 29 year olds, just like me, but think I would have squashed the pony to the floor if I did get a go, those miniature ponies are seriously miniature. 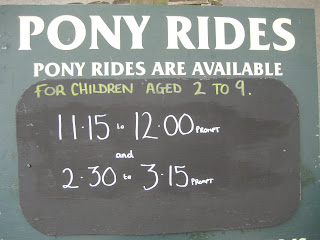 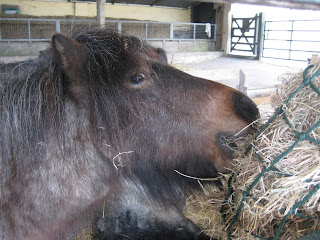 Instead we hung around the pig pen and shouted “piggy” and “oi pigs” and took photos of these gorgeous piggies. See, he loved me, just FYI. 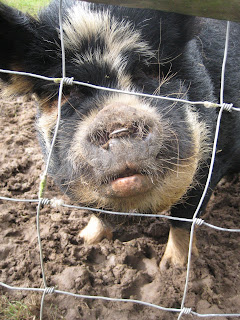 Driving in Dartmoor was lovely, if a little hard on the car. Since the near car death experience a few weeks ago I now pay neurotic attention to how my car sounds and when revs get high and it sounds bad and when putting one’s foot on the brake sounds bad it doesn’t bode well for a happy and calm driving mindset, let me tell you. Unbelievably though it didn’t break so I tried to pretend I was driving a better car and swore I’d never cain it around like this ever again (even though I know I will, probably today). Dartmoor was spectacular and just driving through and stopping to take pictures didn’t touch the sides. As much as I’d love to have walked some long walks though I actually don’t think I physically could have done. I think my right knee, which I clearly overused during the beginning of my trip, is broken for good. Woopsy. Just being on the moor was brilliant though, despite it being in the car. I always get a little shiver of excitement when I go over a cattle grid, it makes me feel properly out in the wilderness with the animals and nature. I had to take these pictures to illustrate what I mean… 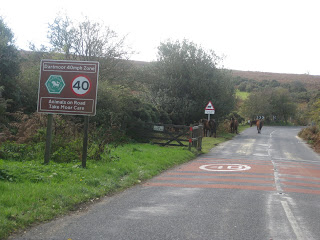 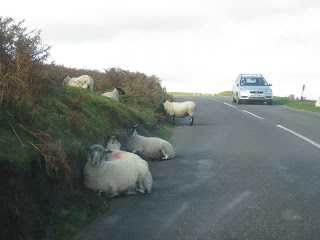 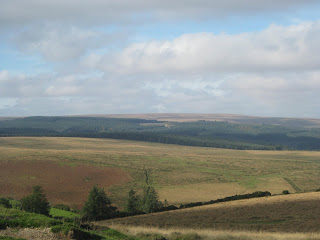 On the way to one of the most random brown sign stops of the trip we stopped off here. I love little out of the way potteries and always try to buy something as a souvenir and to put my little effort in to keep them in business. This pottery however quite clearly didn’t need any help surviving, or if they did they were putting off people like me with limited means (read: poor people). The jug you see in the forefront of the picture cost £40. I left empty handed. 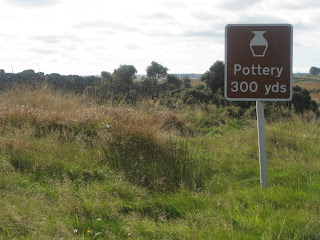 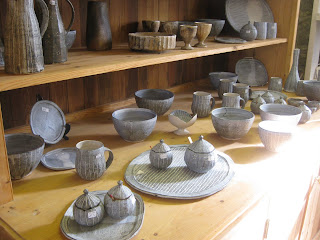 Next stop was a place my sister insisted we visit… 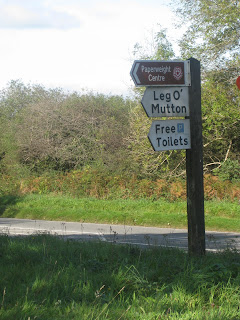 Doesn’t look very interesting does it? And even I, heralder of all things a bit weird, wasn’t that eager to visit, but Jo insisted that paperweights are romantic, when stupidly I had assumed them boring. Predictably I was soon to be proved wrong. 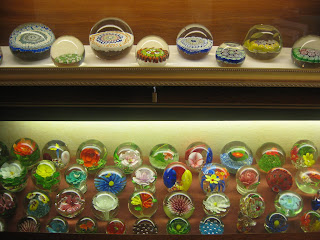 As soon as the bell tinkled as we walked into the paperweight centre the owner shot up to tell us all about the origins of the centre and everything one could ever want to know about paperweights. The man in the picture below set up the centre, originally a private collection he began to display them in the post office where he used to work. It began to expand and become a popular little attraction in it’s own right, so the centre was set up to meet visitor demand to see the paperweights. Since the original owner’s death the current owner has kept the centre going and organises lots of cool paperweight related activities, like getting glass artists into the shop to demonstrate just how it’s done. 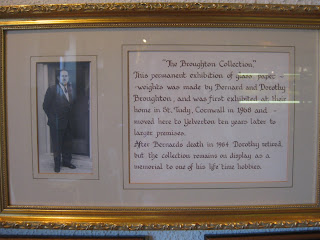 After a full description of the three main types of paperweight and how they’re made we had a look at the collection and Jo bought one. She LOVES paperweights man. She wishes she could have bought this one but sadly it was part of the permanent collection. 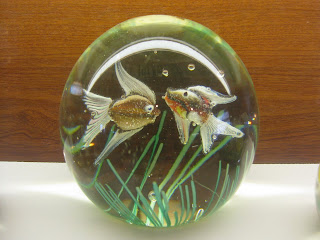 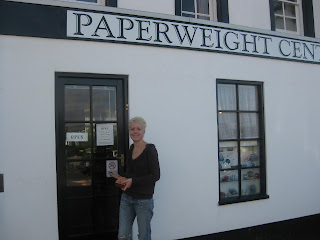 After getting a bit paperweighted out we headed for Plymouth, mainly because the tourist map had a visitor centre at the Plymouth Gin Distillery marked on it, and that got me excited. I hoped beyond all hope that it had a brown sign. It didn’t. But that’s right ladies and gents, we went on in anyway. 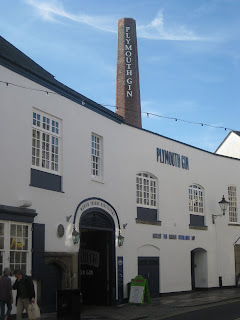 Predictably we had just missed a tour around the distillery, as is often my luck with all this random rocking up to attractions without any planning. There was a spanking cocktail bar upstairs which we decided would be the next best experience after a proper tour so we went up there and made ourselves comfortable. I ordered a Gimlet, just like Raymond Chandler’s private detective Marlowe, see? 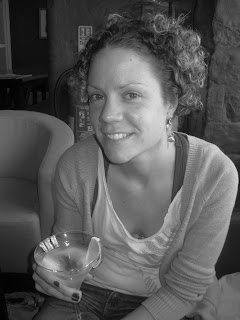 This cocktail has 2 ingredients, gin and lime cordial, and believe me there wasn’t much cordial in there. I had to have a little sit down before I drove back to Torquay, and got a coffee to see if that helped. 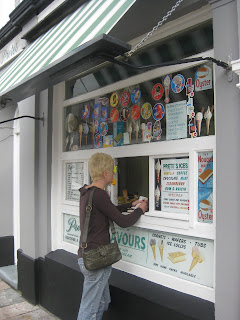 We set off again for another rally style drive back which I wasn’t really up for because I’m now genuinely worried about my car, maybe it’s time to join the AA? Proper planning and preparation prevents piss poor performance after all.
We got back and went out for a lovely meal in our hotel restaurant, brilliantly named Langtry’s (RIP Beckenham’s Langtry’s, damn I miss that place) where we ordered post dinner large whiskeys and got quardruples. How I reigned Jo in to not go and hit the happening streets of Tuesday night Torquay I really don’t know, maybe tonight it won’t be so easy…
« Older blog
Newer blog »