It was weird to be waking up in my own bed yesterday, and strangely part of me wished I was in a far away place with unknown adventures to be embarked on ahead of me. That lacking, I got up and did the gigantic mountain of washing up which has been accumulating because the dishwasher is broken, oh it’s good to be home.

I headed for All Hallows By The Tower church, oddly enough right by the Tower of London. All Hallows is a gorgeous church founded in 675AD which has a long and rich history. The Great Fire of London started in Pudding Lane just a few hundred yards away but the church survived thanks to the efforts of local people and Samuel Pepys himself watched London burning from its tower. During the Blitz the church was almost completely destroyed, but the bombs did reveal an arch from the original church and underneath that part of some Roman pavement was later discovered. It was pouring with rain outside and maybe it was for this reason or maybe it is always the case, but there were a huge variety of people in there looking around, from tourists to city boys, and of course me.

I went up to the information desk where an old guy was doing some brass rubbing. I complemented him on his work and asked if I could possibly have a go. He was very happy to get me set up and chat chat chatted all the while about choice of colours and technique, he knew his stuff. First I had to choose a brass to rub, and there was way more choice than I thought there would be, it was quite a dilemma. I didn’t really want to do Mary or any kings or queens so I plumped for a St George and the Dragon scene. I was informed that this was a very popular choice with the children. Of course it was. When I realised I had no cash I said I’d just pop out and get some, the old volunteer was so eager to help he jumped up and said he’d look after my bag while I was away and proceeded to hoist my handbag onto his shoulder and assumedly carried it around the church like that until I got back, because there he was to greet me 5 minutes later with my massive pink handbag still over his shoulder. He was so cute I nearly cried.

When I had chosen colours (gold and red, controversial) I set to work. As much as I felt like I’d been shot back to childhood (and therefore a bit of a knob doing brass rubbing on my own in a church in the middle of London) it was quite therapeutic to sit and take time to colour in (that’s what it felt like), I might even do it more often. Soon George and his horse were coming out if the page at me and my masterpiece was coming together. I was impressed with myself. 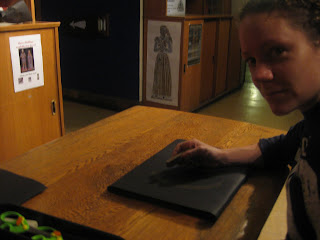 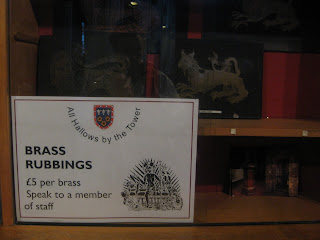 About half way through, as I was starting to get the knack, the old volunteer came and brought his own brass rubbing over and soon we were rubbing our brass and shooting the shit together. I asked him all about the history of the church and he had lots of anecdotes about the visitors who go there. He said brass rubbing is very popular and that it’s a great way to get people to get an hands on experience of history, when I showed surprise that it was so popular he gave me a confused look and said “well you’re doing it aren’t you?”. He had a point. He said American tourists especially love the pursuit and nearly always choose Henry VIII to rub, for some unexplained reason.

When I had finished my rubbing the kindly volunteer said it was very good, except that I could have rubbed harder on the gold border to make it stand out more, then rolled it up carefully and presented me with my art in a tube.

He said I should come back again soon if I wanted to choose another brass to rub. I said I probably would, maybe I’ll do Henry VIII next time.
After brass rubbing I wanted to go shopping. I know this isn’t a very brown sign related activity but I need a dress for Saturday, and not just any dress, a black or white or combination thereof dress so I needed to go shopping. I was about to get on the bus when I saw this sign… 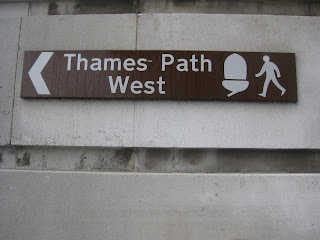 I was headed west, Covent Garden west, so it was a long way to walk from Tower Hill, but the brown sign determines every aspect of my life at the moment, so I had to obey. My right knee hates me but I walked a lovely long walk along the Thames and felt brilliant to be back in London. Finally I got to to Covent Garden where I spent many hours pulling clothes on and off myself and making my already crazy hair even crazier, it wasn’t a good look, but I did manage to find a dress. Just as I was feeling bad for spending so much time on a non brown sign related activity I saw a brown sign for “the seven dials”, and there, right at the end of Long Ache and covent garden is a pillar in the middle of the roundabout with seven sun dials on the top of it. I took a picture to prove my afternoon shopping was brown sign related because I was shopping in the seven dials area of London. Bonus. 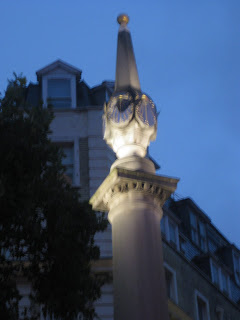 I got back on the train and was Beckenham bound for Wednesday night drinks in Pat’s, which was needed, I’ve missed it bad and by golly was it good to get a fix.
« Older blog
Newer blog »