The universe and things over which we have no control 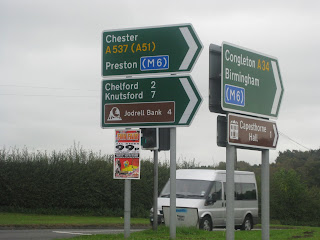 Yesterday was not such a good day, but it did start well. I had seen brown signs on the way into Sale for Jodrell Bank, the symbol on the sign was not a generic one, but it was intriguing one none the less. I decided I’d get up early the next day to go and check it out.

Unfortunately for me my plans didn’t go as I imagined, as Eleri and I went down the the funeral wake in the hotel bar and had a few too many drinks with dinner, so we woke up feeling not so good. I also woke up in my clothes which is explanatory of the situation. Fun though, if not so brilliant for the mental health when travelling around on your own. Ho hum, I went off to discover Jodrell Bank anyway. It turns out to be a massive great dish using radio waves to explore the universe. It was very big and moved eerily slowly. 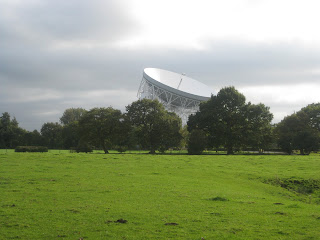 I watched some 3D shows with lots of college students and learnt about all things universey, of course there was the odd comedy moment thrown in when meteors flew out of the screen at us and everyone screamed (not me though you understand). I walked around the massive dish and took photos of the thing. Again I found myself fascinated by the people who first think of genius ideas of doing amazing things and setting up places like this and explore and discover what was once thought undiscoverable. Despite my hangover I was impressed, so I bought a booklet.
Next destination was the Peak District. I’ve booked into 2 different youth hostels on Tuesday and Wednesday night, the first one in Hathersage, of Bronte sisters fame, so I typed the post code into my trusty sat nav and set off. Now my car isn’t the best car, I’ve always known this, but as I was driving through the Peaks I was sure my car was sounding worse and louder than normal. I called my mechanic friend Clark who diagnosed the problem as a hole in the exhaust through me waving the phone around and trying to imitate the horrendous noise coming from my car. I was on the look out for garages but wasn’t too worried, stupidly. Disaster inevitably struck though whilst climbing a hill (there’s lots of them) in the Peak District with a dirty great Audi flashing its lights and honking at me to get out of the way because the noise was becoming deafening and I certainly wasn’t doing the national speed limit. I was pulling my car over to the side of the road when what I assumed to be an engine dropping onto the road noise occurred. I got out to find it wasn’t the engine (although I wouldn’t have been surprised) but in fact my car’s exhaust lying on the road. It was foggy, raining, I didn’t know where I was, I had a hangover and I hadn’t got AA membership before I left. I phoned Clark and cried for a while. When he suggested faking being someone I am not, forward thinking and organised (i.e. my best pal) and someone who does have AA cover, I started to cheer up. So with some more crying and pretending I had no ID and various other ruses the AA man finally came out to diagnose the problem (although I don’t think it really needed diagnosing). A sweet northerner came out of his house while I waited in my car and offered me a sandwich. Why I didn’t say yes I really don’t know because I was starving and stressed, idiot. Northerners are so nice. 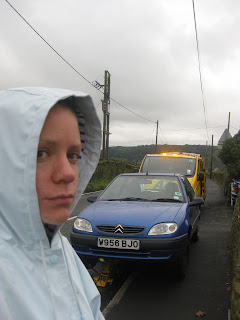 The AA man tied the exhaust back onto my car, clearly he couldn’t be arsed to tow me to the garage though so I limped back to Kwik Fit in Macclesfield while onlookers gaped as what sounded like the first motor car ever invented trundled pathetically past them. It was embarrassing. The Kwik Fit men did their quick thing and after about 5 hours I was on the road again. The drive to my village was spectacular, despite the fog. 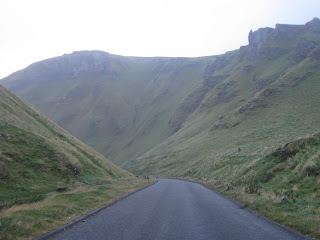 I had been dreading staying in a hostel on my own in a dorm and before the exhaust sheering incident I had contemplated sacking it off and checking into a nice B & B. Its weird sleeping in a different bed every night, and when the prospect of one of those beds is a bunk bed with loads of other randoms it gets a bit depressing, but when the cheapest B & B would be £50 (and not in this location) and a hostel is £9.95, it makes financial sense to do the latter. After my car incident all I wanted to do was get to that hostel. So I drove through the fog hoping I wouldn’t crash into oncoming cars and found the lovely village and actually very nice hostel. I found out no-one else was in my dorm so I was even more ecstatic to be there, I made up my bed with the linen provided and felt close to alright again for the first time all day. 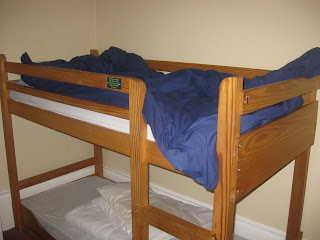 When I said I would be drawing on friends far and wide on this trip around Britain I include in this definition people you meet outside pubs at 3 in the morning, namely Andy (from Sheffield) who I got chatting to outside Patricks of Beckenham a few weeks ago. Now don’t all balk (parents/aunties) he’s nice and took me out for a massive dinner in a lovely pub, which I really needed after my terrible day. I also got to see an owl sitting on a sign on the way back so that was a bonus too (I took a picture of it but you can only see its eyes, see?). 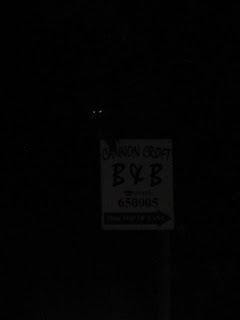 After my unstoppable yawning (my tiredness not him) I happily got into my bunk and went straight out for the count. Walking and various other activities are planned for today, but after yesterday I think I really need to get some brown signs in. Caves, tea rooms, more nice pubs…? We’ll see, but whatever it is I’m looking forward to it.
« Older blog
Newer blog »